Next up in our series on the The Lost Women of NXIVM mockumentary is Joseph O’Hara of Albany, NY. O'Hara was an attorney who worked for NXIVM from October 2003 until he "quit" in January 2005.

Seems Joe took a page from Parlato's book and he too tried to steal from the Bronfmans; just one of a multitude of tidbits that doesnt exactly inspire confidence in O'Hara's feedback on NXIVM/Lost Women.

From Lost Women, the gist of the interaction between Parlato and O'Hara:

Keith Raniere and company clearly didnt do anything regarding Kristin Snyder's disappearance at the time, because until the (agenda based, strange quotes and shoddy) Dennis Yusko article appeared in February 2004, Raniere and company didnt know they were being blamed for her disappearance. Snyder's parents (seeing dollar signs) boasted at Kristin's memorial, that they were going to "sue" ESP, as well as take/sell Kristin's truck. Obviously they did not have any grounds to sue, nor did they receive Kristin's truck, despite Heidi Clifford agreeing publicly that they would. The Yusko article was a last ditch effort by Snyder's parents to conjure up some sort of motive (where none existed) to get money from ESP/KR, NOT info/justice for their daughter. 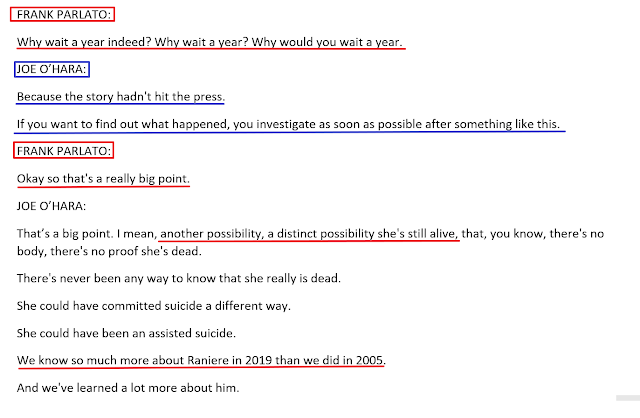 What we have learned about KR between 2003 and 2019 is that he was notoriously litigious, he would kill his believed enemies...in court! As every person that he believed crossed him found out one way or another!

Clearly Parlato either failed to follow O'Hara's advice, or he didnt like what he found (as can be seen in Lost Women when he goes to the Anchorage PD!) because none of it held up his wild inane speculations about Snyder's still open missing persons case in relation to Keith or ESP/NXIVM.

When Frank Parlato spoke to The Voice, for some reason Parlato hide behind the name Phil Robertson, according to depositions taken in the case....Robertson (Frank Parlato) also claimed that O’Hara is a corrupt lawyer who is sure to be eventually disbarred and accused him of embezzling $250,000 in NXIVM funds.

Interesting that Parlato apparently called out Joe O'Hara as a crook, yet includes O'Hara in Lost Women as if he is a trusted expert!

Oh look, Parlato was correct, O'Hara was in fact a crook whom the Feds took down for STEALING from mentally disabled children! Enemy of his enemy may be Parlato's friend, but he certainly is not any kind of expert on Kristin Snyder!

In the meantime, if anyone has any information or would like to join myself, Mrs Dirt and our small but growing network invested in seeking truth and justice for Kristin Snyder, please email us at Justice4Kristin@mail.com