Let me begin this post by stating full stop, this blog's focus has always in one way or another been focused on Homosexual females, this post is no different. And while this post might not appear to be centered on Homo females, as Tilly from Miranda says "Bear with"!

As my wife and I have been busy with the recent holidays and another project (that yes is Homo female focused) it might seem like we are not aware of what has BEEN going on in areas online/offline that affect us, we are btw. We have both chosen to keep out of internet nonsense unless we feel it is worth our precious time. For me, this is such a time.

I have had multiple readers, including some Radical Feminists asking me to write something on the Homophobic Hate group WoLF. I have until now refrained because frankly, they were not really worth my time. After given a recent heads up on their latest Hate Speech filled "evening" scheduled in NY this Friday, specifically the Homophobes speaking at this engagement and another deplorable incident brought to my attention, I emphatically said YES, I will write something on WoLF and their Homophobic members/agenda.

The event in question is this:

I will largely focus on those speaking at this event and a few other WoLF hangers-on.

In the order from their website the speakers are as follows along with my comments on them:

Dominique Christina's claim to fame is slam poetry, of which she does well. She does not appear to have done any sort of work on gay, lesbian or transgender issues. I can see only one reason WoLF was interested in having her join their little band of enmity for this occasion.

Het privileged Homophobe Libby Emmons is so violently Homophobic one feels just skimming her writings like they have been queer bashed! A few quotes from Libs as an example: 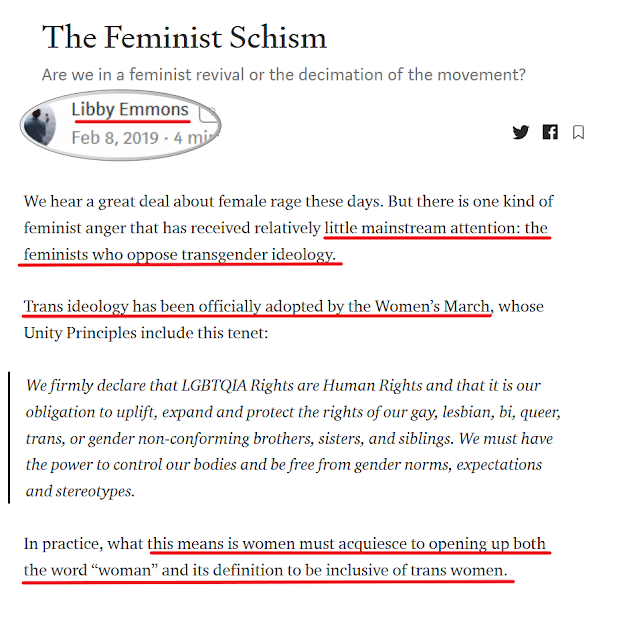 I dont know if Libby is too busy being a mom/writer to do her research, but it is patently clear she knows little about how transgenderism was green lighted by Radical Feminism. Something WoLF states on their own website is their aim to "ultimately dismantle the gender-caste system". Umm Libby? WoLF? Congratulate yourselves, you are succeeding! Men are legally women all over the world thanks you and women like you! Also by Libs is this offensives garbage: 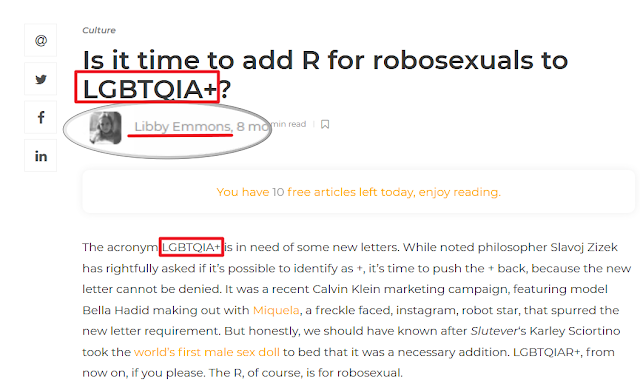 While Libs is being somewhat facetious, I have to ask WHY DID LIBBY CHOOSE TO FACETIOUSLY ADD THE "R" TO THE LGBTQIA and not to Heterosexuals? Could this possibly be why:

This is from the DSM I (1952). Clearly Libby Emmons believes fucking a robot is the equivalent to being a Homosexual ie pervert! Again Libby fails in her research department because there is a vast difference to being Homosexual (begins at conception ends at death) and a Heterosexual male banging a replica of a human. Thats right Libs, HETEROSEXUAL MALES ARE THE ONES FUCKING ROBOTS NOT US! Keep YOUR perverts in YOUR lane! Thank you very much!

Linda Bellos, like many who associate with WoLF is a hands-across-the-errr-cocksucker of the Homophobic Heritage Foundation who are known for such bullshit as this: 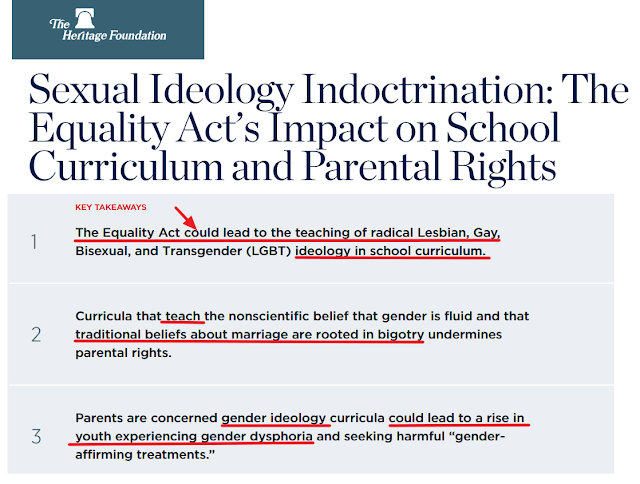 Heritage Foundation is a Hate group using scare tactics to frighten the general public and honey poured on their cocks to entice the gender crit ignorants such as WoLF. But I digress, a few quotes from an interview with Linda: 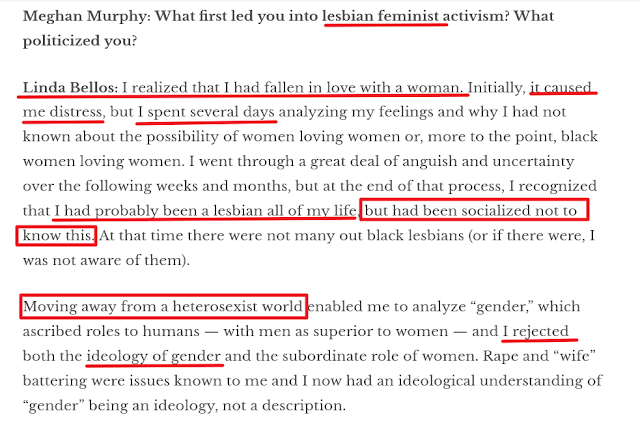 In other words, Linda Bellos CHOSE to partner with women, she is NOT a biological Homosexual and as such, she does NOT have OUR particular interests and needs in any capacity in mind! Explains how she can hop on the Heritage Hog so easily! Like a few others in the UK, Linda got herself into a pickle when she verbally threatened to bash some male trans online: 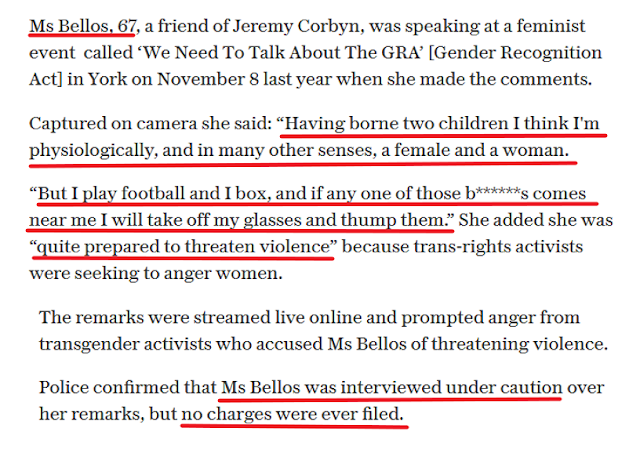 Funny Linda screams the old transwomen arent women slogan, yet she refers here to male trans as "bitches"...Hmmm. While it is its own nonsense, nevertheless this kind of behaviour is as unproductive as it is ridiculous.

Meghan Murphy is probably most known for the largest cry baby tantrum ever seen on social media when banned from Twitter for flagrantly not following Twitter's TOS.

Big tech giants, like anyone, anywhere are counting on you as a user to follow the rules/guidelines you agreed to when you signed up. It does not deserve my time or my donation! Along with her inability to follow basic social media guidelines, she will however use her own platform to slam Homosexuals: 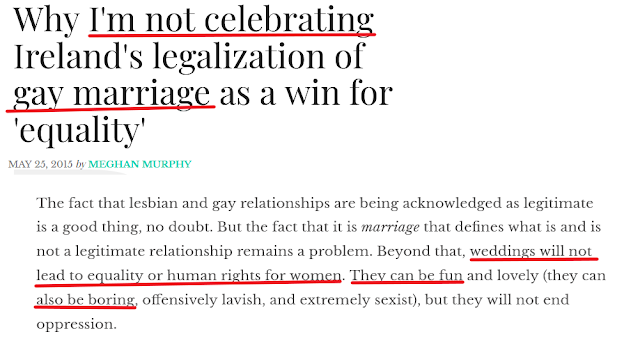 These types of HOMOPHOBES are the fucking worst! Its a big fat backhanded (oh I'm sure homos marrying is ok, getting hitched might even be fun-BUT), yeah, fuck you too Meghan Murphy! Never in my life did I even think I would get married. Not because I didnt want to, but because I never believed for a moment it would ever be humanly possible! Fortunately that possibility came shortly after the right person came into my life and until that moment that we both said our "I do's" did I realise just how much Homosexuals have been denied, because trust me when I say, being married DOES make a difference and with the right person it is a beautiful thing! Marriage is not about fun or sexism, it is about love with legal protections from bigots like the Meghan Murphy's of the world!

Natasha Chart has this to say about herself: 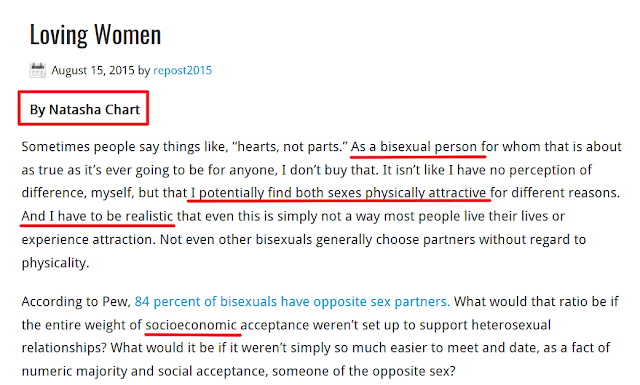 Basically Natasha finds men and women both attractive but men make more money so sorry ladies Nat is strictly about about who can best finance her. Given that we shouldnt be surprised by this: 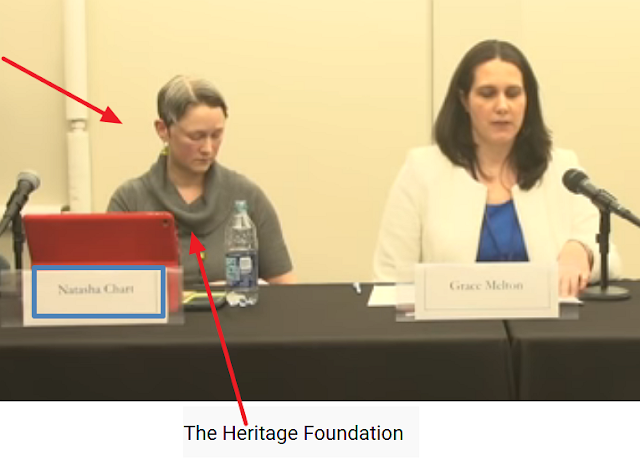 Yes, you read that correctly. Natasha Chart is another patron of the Homophobic Heritage Hog! And since she is a board chair for WoLF we can see why WoLF is drowning in a sick seabed of Homophobia!

Posie Parker has long been known to be a virulent racist and Homophobe, my wife and I can both personally attest to her Homophobia. PP (wife and mother-careful PP Meghan doesnt approve!) uses the idea of motherhood to extend her motherly (lol) instincts to children being transitioned. And like most Gender Crits once someone has reached adulthood:

Apparently PP does not think motherhood should extend to trans females regardless of point in transition. This from a woman who spends more time telling other women how to be mothers than being a mother herself. Now to address a speck of the rampant Homophobia that PP routinely spews: 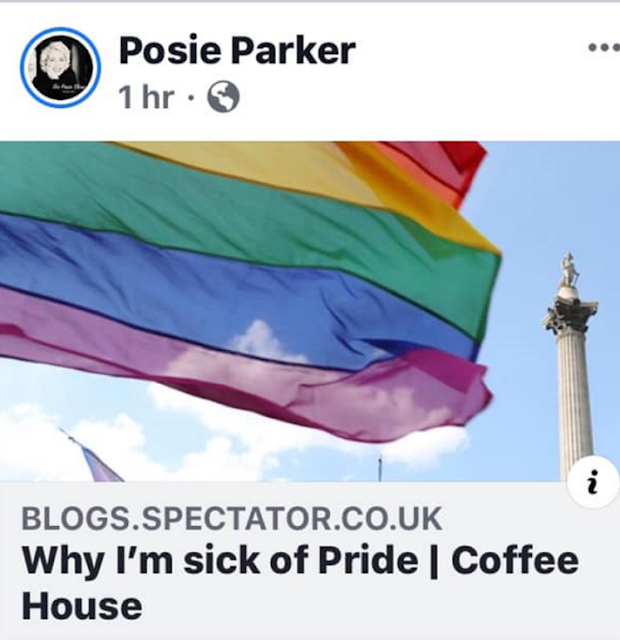 The type of Homophobic articles Posie Parker enjoyed sharing on her Facebook before her account was rightfully suspended. 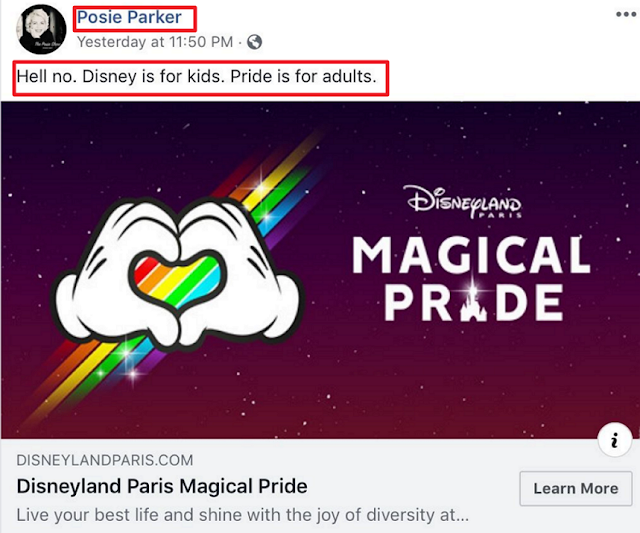 I pray her children are not Homosexuals. Apparently PP is too ignorant to know us adult Homosexuals were once child Homosexuals! 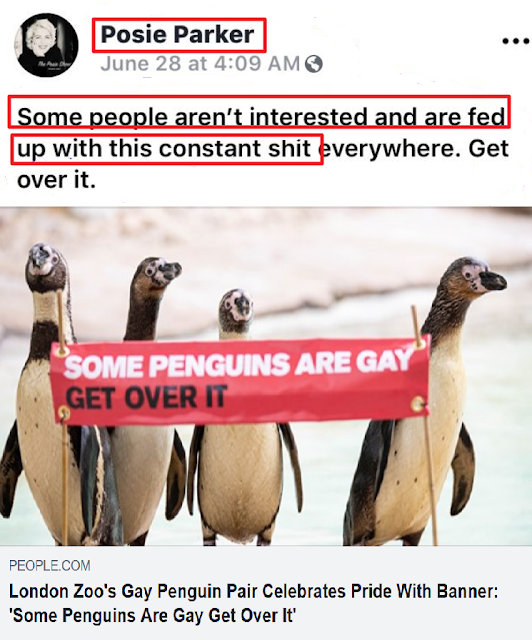 Homosexuality according to Posie Parker and I quote is "SHIT"! As Posie was cautioned over her nutfuckery in the UK, she came over the the good old USofA to peddle her hate by harassing a male trans at work of all places:

I suspect thats the reason Bellos and Parker are headlining this little shindig, too fucking cowardly to speak openly in England!

The problem with self interest groups like WoLF is that their Homophobia is not contained to their little group, it spreads online like contagion. And like contagion it is usually the weak who are most at risk, in this case mentally ill women believing a RadFem group is their personal lord-ess and savior. The depths of their depravity truly knows no bounds, but more on that later. First I digress...

Before I continue, let me say, until right here, right now, you will not find a single mention of Cathy Brennan anywhere on this blog.

It is no shock or surprise that I am not a fan nor friend of Cathy Brennan's. It is probably no shock or surprise that some years ago over something I wrote here Cathy Brennan sent me a cease and desist letter. What is a shock and surprise is that I am here to call out a few of the mentally disturbed WoLFers for their infuckingsane harassment of Brennan simply because she has called out the HOMOPHOBIA of WoLF/WoLF members and other gender crits. This from one such mentally disturbed RadFem: 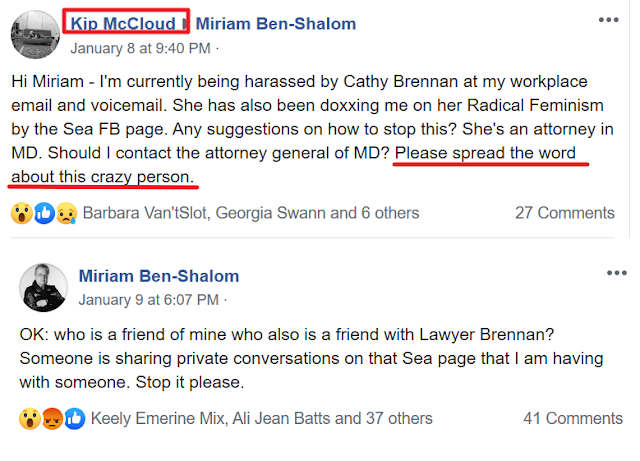 Rather than bother to investigate Kip aka Carol's claim because Brennan is on a shit list, Carol's gaslighting easily takes flame: 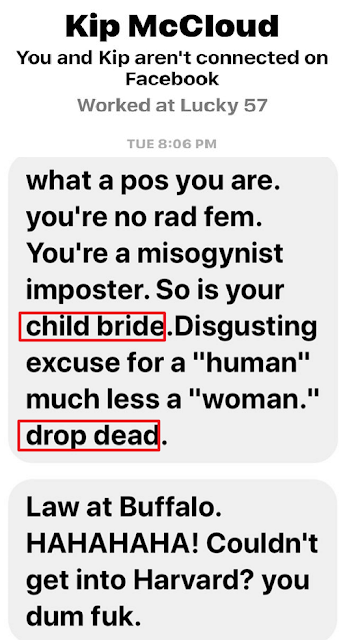 This was some of the initial harassment, it later gets much worse:
And this contagion spread: 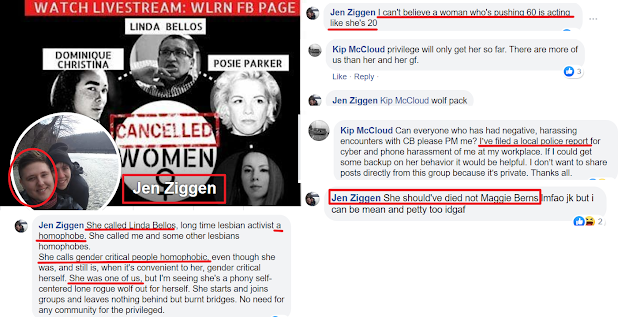 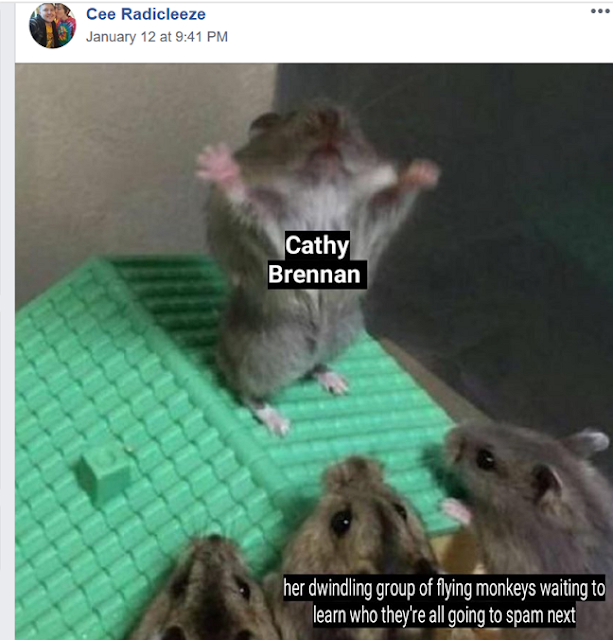 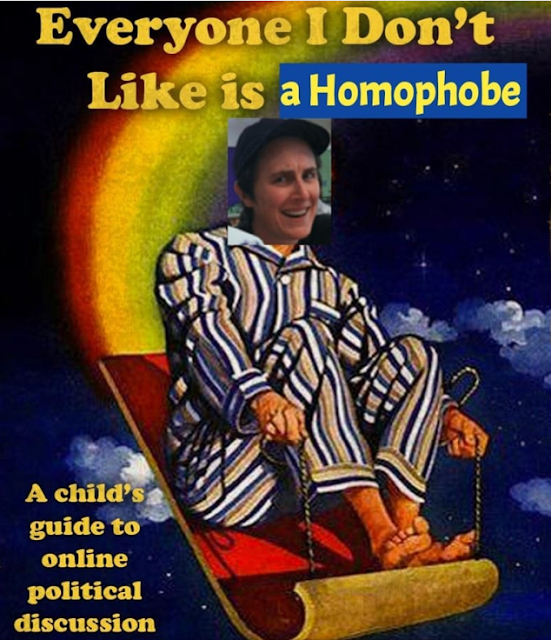 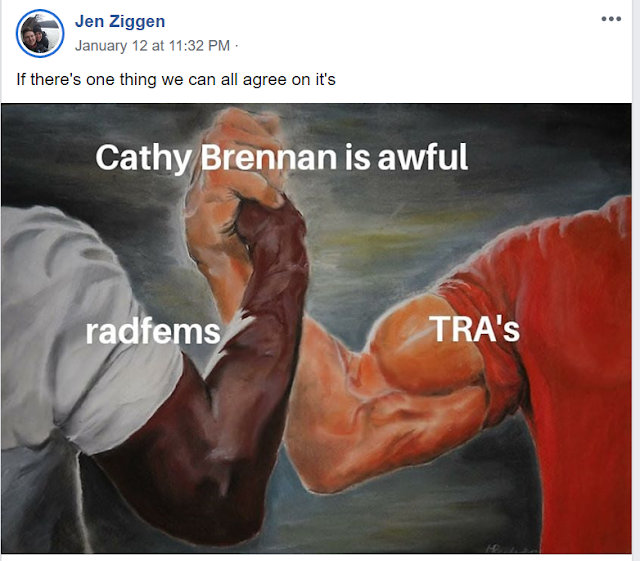 Hating Cathy Brennan is what is bringing together RadFems and Male Trans? And the stupidity award meme goes to Jen Ziggen-congrats hun you earned it!

These deplorable women would rather harass someone fighting for THEIR rights rightfully, all because Brennan chose not to hop on the we-hate-homos Heritage Hog. And harass her literally right after her father died, which in and of itself is horrible and difficult, but when a death is on or near our most precious holidays, holidays that hold some of our most treasured memories, it is an extra burden, one to be felt acutely whenever that holiday arrives for the rest of their life.

And while there are always the odd rogue hangers-on/leaches, it is up to the group to rein those folks in or release them altogether. But there was none of that, not even after the flat out psycho's making fun of Brennan's father dying or wishing Brennan had died instead of M. Berns! My wife being the Aspergerie gal that she is decided she was going to note how many friends these two particular nut fucks lost, a whopping ZERO. See this is what I was talking about with contagion, it isnt just limited to the group but to everything and everyone they touch!

But supporting right-wing hate groups, especially the BRITS who will not remotely be affected by how United States HATE legislation via HATE groups like WoLF/Heritage Foundation will affect Homosexuals, INCLUDING women who chose to partner with other women! Hello! I feel like I am watching a vicious rabid dog eat its own self and biting the hand of anyone trying to save it.

Women's Lib Front may pretend to be a WoLF in sheep's clothing, but I'm not your grandma nor red riding hood!

PS I dedicate this to Brits Posie and Linda