An outraged (rightfully so) reader sent this yesterday; a plea made by bats in the belfry Julie Bindel (oh Jules!):

By "lesbians" Jules clearly means STRAIGHTBIANS who stick with STRAIGHTBIANS and only fantasize about "the menz" while diddling themselves, they dont actually fuck men, or at least only do so when not a soul is looking. But rest assured, WE SEE YOU!

It is pure unabashed irony that the Julie Bindel's of the world fail and fail and fail again to see their own deformed logic, or rather their Heterosexual logic (sex sex sex). Mrs. Dirt and featured Jules in part of our unSTRAIGHTening Lesbian series here: UnStraightening Lesbian: Removing the Heterosexual Lens: Julie Bindel.  Jules has no trouble vomiting shit like this:

Denial is the cornerstone of STRAIGHTBIANISM, so, of course, Jules isnt convinced; she cannot afford to be. Jules blithely ignores the 99.9% of her cognitive operation/behaviour that is Heterosexual, and instead CHOOSES (her words), to make the .1% (sex with other STRAIGHTBIANS) her life's focal point, including her bread and butter which her little ranty plea is all about. Not comprehending that even THAT .1% (sex with other STRAIGHTBIANS) is also
H E T E R O S E X U A L!

Jules, hun, babe, sweets, you could lick every single pussy on planet Earth, from time immemorial and as a biological Heterosexual female? You are still a Heterosexual female. Look: I know, trust me: it is difficult for Heterosexuals to get beyond their Heterosexuality, beyond that sex sex sex sex sex drive driving you all toward babies babies babies. And yes, even those STRAIGHTBIANS who do not have children, they still use that biological drive toward children via sex, including sex with women. But Homosexuality is not simply who you have sex with Jules, we werent fucking our mothers in the womb, although that bizzaro world trying to get back to mommy's cunt does seem to be another characteristic shared by many a feminist lesbian STRAIGHTBIAN like yourself.

But I digress, it is pretty fucking deplorable to see STRAIGHTBIANS whingeing because other not as STRAIGHTBIAN STRAIGHTBIANS are getting media successes that they arent! It makes no difference whether these STRAIGHTBIANS "claim" to be "queer", they, like you ARE queer! 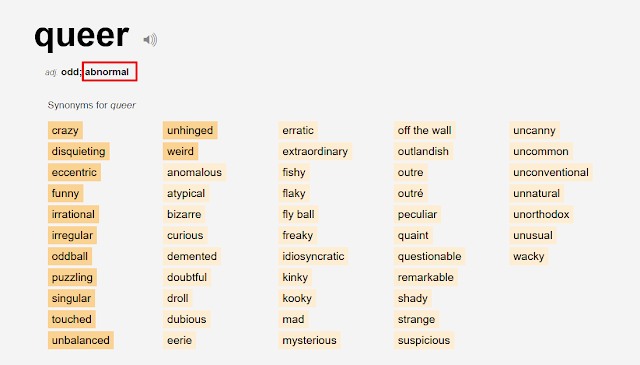 Queer. by the way, Jules, isnt something Lesbians took back, and now Heterosexual freaks have stolen as their own, it has ALWAYS been THEIR and YOUR own. NOT ours! Dykes were not, and are not, marching in the streets screaming with we're here we're queer signs. Lesbians do not need signs! Not in the past, not now, and not in the future! WE announce our Homo nature in our first words spoken, our first steps taken, LONG before our first kiss!
WE live being fully misunderstood and abhorred (including allies) by Heterosexuals of both sexes, having more in common with males of both sex types, and if we're lucky (as I am) marry another Lesbian; or better still (as it is for me) marry another Lesbian who is the Lesbian of our waking and sleeping dreams.

In other words, Bindel: you arent a fucking Lesbian and neither are the cunts you are crying about! At the end of the day Bindel's little whinge is nothing more than: 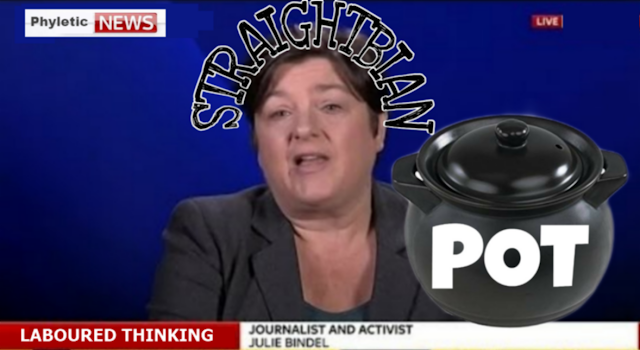 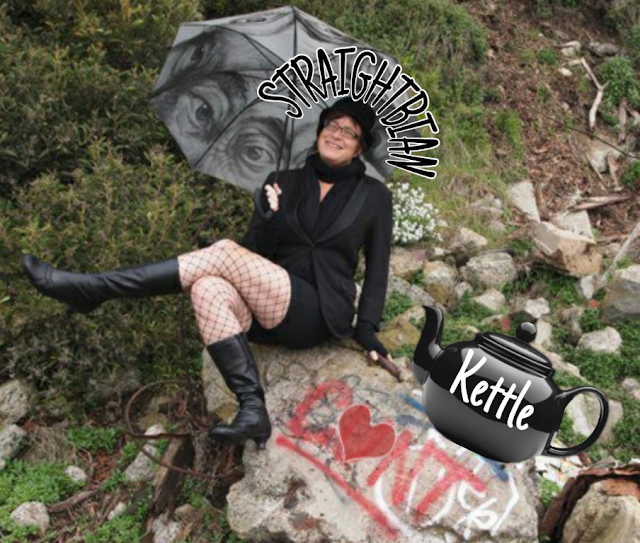 After a bit of a hiatus, we are back with the next sect of STRAIGHTBIANS in our UnSTRAIGHTening Lesbian series. In this series we will be unSTRAIGHTening: 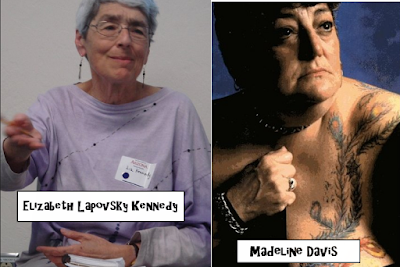 Both are noted for a joint lesbian herstory project called Boots of Leather, Slippers of Gold: A History of the Lesbian Community. Kennedy and Davis had the typical academic STRAIGHTBIAN paths; dated/married men, dump men in favour of Feminism, garner a degree/career to Hetsplain Lesbian to one and all, including actual Lesbians, all the while not knowing or caring about who actual Lesbians are or how vastly our experiences differ to that of Hets/STRAIGHTBIANS. From Slippers:

What Kennedy and Davis explored were STRAIGHTBIANS playing at THEIR heterosexual biology/notions of Lesbian based solely on Heterosexuality.

Next up will be Del Martin and Phyllis Lyon. 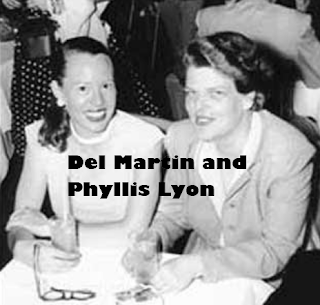 Martin and Lyon like most academic STRAIGHTBIANS, dated men, were academically inclined, chose to partner with each other, then spent their lives trying to Hetsplain Lesbian away from the mire other STRAIGHTBIANS defined it as. From their book Lesbian/Woman:

A few putrid drops in the bucket of their Homophobic Hetsplained book. Martin and Lyon struggled to remove Lesbian from its biological origins in order to explain their wrongful occupation!

Next in the group is Julia Penelope. 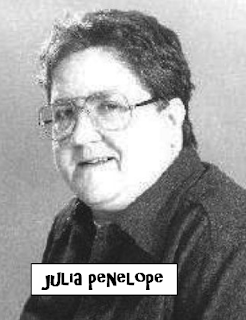 JP describes herself as "white, working-class, fat butch dyke who never passed", which loosely translates to a man-hating white Het woman who feels she is too fat to claim she is feminine. JP is a lesbian STRAIGHTBIAN academic separatist, who utilized academic gobbldeygook to justify why she claimed to be a Lesbian. A few choice quotes from JP: 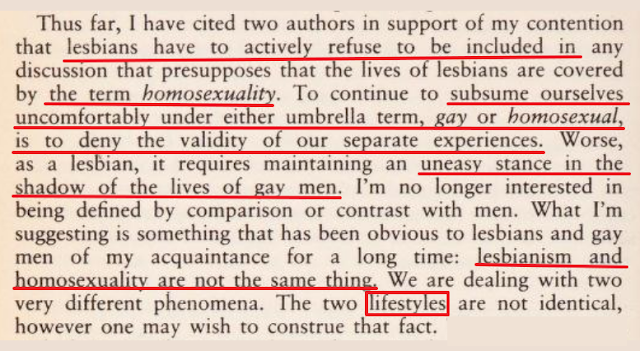 Like many STRAIGHTBIANS before her, JP was nauseated by actual homosexuals and set about linguistically distancing herself from us.

JP is right about one thing, biology DOES determine how sexually abused Het women occupy Het ideas of Lesbian.

And last in this new series is Audre Lorde. 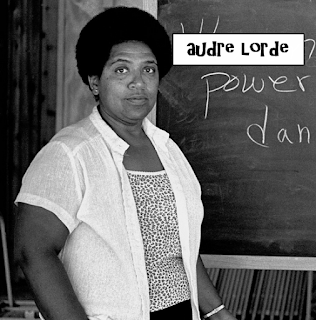 It is clear from the outset Lorde was no Lesbian, but in fact positively a STRAIGHTBIAN. Lorde enjoyed sex (both casual-resulting in illegal abortion-and serious) with men (she was married for nearly a decade) and other STRAIGHTBIANS.

Like many STRAIGHTBIANS, Lorde was hyper sexual and morally bankrupt regarding women.

With this next group Mrs Dirt and I will continue to brick by brick display the historical wall of STRAIGHTBIANS that continue to hide actual blood and bone Lesbians, in favour of Hetsplained flapdoodled Homophobic hogwash comprehensible to Heterosexuals!