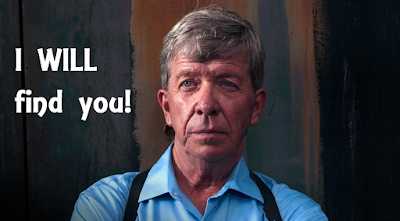 In the more than dozen plus years I have been actively writing about/criticizing/myth dispelling/accurate info providing about transgenderism/cross-sex hormone use/transgender surgical mutilations coupled HEAVILY with and now centered on Lesbian biology/Lesbian psychology/Lesbian childhood/Lesbian Teen-hood/Lesbian adulthood etc, MANY MANY MANY trite illogical/ignorant/moronic/over-emotional/lamebrained, and imbecilic insults have come my way. But surely the MOST birdbrained of all has to be that Mrs Dirt and myself are a trans couple/trans activists!

The mirth aspect of these particular rumours is not even that they have no merit whatsoever (clearly they dont), BUT that they make absolutely no biological transgender sense! But sense, linear thought, and biological reality are all (as our unSTRAIGHTening series has shown) foreign concepts to the STRAIGHTBIAN mind. For STRAIGHTBIANS, self-preservation trumps truth every time, and the work Mrs Dirt and I are doing threatens STRAIGHTBIANS living or dead (so it seems) to such an acute degree that even what we write on our own PERSONAL (albeit public) blogs is grounds for warning!

Despite a very glaring and blatant warning to read this blog at your our risk (or as the STRAIGHTBIAN case may be) at your own peril, STRAIGHTBIANS CANNOT STAY AWAY: 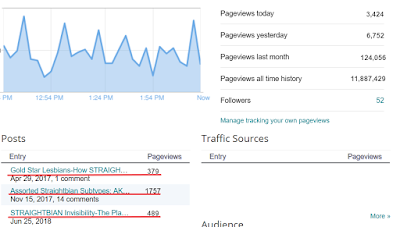 HER own peril as the case may be. Whether or not this is the STRAIGHTBIAN who started the trans rumours about Mrs Dirt and I, its clear this IS the STRAIGHTBIAN spreading them at THIS point in time. The first Twitter screencap is from a week ago and the second is from yesterday: 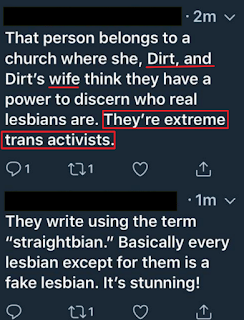 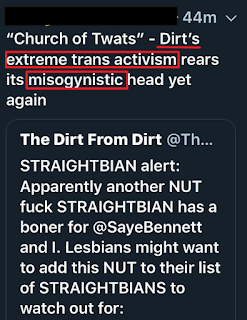 Now take a gander at this Facebook gem that fell into my lap (thanks to a Lesbian) this morning: 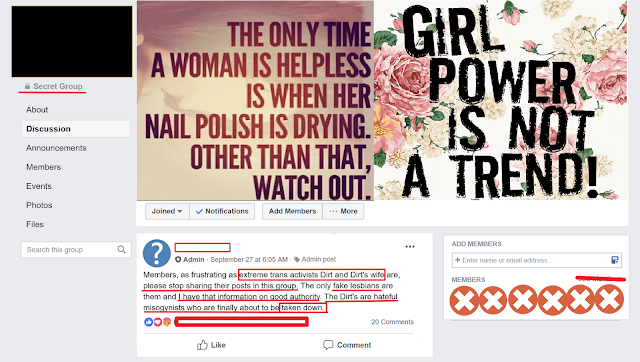 This makes it crystal clear there is a STRAIGHTBIAN driven (secret) group dedicated to slandering Mrs Dirt and myself, in a futile effort to silence Lesbian truths, Lesbian lives, Lesbian narratives, and Lesbian biology! And according to other FB posts that were shared with me, the admin of this group IS the STRAIGHTBIAN claiming Mrs Dirt and I are transgender!

Since this is still new info to Mrs Dirt and I and since we arent much familiar with STRAIGHTBIAN who is slandering us, we cannot tell you much more, as we ourselves are on a fact-finding mission as I write this. What I can tell you is that the Het woman/STRAIGHTBIAN driving the rumour mill bus is quickly headed for a dead-end street.

Unless STRAIGHTBIANS who have numbers and Het privilege on their side, Dykes have biology and biology trumps EVERYTHING!