While not the post intended next, due to the un-fucking-believable levels of Homophobia, this is my next post. 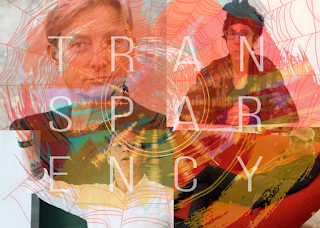 In relation to my last post regarding Judith Butler's warped love letter to NYU, crusading for the safe return of sexual harasser Avital Ronell, it seems Butler has gone all fickle toward Ronell (mostly because a rightful shitstorm blew her way, as well as Butler realising Ronell's personal emails/phone calls to Butler regarding the situation, were flat out lies)! That being the case, Butler has issued an apology letter, of sorts (she's praying for a get-out-of-jail-free-card-she does NOT deserve one!):


To the Editor:
I can only speak for myself since the signatories of the letter addressed to the NYU administration regarding the sexual harassment charges brought against Avital Ronell are not a group with a single view, and different authors helped to craft the draft version of the letter that appeared online without our consent (“Battle Over Alleged Harassment Escalates as Former Graduate Student Sues Professor and NYU,” The Chronicle, August 16). When the signatories learned that termination of employment for Ronell was under consideration by NYU, we were bewildered by the severity of this possible sanction. We understood she was accused ("We hold that the allegations against her do not constitute actual evidence, but rather support the view that malicious intention"...Butler took a sexual predictor's word over evidence that existed BUT which she did not possess) of conducting a “romantic friendship” and that her emails had been scrutinized for evidence of a sexual relationship.
Our aim was not to defend her actions — we did not have the case in hand — but to oppose the termination of her employment as a punishment. (Meaning, Butler and crew regardless of Ronell's academic iniquities didnt/dont believe Ronell should have been harshly punished-a simple writing on the blackboard I was a bad girl ten times would suffice.) Such a punishment seemed unfair given the findings as we understood them. In hindsight, those of us who sought to defend Ronell against termination surely ought to have been more fully informed of the situation if we were going to make an intervention. (Not so loosely translates to Ronell fucking LIED to me about her sexually harassing a Gay man for years!)

Moreover, the letter was written in haste (ya think?!) and the following are my current regrets about it. First, we ought not to have attributed motives to the complainant, even though some signatories (namely Judith Butler!) had strong views on this matter. The claims of sexual harassment have too often been dismissed by discrediting the complainant, (by people like Butler!) and that nefarious tactic has stopped legitimate claims from going forward and exacerbated the injustice. When and where such a claim proves to be illegitimate, it should be demonstrated on the basis of the evidence alone. (Really? No shit!)

Second, we should not have used language that implied that Ronell’s status and reputation earn her differential treatment of any kind. Status ought to have no bearing on the adjudication of sexual harassment. (Butler makes perfectly clear though, it DOES make a difference!) All faculty should be treated the same under Title IX protocols, that is, subject to the same rules and, where justified, sanctions.
Immediately after the confidential draft letter was published online, I was in direct communication with the MLA officers (the executive director, the president and the first vice president) to apologize (Ass kissing and boot licking, NOT because Butler had regrets BUT because Butler fucked up!) for the listing of my position within the organization after my name. I acknowledged that I should not have allowed the MLA affiliation to go forward with my name. I expressed regret to the MLA officers and staff, and my colleagues accepted my apology. I extend that same apology to MLA members.
We all make errors in life and in work. (The destruction of a person's career/livelihood before its even begun isnt a fucking simple "error", its a fucking homophobic travesty!) The task is to acknowledge them, as I hope I have, and to see what they can teach us as we move forward.
Judith Butler
Maxine Elliot Professor in the Department of Comparative Literature and the Program of Critical Theory
University of California at Berkeley

But Butler's ass kissing apology letter isnt solely what this post is about, this post is about the sheer clear homophobia that the Ronell/Reitman injustice is displaying by feminist academics across the globe. (All screencaps below were public at the time of my capping them) 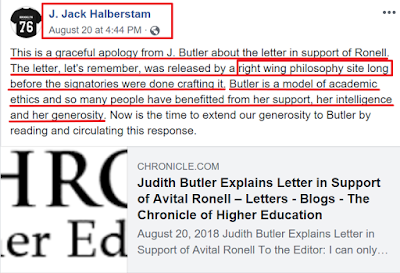 Judy, its been made perfectly clear Butler's ethics are subject to use ONLY when fearing the higher powers that be.

Perloff clarifies Judy's warped version of events and its crickets. Nobody fucks with MP! 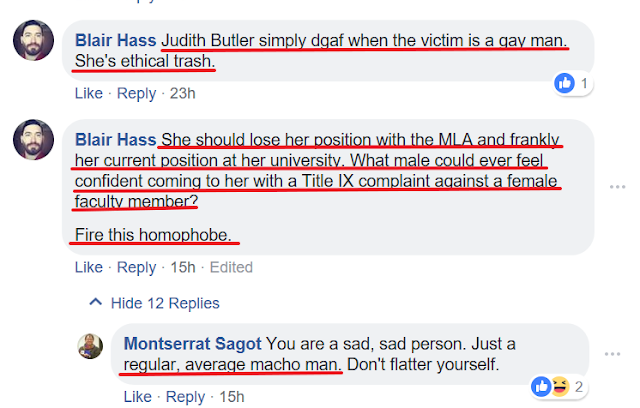 A rightfully angry GAY man makes some point blank statements and per usual whenever a Gay man or a Lesbian speak, Het women are there to call him (us) out for being...wait for it...wait for it....MACHO! Wow! That sure told him, as well as disproved his spot the fuck on points! NOT! 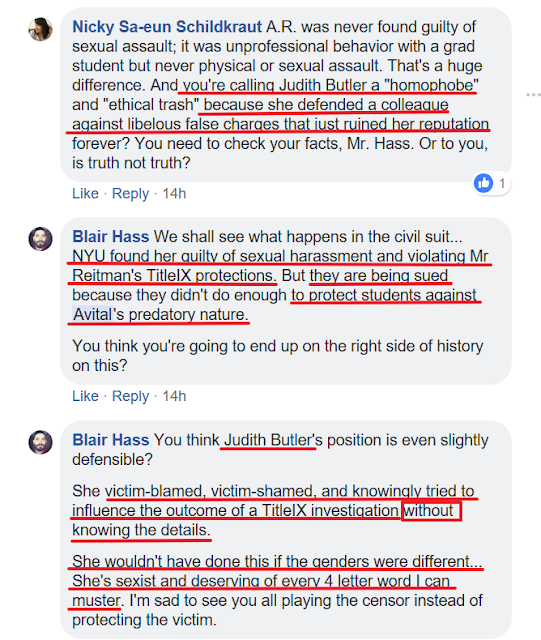 Mr Hass nails Judith Butler's motives and actions exactly; victim-blamed-victim-shamed-tried to influence a Title IX investigation!  After Mr Hass, and his rightful reaction to Homophobia is ignored (by feminists), and his correct summation of events attacked (by feminists) and the truth he states repeatedly are dismissed (by feminists), a by now VERY angry Mr Hass says regarding Butler's position "fire this homophobic anti-male cunt". Mr Hass edits out cunt (although personally I wouldnt have as its a more than adequate term under the circumstance (cunt meaning-Insulting term of address for people who are stupid, irritating or ridiculous). But of course where feminists of any sort are concerned, Mr Hass and his correct points are reduced to:

Calling Judith Butler an anti male cunt isnt the definition of misogyny, and where a college feminist professor fails to distinguish between her own personal (and I might add over emotional) feelings against facts, blatant homophobia and a Gay man's anger over ignored Homophobia by Het women, she should also be fired! 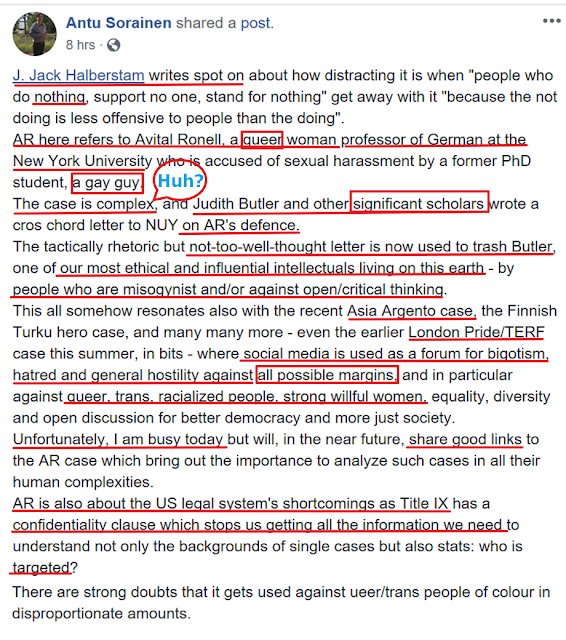 Antu is as Heterosexual and Homophobic as Judy Halberstam and equally incapable of using reason/facts over Het female emotionalism. Antu's hysterics pinball her from Halberstam/Ronell to that which has absolutely nothing to do with the case at hand (Avital Ronell was found GUILTY of sexual harassment!). Antu prefers to ignore the actual case, the actual information contained in the case and prefers to (when she isnt too busy) share good links, ie Homophobic feminist links that paint Homophobic sexual harassers as saints and Homosexuals as demons! Antu's ravings spawn from another Judy Halberstam maddened tirades: 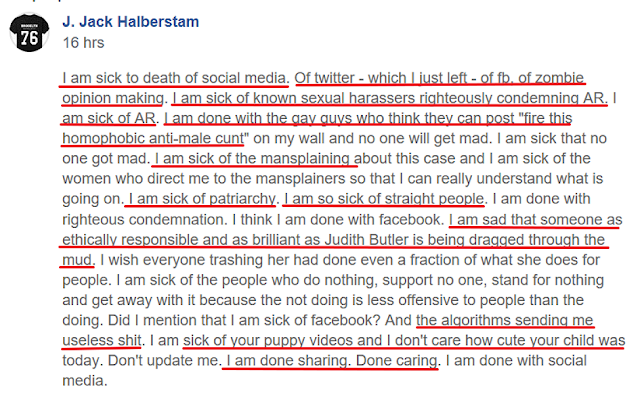 If Halberstam thinks Butler has ethics, I say again, Halbertsam has NO right to teach, period! Halbertsam's blind allegiance to her own Homophobia and that of Homophobic cunts (people who are stupid, irritating or ridiculous) is proof positive she and anyone who support Homophobia in any form have no business working with the public, at...fucking...all!

Avital Ronell's sexual harassment of a Gay man AND the reaction by other (mostly) female/feminist academics and the like, have made it perfectly clear just how far Homosexuals, Homosexual rights, Homosexuals right to equality and how accepting Heterosexuals are of (real biological) Homosexuals have come:
Dirt and Mrs Dirt