Next up in our unSTRAIGHTening Lesbian series is poet/theorist/Radical Feminist Adrienne Rich. 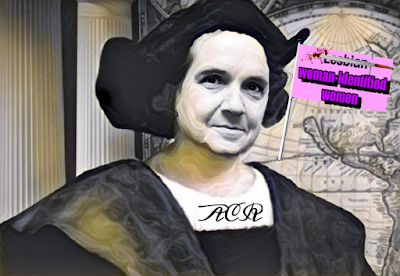 Adrienne Rich or ACR as Sylvia Plath referred to her, made her way to "lesbian" STRAIGHTBIANISM via the same route most Radical Feminists did/do; unexpressed voluminous anger for her own poor life choices she readily blamed the men in her life for (father/husband) and collective man (patriarchy). Rich said of her marriage:

"I married in part because I knew no better way to disconnect from my first family," she says. "I wanted what I saw as a full woman's life, whatever was possible."

Rich marries hoping to escape familial confines/duties only to find herself unhappily in the same trapped place, only worse; with children.


"I wanted, then, more than anything, the one thing of which there was never enough: time to think, time to write."

Rich's dishonestly in the marriage lead to both her and her husband having affairs:

Apparently she was such a hotty ALL the men in NY wanted a piece of her pie! Umm sure, okay!

After cheating on her husband with both men and women, once her hubby was out of the way/dead, Rich embarked through Radical Feminism, on a mission to remove Lesbian from those gross, vile,  dykey/mannish/wannabe men/act like men/think like men Lezzies SHE perceived actual Lesbians to be/look like and give Lesbian an air of upper middle class academic redressing, making Lesbian more appealing/palatable and acceptable to greater Feminist groups/women.

Like Radical Feminists in Rich's day and RadFems now, Rich desperately needed the IDEA of Lesbian to both vent her anger and (mistakenly) use as a means to remove herself from (in her mind) Heterosexuality/Heterocentric confines rendering her helpless/afraid/weak and ineffectual. As a Heterosexual woman, Rich could only access Lesbian through lying:

I will show shortly in Rich's piece de resistance that Rich (unlike some STRAIGHTBIANS), selfishly planned and executed her lies.

It is precisely codswallop like this that fully seals ANY question (were you to have any) of Rich's Heterosexuality. Radical Feminists like Rich tell themselves collective man enforces Heterosexual female grooming/dress etc (when actually it is Heterosexual females who both desire/enforce beauty standards) yet cannot explain why Lesbians en masse do not fall prey to the same Heterocentric grooming standards.

Lesbians have always existed and have never required validation for our existence. Women, particularly damaged Radical Feminists like Rich spend their lives/careers seeking some sort of warped validation and blame men for not GIVING it to them!

Rich often talks out of both sides of her mouth; on one side she claims her "erotic" feelings for women have been stifled via Patriarchy and on the other side she claims sexual feelings between women are not necessary for qualifying them as Lesbian! Rich ignores or doesnt bother to notice most Lesbians do not have the luxury of a closet, most Dykes are visibly Lesbian. Lesbian visibility shines for some Lesbians physically and mentally and other Lesbians less physically and more mentally. Either way, Dyke thought processes alone peg us for Lesbian, as any Lesbian can attest to since the advent of the internet. Even online with a genderless name and no image of ourselves, we are often assumed/believed by Hets (usually Het women) to be men! 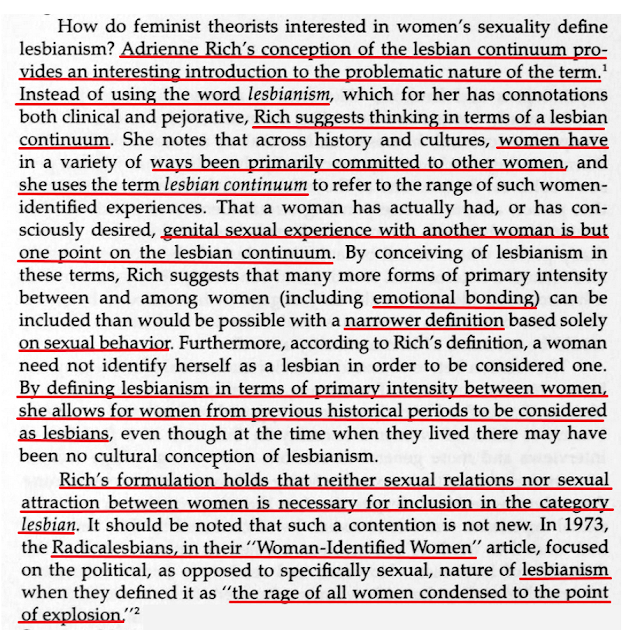 Lesbian was problematic for Rich precisely because of the ugly depraved dykey sexually perverted masculinist ideas held by Hetero society/Heterosexuals like Adrienne Rich herself. But Adrienne Rich desperately needed Lesbian because it encompassed (to her) anti maleness, what she didnt need was the alienating baggage attached to Lesbian. So Rich tried to simultaneously redefine Lesbian for Heterosexual Feminist inclusion while distancing the debauchery attached to Lesbian, thus Compulsory Heterosexuality and Lesbian Existence was born.

This quote not only sets the stage for the rest of Rich's essay, it IS the stage Rich starred for the rest of her life! A Heterosexual privileged life whereby Rich and Radical Feminists like her, chanted to themselves and in Radical Feminist groups like an incantation; I'm a lesbian! And dont think for a minute Lesbians missed the degrading walls Doris Lessing sandwiched Lesbian in this passage! This was Rich's fear, without a man, her only choices were bitterness, spinsterhood or Lesbian. Rich CHOSE lesbian, not actual Lesbianism, but a Hetsplained version she could somewhat live with. Like Lessing's Anna, Rich was too weak to forge a relationship with a man where SHE was willing to or capable of, living her new found consciousness.  Moving on: 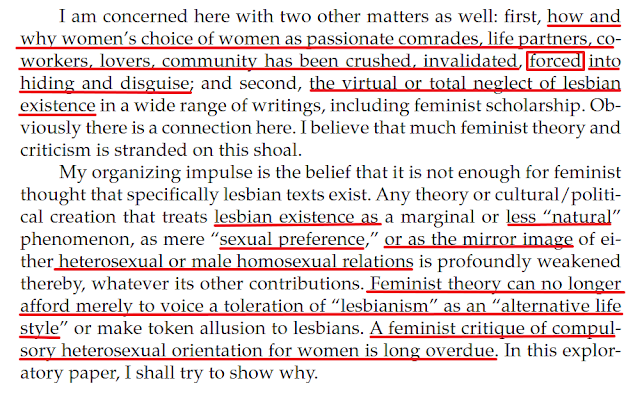 Rich believed that Lesbian scholarship was forced into hiding by a patriarchal driven Compulsory Heterosexuality that even mid range Feminism enforced. Rich failed to understand that Lesbian erudition wasnt (isnt) quashed or silenced by patriarchy, it wasnt (isnt) understood by Heterosexuals, particularly Het women! Rich feared losing academic clout by choosing Lesbian as her modus vivendi and through RadFem speak tried to make HER brand of lesbian acceptable to greater Feminism. 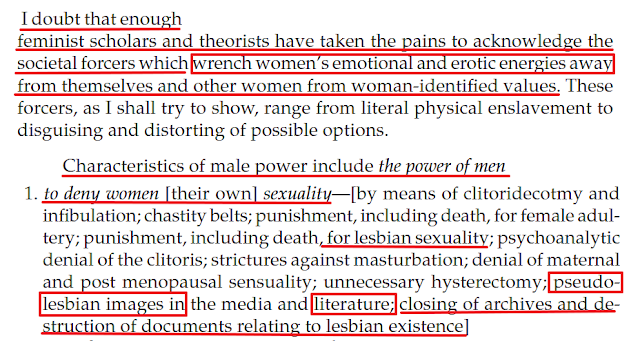 Rich assumes Homophobia alone inhabited Feminists (Het women) from trying to coral Het women toward a political lesbianism via feminist theory and why lesbian art/literature etc remained rare. Rich failed to see how her own warped man hating RadFem agenda was responsible for biological Lesbian invisibility in the arts and elsewhere than was/is Homophobia, because she blinded herself of our existence.

Further in the essay Rich says:

Rich brings up Lesbians being closeted in the workplace but the exact experiences she uses to make her points are the experiences Heterosexual women (like her), claiming to be Lesbians (like her) had with the luxury of being closeted! Most Dykes NEVER have that luxury and most Dykes even if they did would NOT put some fucking job over their entire lives! The only Homophobe here is Adrienne Rich!

Because Rich herself (a Heterosexual woman) didnt feel or experience blatant Homophobia (why would she?) she ignorantly theorised compulsory heterosexuality was to blame for Feminist silence about Lesbians/Lesbian issues, including the reason Feminists wouldnt platform Lesbianism as a possible choice against patriarchy/men! Rich claims non Radical Feminists were in collusion WITH patriarchy! Non Radical Feminists, according to Rich, helped provide patriarchy with pussy, pay and passion! 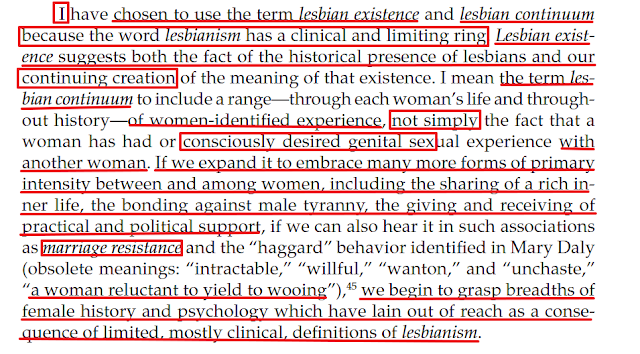 Rich found the term Lesbian limiting because Lesbian didnt include STRAIGHT women like her and because Rich didnt like the psycho-logical definitions defining Lesbian or the societal connotations colouring Lesbian by Het society. By expanding Lesbian to include all female relationship types, not simply "genital" as Rich crudely puts it, Lesbian wouldnt be so foul an idea, for women or society. Rich fails to acknowledge the LIMITS, limits based on HER HETEROSEXUALLY driven assumptions about biological Lesbians, that real Lesbianism isnt defined by pussy licking or KFC pussy (finger licking good). Lesbian was crude, vulgar, plebian not because it was/is, BUT because it was based on Adrienne Rich's own sick fucked up homophobic warped fucking views of Lesbian! 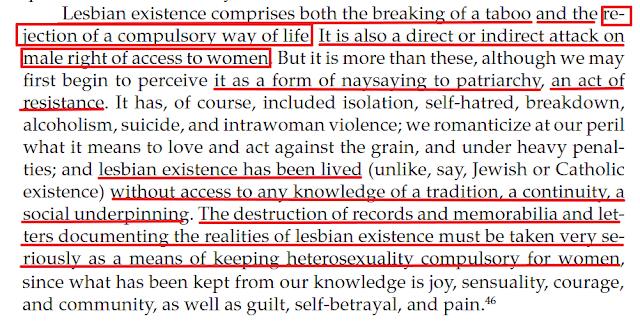 Being a Lesbian has fuck all to do with taboos or rejecting Heterosexuality, it has ONLY to do with being born physiologically Lesbian! Lesbians arent saying no to patriarchy, patriarchy doesnt factor (collectively) anywhere into a Lesbian's life. Lesbian past, present and future grew/grow/will grow up without any/little knowledge of Lesbians; fortunately abilities innate to our survival ensure we find each other and are capable of survival even if we dont. The ONLY destroyers of Lesbian, records or histories are Radical Feminists like Adrienne Rich! What has been recorded  as "lesbian" experiences/narratives etc, are instead the experiences/narratives etc of STRAIGHTBIANS like ACR!

In other words, Adrienne Rich and Radical Feminism itself are NOT LESBIAN! Bizarrely in this strange (sick) passage Rich twice brings up/equates a child/mother being turned on during infant feeding. I refuse to think past Rich's statement here because to do so is just toooooo fucking SICK and it most certainly is NOT Lesbian!

Adrienee Rich said of women's diminutiveness art/history in When We Dead Awaken: 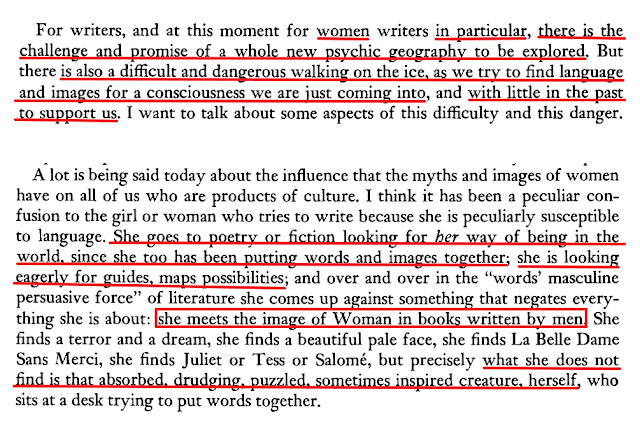 Precisely because of STRAIGHTBIANS like Adrienne Rich, Lesbians/Lesbian youth flounder and flail trying to find ourselves in the world. Thanks to the likes of Rich and her warped RadFem ilk, most of the signs and symbols labeled Lesbian are false. They point us right back to female Heterosexual mindset and body that paints us into a corner of dysphoria, reinforcing Lesbian confusion and resulting in a lesbian community made up of Heterosexual women where Lesbians STILL do not exist.

Adrienne Rich discovered Lesbian in the same way Christopher Columbus discovered America, she ignored those already living here and those she couldnt ignore she kindly smothered in blankets of smallpox.