Sex and the STRAIGHTBIAN (Part 2) The Passion is Perversion

The flip side of the frigid/anti-sex/passion is political/eschewing sex and femininity STRAIGHTBIANS are the STRAIGHTBIANS who embrace sex with both arms and every orifice, LOVE sex sex sex, try anything once or twice sex Het women. In years past these STRAIGHTBIANS were on the opposite side of Radical Feminism; their feminist liberation was to be found, not in squatting over a mirror looking at their vaginas, BUT in using their vaginas to find power! They convinced themselves that through sadomasochism, where they could explore/control sexual proclivities (some of which were) derived from child sexual abuse, they could find the power robbed of them as girls/women.

Depending on if sexual abuse was suffered as a child, how long it occurred, how it was dealt with or ignored and natural temperament, determined each STRAIGHTBIAN'S role in BDSM. For some STRAIGHTBIANS that role may be as the submissive (many will co-opt (High/Femme/Bottom/Baby/Girl to imply that) for others that role will be as the dominant (many will co-opt Top/Butch/Daddy to imply that), and still others will play at a Daddy/boi/boy sex-play. A number of STRAIGHTBIANS who gravitate toward the dominant roles have/will also transition. This STRAIGHTBIAN type's pathology on cross sex hormones will often increase their warped sexual appetites as well as their sadism during sex scenes. This STRAIGHTBIAN type, despite the sheer fear and powerlessness they felt as sexually abused girls, first identify with and later become (through transition/hormones) the all powerful abuser of their (mostly) willing equally disturbed partners.  Some of these dominant STRAIGHTBIANS will even lobby for less strict laws around child/adult sexual relations aka Pedophilia. Aside, many dominant STRAIGHTBIANS will have had at some point/s identified as gay men, most will have been/are FagHags, including having sex with Gay men.

Some of the more mentally damaged STRAIGHTBIANS in this group will even act out (repeatedly) sexual abuses done to them as a child; one partner will role-play being a baby girl while the other partner pretends to be the Daddy who then sexually abuses his/her baby girl. Both parties derive their own warped feelings of power during these bizarre scenes. Power, by being the person holding the safe word which can stop everything on utterance, and the other feeling power/full by taking power over the other and having the power to bring the other to sexual heights/climax/es; exchanges that both parties tightly wrap in a yarn of believed ultimate/superior intimacy and trust. But the intimacy/trust are nothing more than a mutually shared delusion that can quickly unravel at the slightest fray.

As neither party is actually Lesbian, these particular STRAIGHTBIANS fetishize "lesbian sex" (sex between females) through their own Heterosexuality/Het norms.

Many STRAIGHTBIANS in this group for varying reasons are hypersexual, and sex will figure some way in nearly all aspects of their life. They will join or forge self created careers in some aspect of the sex industry. They may be sex educators/experts, strippers, prostitutes, sex facilitators/consultants, burlesque performers; they may make lesbian porn videos/photo shoots etc. Most of these STRAIGHTBIAN types will have a sexual pathology, but even those where this is absent, because none are Lesbians, ALL have a pathological need/drive to sexualize themselves with a female partner/s. Lesbian to ALL STRAIGHTBIANS must involve another female, but particularly for this type.

Without sex or even the idea of sex between two females, these STRAIGHTBIANS disappear. Therefore, fetishizing lesbian is not only a product of their pathology, its at the root of their self. Like Transgender self-hood, these STRAIGHTBIANS rely on constant external validation/reinforcement, even if that is nothing more than personal photos of themselves/their female partner kissing/touching/sexing etc. Many will exhibit public displays of affection bordering on the sexual, they dont simply want the public to look, they NEED the public to look. They NEED lesbian approval even from strangers, be that at a restaurant while having dinner or on Social Media.

Unlike actual Lesbians (who do not require external validation to tell us who we are), lesbian approval for this STRAIGHTBIAN type isnt approval for being a Lesbian. These STRAIGHTBIANS require approval for behaviour they FEEL to be Lesbian (via their Heterosexuality), feelings they need to strengthen their foothold of THEIR thin grip on Lesbian IDENTITY. This tenuous grip being so fragile, even if they have 1 naysayer among a 1000, they may mentally/emotionally implode! Even demanding validation and/or vilifying naysayers through conferences/sex wars/Social Media battles/books/articles published/tickets sold etc that they ARE Lesbian! As an aside, many of these types will have romantic/sexual photos of themselves around their home with a former/current partner; a daily reminder that these girl on girl visuals MAKE them lesbian.

Past Straightbians in this group fancied themselves on being sexual outlaws/sexual renegades, turning sexual mores on their heads; queering lesbian  through stealing Gay male cultural norms/tropes to wet their warped sexual perversions in one hand and lining their pockets through theorizing lesbian as the ultimate subversive act in the other. This Past STRAIGHTBIAN group believed/preached that through the bondage of ropes and chains (het) women could FREE themselves from the shackles of Patriarchy.

Today's version of this STRAIGHTBIAN type merely mimics the straight male's wet dreams lining the shelves of porn hubs everywhere. This STRAIGHTBIAN version preens, prances, pouts and performs lesbian per Patriarchy's fantasies; their lips never speak of Liberation, only licking pussy. This group doesnt even have the mental wherewithal to look beyond what they see everyday: HeteroSEXuality. Somewhere between IQ and the internet, today's STRAIGHTBIANS lazily believe that by performing Het male lesbian cliches for global attention/identity reinforcements that they are subverting social norms! These STRAIGHTBIANS spend less time trying to smash the Patriarchy and more time bending over for it! They tell themselves their sexual displays are personal, but their copious look at us, look at us, look at us cinches their Het female narcissism that is ALWAYS looking for a looker.

But both types, past and present, can only occupy lesbian through male tropes (gay or straight). Meaning even the ways in which they suspend their Heterosexuality, IS Heterosexual!

A look at STRAIGHTBIANS in this group from the past: 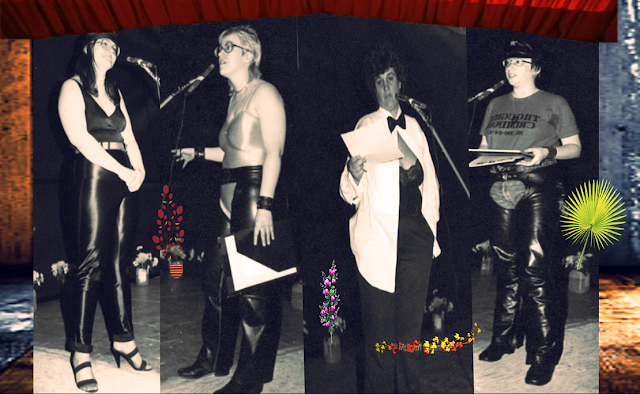 A look at STRAIGHTBIANS in this group today:

While this goes without saying, obviously consenting adults (Lesbians) can engage in bed (any) room games that might make some of us blush without their fun being pathologised, by us or anyone. We arent criticizing what anyone does in bed, we are saying that STRAIGHTBIANS have a specific pathology that is discernible to anyone paying attention.