The next Het Woman we are emphatically unSTRAIGHTening from Lesbian is the very damaged/demented Valerie Solanas, known as much for shooting pop icon Andy Warhol as for her erratic radical scribblings and all around hatred of men that culminated in her SCUM Manifesto. 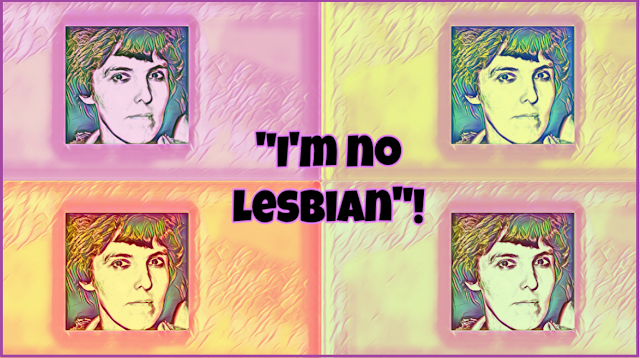 Some general information about her early life as is known/documented:

Valerie was described from an early age as very bright, but very troubled. Valerie was rebellious early on, a frequent shoplifter, school skipper and whom was filled with a level of anger she had difficulty controlling, and of which got her into trouble often at school.

Highly angry and highly sexual Valerie was sent to a Catholic boarding school (Home for UnWed Mothers?) around age 14 in 1950 where she claims to have had her first sexual experiences with other girls. She was also pregnant and in 1951 gave birth to a baby girl (Linda, raised by Valerie's mother as Valerie's sister). The child's father according to Valerie was none other than Valerie's biological father, whom Valerie claimed (along with her step father) to have molested her since about age 6. Claims corroborated by Valerie's sister later on.

A short time later Valerie dropped out of boarding school, dated a married man whom she became pregnant by, giving birth to a son David in 1953. In exchange for college tuition, Valerie allowed David's paternal grandparents to raise the child, whom Valerie stayed in contact with till the child was age 4.

Valerie attended Uni of Maryland where she did okay academically, but still struggled socially/financially. Valerie regularly depended on a small circle of friends for hand outs but felt slighted/angered if friends could not afford these handouts, once even urinating in a friends orange juice bottle when the friend couldn't give her any money. Valerie remained angry/violent at Uni and was force by Uni officials to get counseling. Her brightness helped to keep her from being expelled, but her anger got her repeatedly into trouble. While at college Valerie self IDed as a bisexual. At this time Valerie both waitressed and prostituted herself when she needed money. Something Valerie would return to whenever in dire straits. Valerie graduated in 1958 with a degree in Psychology. 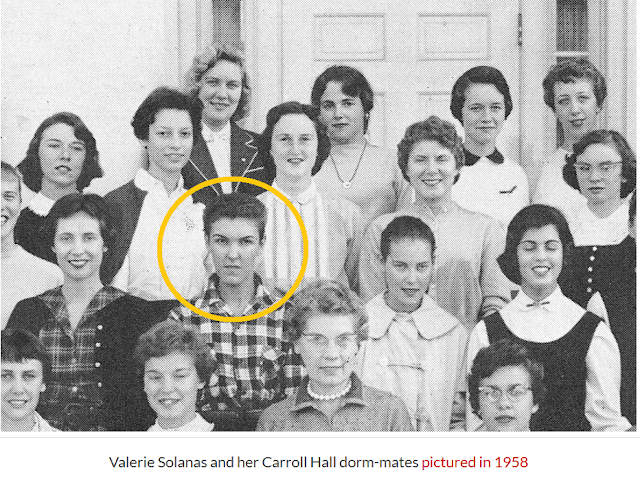 After college Valerie drifted/hitchhiked from one end of the country and back to the east coast, living with various boyfriends at that time. In the early 60's Valerie discovered Greenwich Village in NY and it was there she decided she wanted to become a playwright. The first (only) play (Up your Ass) Valerie completed, was written during the mid 60's along with an article for the Men's magazine Cavalier entitled: A Young Girl's Primer on How to Attain the Leisure Class, about how to prostitute yourself through college. 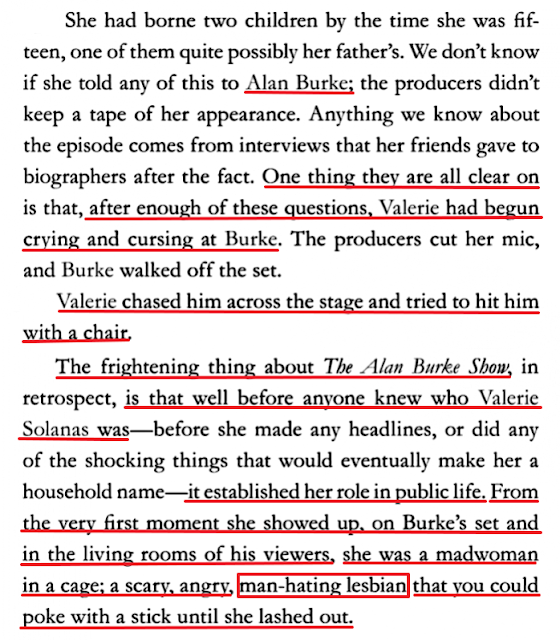 The scene from the 1996 film I shot Andy Warhol accurately accounts what happened on Burke's show:

A few years later and while still struggling to get her play produced, Valerie met pop artist Andy Warhol and begged him to read/produce her play. Warhol told Valerie he would read her play and get back to her. After reading the play, despite Warhol's reputation for producing the avant garde, Valerie's play was so pornographic Warhol wouldn't touch it with a ten foot pole for fear the play was a police set up. A short time later Valerie contacted Warhol about the play, Warhol told her he wasn't interested in producing it and when Valerie asked for the copy back which she had left Warhol, he claimed to have lost/misplaced it. Valerie began hounding Warhol for her play, so Warhol offered to pay her for being in a few of his short films.

Despite trying to give Valerie paid work in exchange for losing her script, Valerie's obsession with Warhol grew, grew and was fueled by her deep hatred of men, blaming men/Warhol for her mucked up life. Valerie didnt have a safe/comfortable home, she had little money, money made usually from prostitution, and she couldn't become famous because no one (no man) would produce her play. It was at this time Valerie figured out if she wanted to get her play produced, she needed to be famous first: 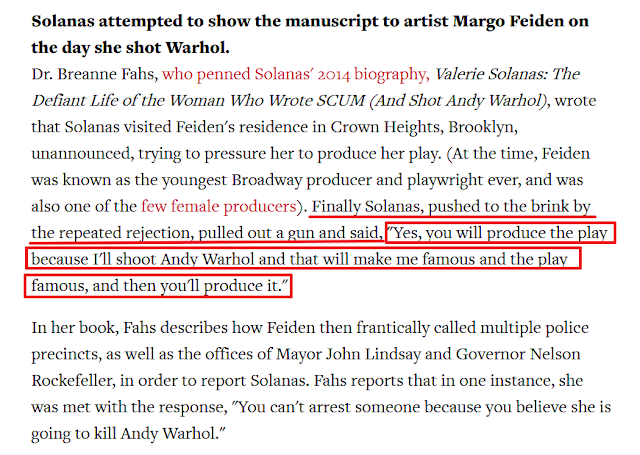 In June of 1968 Valerie shot Andy Warhol, nearly killing him, wounding another man and only stopped short of shooting another man in the head point blank because her gun jammed. 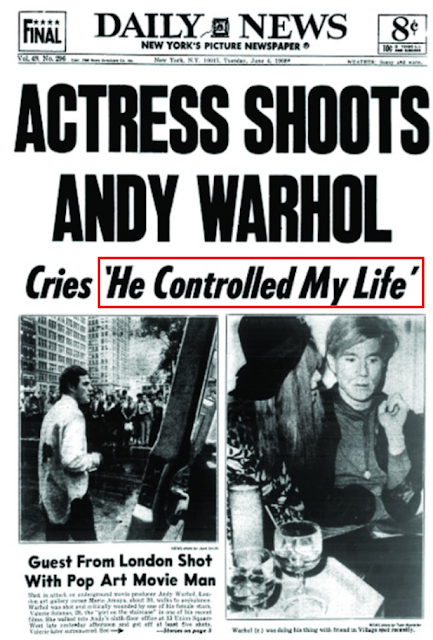 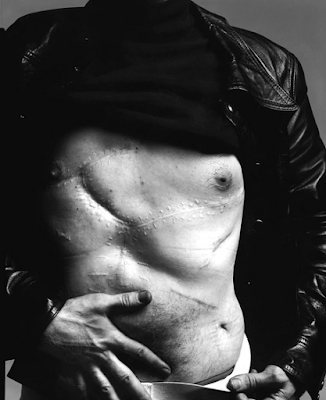 Highly sexual, highly paranoid, highly disordered and now highly violent! Valerie turned herself in a short time after attempting to murder multiple men. At her arraignment Valerie said she didnt regret what she did and she didnt want a lawyer, preferring instead to represent herself. The judge ordered her to be taken to Bellevue Hospital for psychiatric evaluation/observation. When back in court Valerie was indicted on charges of attempted murder, assault, and illegal possession of a gun, she was declared incompetent and sent back to Bellevue. 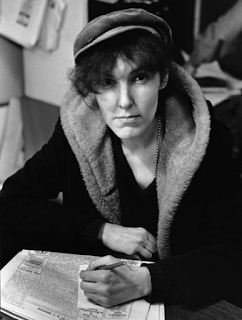 An aside, believe it or not some RadFems declared Valerie to be "butch" in this picture! (I kid you not!)

Around Valerie's time in Bellevue, Radical Feminist and member of NOW lawyer Florynce “Flo” Kennedy along with Radical Feminist and member of NOW Ti-Grace Atkinson contacted Valerie about mounting a defense for her. Ti-Grace Atkinson believed (besides Lesbian being a smart choice for Het Women), that Valerie's shooting Warhol was the culmination of the Feminism Movement! Betty Friedan however didnt agree:

Valerie and Atkinson exchanged a handful of letters about Valerie's situation and Atkinson's desire to USE Valerie for NOW's personal platform: 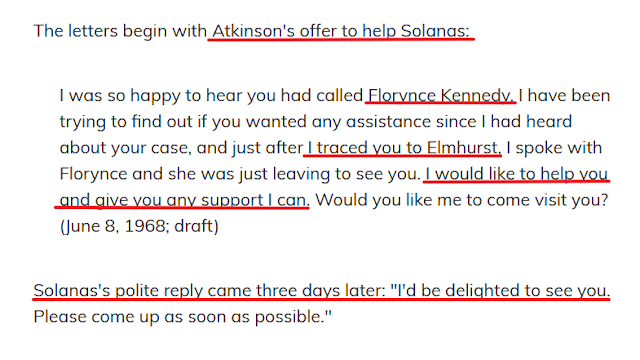 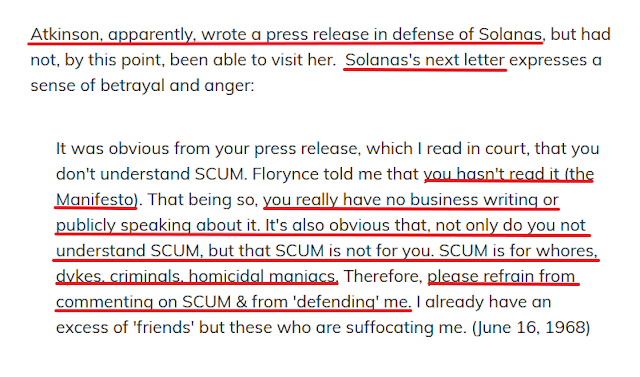 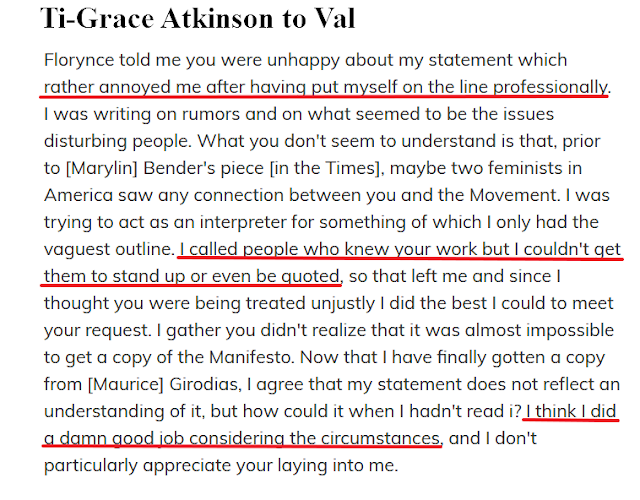 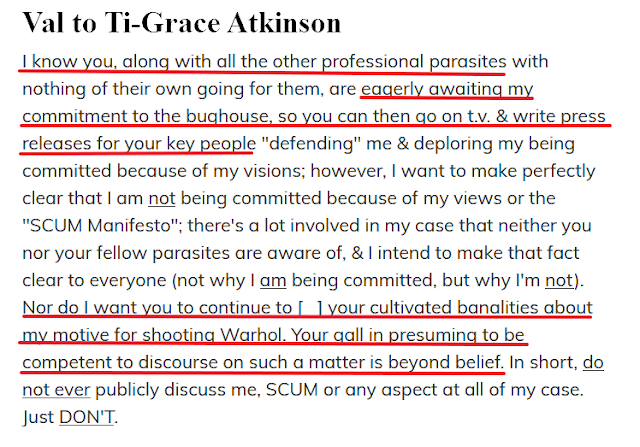 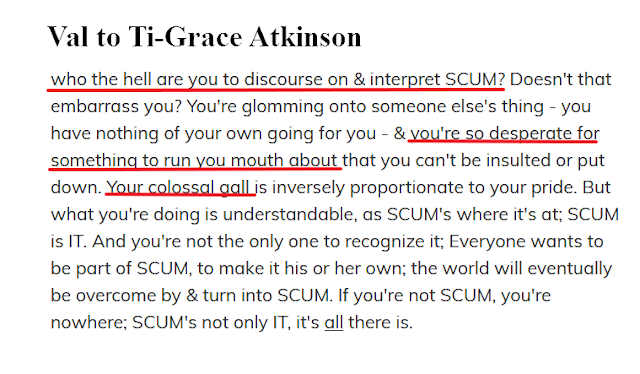 As was usual for Valerie, she readily and viciously bit the hand that fed her; her anger at Ti-Grace Atkinson remained with Valerie years later: 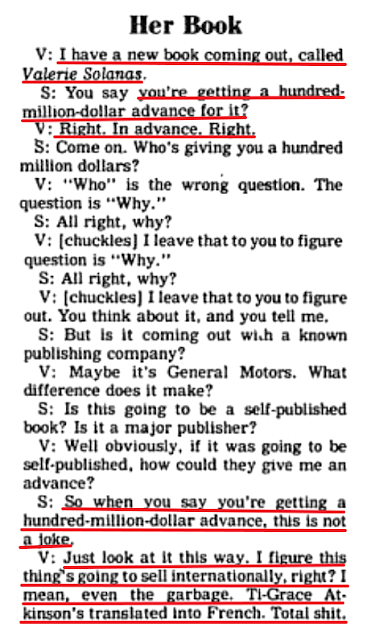 Valerie served about three years confinement and was released, the short sentence believed because Warhol chose not to attend Valerie's parole hearing.

After Valerie's release she spent the remainder of her life drifting around the country, in and out of mental facilities and living in run down quarters. She was found dead at age 52 in a hotel in San Francisco by the superintendent.

Valerie Solanas was a HIGHLY disturbed/mentally ill HETEROSEXUAL female, likely sexually abused from an early age, likely informing her hyper sexuality that led to occasional sex with other disturbed Het females (The girls are okay. They’re willing to help any way they can. Some of them are interested in nothing but sex though. Sex with me, I mean. I can’t be bothered …. I’m no lesbian.) as well as leading to prostitution. Valerie's SCUM Manifesto was filled with a combination of sexual obsession and hatred of men (daddy).

And it was precisely THAT combo (sex/man hatred) that led (and still leads) Radical Feminists to hold Valerie's rotted corpse/corpus up in effigy. Radical Feminists conclude Valerie was a Lesbian, for two reasons 1) Valerie had sexual experiences with other females and 2) Valerie hated men, neither reason having anything to do with being Lesbian.

Like ALL female hero's of Radical Feminism, Valerie Solanas was heterosexual and a victim. Like most Het females, Valerie could never accomplish anything without male assistance, even shooting Warhol was a subservient gesture to find fame through someone else (a man). Valerie Solanas was no more a Lesbian than she was/is a Hero. And while we can find some sympathy for her tragic life, we cannot maintain the Radical Feminist LIE that Valerie was a Dyke.