What does Radical Feminism Want from Transgenders?

This post is a follow up post to Radical Feminists-Transgender Activists and Speakers Corner-a Reflection of RadFem Impotency. The reason for this post is to address a red herring that has been circulated by RadFems/RadFem supporters. The red herring came AFTER accurate accounts/rightful criticism of the Speakers Corner drama was vomited all over social media. You can read my previous post for a full account of the wasteful drama.

The red herring that I'm speaking of can be seen here in this video.

The above video is being used as a look-here-not-there ploy/redirect to stir up Radical Feminists and other Women. By focusing on this young man's anger, we can forget all about the woman's actions that lead to his getting angry in the first place!

But even if we allow ourselves to fall for swamp land being sold; males are/commit violence (nothing new or shocking there), with relations to transgender transition, what exactly are Radical Feminists and RadFem supporters saying with this example?
As Radical Feminists/RadFem supporters are so adamant about biology having little to do with human behaviour (non-essentialism), are they upset that biological males (trans males) under the guise of woman have made more legal leaps and bounds within a handful of years than Het Women have made in 5,000 years?

Are Radical Feminists/RadFem supporters upset that the majority of transgender action oriented criticism is being directed and lead by biological males (trans males)?

Okay, before letting the point get away from me, once again going back to the menacing looking transgender male/trans supporter, by calling him out for looking angry or even attributing angry/violence to males (trans or not), what has been accomplished by Radical Feminists/RadFem supporters stating the obvious? Nothing. A waste of time and energy for the sole purpose of garnering attention by a handful of attention whores who arent invested in the mental health/health of those who have transitioned or are seeking it. 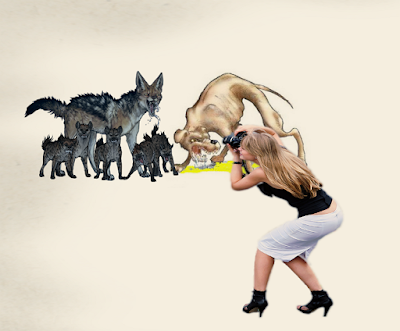 A few days ago an incident (between Transgender activists/supporters and Radical Feminists/supporters) occurred at Speakers Corner where a discussion/debate was to be held regarding the Gender Recognition Act of 2004 called: 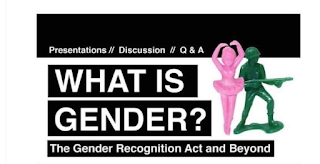 At this point, due to said incident, anything and everything else discussed at this function has been made incidental by both sides.

As someone who clearly doesnt favour either side, because lets face it, Transgenderism and Radical Feminism are opposite sides of the same coin, for those interested in an objective view, read on.

If you are not familiar with what happened, the main social media headlines read something like 4 trans activists attack 60 year old woman at Speakers Corner. But what REALLY happened? There are numerous pictures and videos of the attack, some more clear than others. Having at this point I think, seen everything out there, its obvious from the first videos to the latest what happened.

There were groups of people milling around, mostly on one side (Transgender) or the other side (Radical Feminist) with the odd flake flitting to and fro. Both camps were chanting various things, but clearly what Trans Activists/supporters were chanting irked this particular RadFem-(Maria M)  compelling her to walk over to the Trans Camp and record/take direct pictures of them without their consent. Maria you can clearly see on the right taking pics:

Trans Activists/supporters try to place their poster in front of Maria M to no avail, because Maria shoves her camera past and into the Trans crowd:

Personally, if someone shoved an unwanted camera in my face, they better be prepared to get their camera smashed to pieces. Moving on...one Trans Activists/supporters goes after Maria's camera as she smugly walks away:

A scrap ensues between Maria and a Trans Activist/supporter: 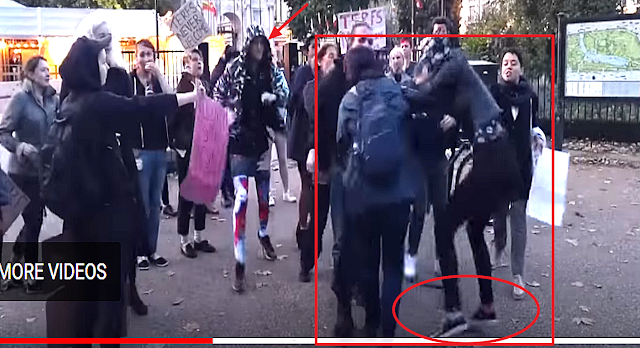 Maria yanks the Trans Activist/supporter off the ground and then chokes the shit out of them: 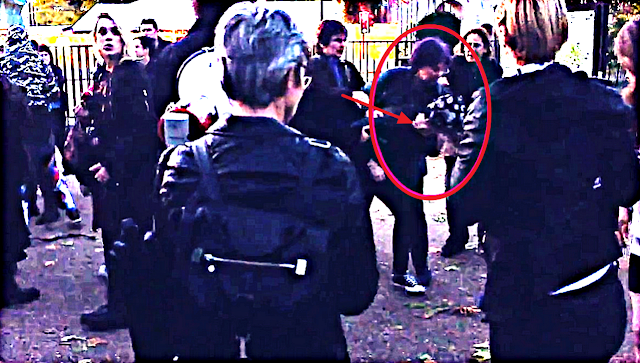 Then Maria shakes the shit of of the Trans Activist/supporter: 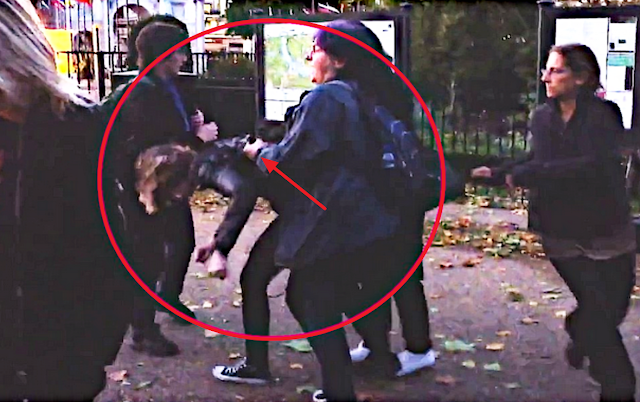 During this fight/scuffle over Maria's camera, at varying times another Trans person flitting around, at first trying to stop Maria's picture taking, then full out smacking/punching at Maria in effort to get Maria to release their friend: 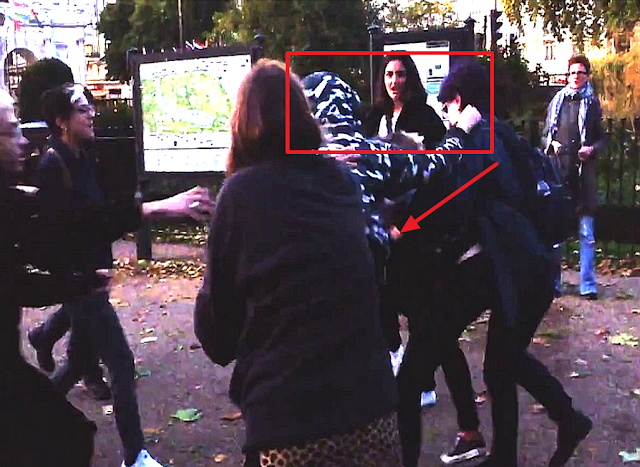 Maria loosens her grip, the camera gets tossed to the ground and the two camps disperse. The Twitter attention Maria M went after with her camera erupts in attention over her "attack" by Trans Activists/supporters. Basically, it is what we have seen occur between Transgender and Radical Feminists for the last forty years and what takes place on social media hundreds of times a day. Radfem (girl) baits/hits/goes after Transgender (boy) and Transgender (boy) chases RadFem (girl) then RadFem (girl) runs screaming for help. The story is as old as the Heterosexual hills, that some of these boys claim to be girls, changes nothing-biology will out.

Maria didnt asked to be physically hit, but she most certainly DID trespass personal (physical) boundaries of those already deemed emotionally unstable. If you kick at a rapid dog, there is a good chance you are going to get bit. That doesnt make you a victim, nor does it mean you are asking for it, but it does make you look stupid. Maria and her new found (temporary) mostly Het female fan base however desire her victimhood status. Maria flat out started the incident and predominantly had and maintained control throughout, despite a few swipes and a broken camera.

We have all growing up been in scraps with someone where there is no clear winner and winning a scrap is based on who got the best of who. Clearly Maria got the best of one particular Trans Activist/supporter and fared best throughout the whole incident, yet all we hear from her and her camp is Maria as VICTIM VICTIM VICTIM. Why does Maria and other Radical Feminists so desire her/the status of victim? Is this suppose to suddenly make the Psychiatric community go "hey Trans males are violent and violent against Women, even older Women, we should stop transitioning them, stop letting them use Womens facilities etc?"! Obviously that makes no logical sense, nor is it going to happen and the whole of why anyone was there at Speakers Corner is forgot, eclipsed by needless drama.

Males and Trans Males have and are changing real laws that allow and promote the proliferation of Transgender (self/parental) diagnosis in children as early as months old, while Radical Feminists play Girl/Boy games for attention. Since Homosexuality remains the foundation for public and private Transgender notions, Homosexual adults have been grist for Trans mills and Homosexual children are daily becoming grist. And except for a few of us, this knowledge doesnt warrant a even whisper from Radical Feminist lips let alone a well deserved scream. Not unless that is, dramafied attention seeking RadFems can milk it for personal gain. 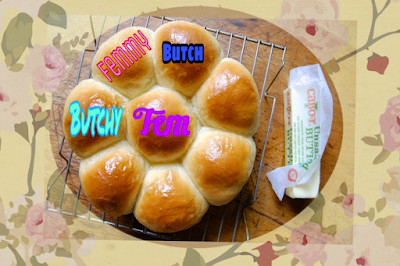 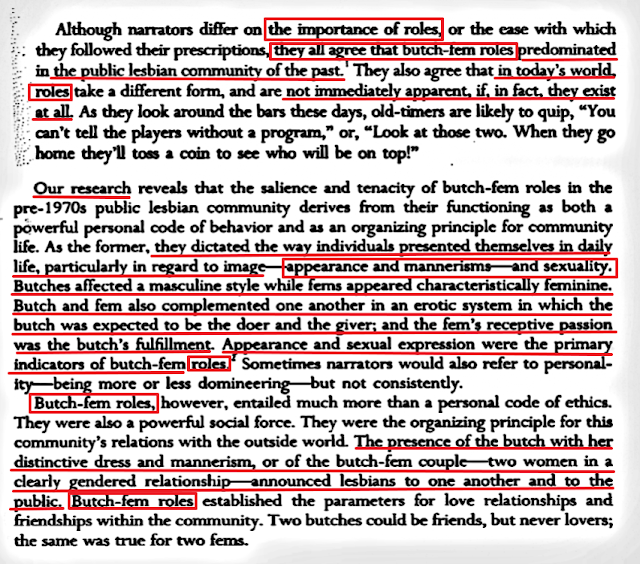 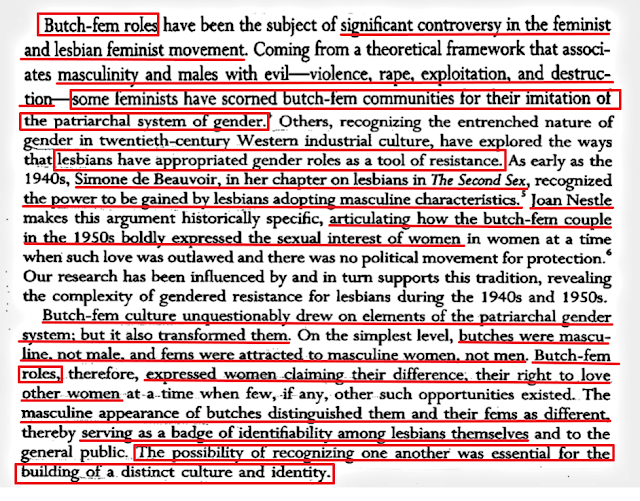