I'm sharing this recent comment left on Mrs Dirt's blog post Everyday Homophobia and How It Harms Homo Females Every Day, that articulates harsh inner turmoil Homo Females-young and old feel/deal with, in our vast unavoidable experiences with STRAIGHTBIANS/Straight females. 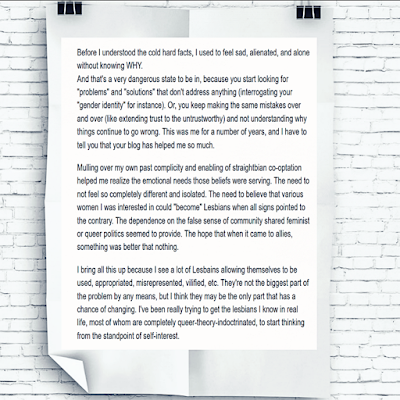 And it is precisely the conclusion drawn (the ONLY conclusion that can be drawn) that has lead myself and a growing number of Homo Females to conclude If you are not Us (Homo Female) then you are against Us!

When I first began blogging nearly 10 years ago now, writing about the many problematics with Transgender/transition I was quickly taken up (up NOT in) by the RadFems. And for a brief moment (an eye blink) I felt hopeful, like there were other females questioning/writing and working to halt/change the deadly Heterosexually driven homophobic solution to all things deemed queer/sexually deviant. I say hopeful because since the mid 1990s I personally witnessed a tide of transition drown core numbers of STRAIGHTBIANS, much in the way AIDS swallowed Gay men in the 80's.

Only this disease wasnt spread by love/lust or contaminated blood, (although both AIDS and Transgender share the same foundation-Homophobia) instead the Lesbian plague was/is supported/spread because of the minority status of Lesbians/Heterocentrism/narcissistic selfishness of privileged (het) Women, who for varying reasons CHOOSE to call/define themselves as Lesbian! A deadly amalgam indeed!

One can only witness the step by step process of
I'm not speaking of merely STRAIGHTBIANS and Homo Females on a computer screen, but known flesh and blood! Many of whom because they transitioned decades ago are now dead or ill from transition drugs/surgeries.

So to find (what I thought) were other females fighting the good fight, I was hopeful together we could really bring these issues to the forefront of the Lesbian community/Lesbian leaders (since many of these Women claimed to be Lesbians themselves or Lesbian/ allies) and once again common sense would be put in its rightful place.

What I found instead was a collection of sterile/ineffective/infertile circular verbiage that went 'round and 'round like a not-so-merry merry-go-round, accompanied by a butt load of Women nearly breaking their own arms to pat themselves on their proverbial backs! At first it seemed as though they werent hearing the harrowing words/stories I was telling. I distinctly remember being reminded of stories I had read where a Jew would escaped a death camp and make their way to a nearby village warning other Jews that down the road a few miles Germans are mass exterminating Jews, only to be met with pure disbelief/uninterest.

What I soon realized was the disinterest didnt stem from disbelief, but disinterest since those being slowly murdered werent the RadFems who called themselves lesbian, but Homo Females themselves-who were undesired/unwanted. Therefore it wasnt exactly a shocker to realize I was the ONLY Homo Female specifically writing about STRAIGHTBIANS and Homo Females transitioning and the circumstances that made Lesbian transition ripe. RadFems then/now were very much like 70's RadFems, having fun playing at a Homophobic Hetsplained IDEA of Lesbian (hairy armpits/legs, Paul Bunyan outfit, Moe Howard hairdo with a HEAVY focus on Men...Men men men-patriarchy patriarchy patriarchy-MRA MRA MRA)!

RadFems/Feminists past (RadFem/Feminists today ignore these facts) jumped on the John Money-brains-have-no-sex bandwagon because they passively were handed an explanation-gender-(FROM MEN) on why men run the world and not them-SOCIALIZATION not Biology! They didnt care this info came from known MALE pedophiles whose "studies" consisted of boy twins being forced to act out Heterosexual male/female sex roles and pedophiles masturbating infants to see how long it took them to get an erection! Studies that as quick as they were published were soon found to have been fudged by said pedophiles. RadFems/Feminists then, like now didnt give a flying fuck, they heard what they wanted to hear and damn anyone/everyone saying anything different!

The foolish thinking was if sex (biology) could be removed from discourse and replaced with gender (socialization) then the unfair advantages males have utilized over females would level out and eventually Women would be equal with Men. Feminist leaders like Bella Abzug even took this thinking to the larger stage of  UN conference/s:


"The concept of gender is embedded in contemporary social, political and legal discourse. ….The meaning of the word gender has evolved as differentiated from the word sex to express the reality that women’s and men’s roles and status are socially constructed and subject to change…The current attempt by several Member States to expunge the word gender from the Platform for Action and to replace it with the word sex is an insulting and demeaning attempt to reverse the gains made by women, to intimidate us, and to block further progress. We urge the small number of male and female delegates seeking to side-track and sabotage the empowerment of women to cease this diversionary tactic. They will not succeed. They will only waste precious time. We will not go back to subordinate inferior roles."

Twenty GENDER-NOT-SEX years later and grown men are using the Ladies, a Man is woMAN of the year, business's are being sued for using CORRECT pronoun usage and Female biology/biological functions are up for grabs or forbidden to use altogether. The ever growing patronage surrounding Transgender medically/socially/legally proliferated beyond the hallways of John Hopkins and the like because Radical Feminist/Feminist simultaneously Green lighted Gender while road blocking Sex.

Its horrifically obvious Radical Feminists/Feminists were/are as versed in the rules of Chess, in as much as Hitler was the game Risk. Perhap Hitlerian too, Radical Feminist/Feminist's dont care about the fallout, dont care about any damages their nonsense creates for Biological Homosexual Females, and dont care the war has been long lost.
Forty plus years of RadFems/Feminists (Het Women) using Gender to change the world to their mercurial whims and nada. Less than ten years of Het Males using Gender and they're woMen of the year! Thats not hyperbole, thats biology!

A few days ago this was said about me by two RadFem/Feminists: 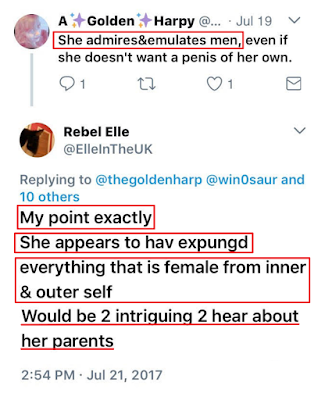 If we set aside their narrow Hetsplaining of Dyke, coupled with their obvious Homophobia, by their own heterocentric logic, their invalidation of me as female (eschewing all (Het) female/feminine tropes equals not female) they validate any male who does likewise (expunge all male/masculine tropes equals woMAN). This example, in a nutshell, assisted in how Radical Feminism/Feminism gentlemanly held the door open for Trans Males to clumsily Kitten Heel over the corpses (living and dead) of Lesbians and Gays, and continue doing so today.

Radical Feminism's/Feminism's entire warped anti-biology tenet says at once that Lesbian is behavioural/choice (behaviour that involves a sexual relationship between two females) and that biological males can in fact be women since biology is irrelevant to brain non sexed plasticity. When males took the Gender ball from them and ran for a touchdown, RadFems/Feminists screamed from their lung tops TRANS WOMEN ARE NOT WOMEN. So RadFems/Feminists had to change their tune of anti essentialism/anti-biology to include the lived experience of woman in flimsy effort to stop trans males from using RadFems/Feminists ideas to beat them at their own game, which by the way they have. And by calling trans males even some part of woman legitimated that these men were in fact to some extent-woMEN. This lead some RadFems/Feminists to use MTT-male-to-trans in a too late in the game last ditch effort to stop Trans males from scoring the ultimate touchdown. Obviously by assigning (in social media only) trans males to a nebulous gender spectrum, trans males could still retain their bought and paid for womanness because MTT rants from passive/aggressive Het Women fell on deaf ears.

There are a shit ton more of Het Women than there are Homo Females, and it is they who primarily give birth to the world of humans, not us. It is THEY who have the power (were they able to think/process beyond their Heterosexually driven brains/bodies) to make the future a better place for people, animals and earth. Five thousand plus years of wash/rinse/repeat suggests to me they cannot function beyond their Heterosexuality and therefore are not only NOT a friend/ally of Homo Females, they arent to anyone, including themselves.

I dont say all this to make Homo Females feel hopeless. I say this because like the commenter quoted at the beginning of this post, despite the growing number of Homo Females who have realised IF YOU ARE NOT US, YOU ARE AGAINST US is true, there are still far too many Homo Females asleep at the wheel. Homo Females present and future deserve the benefits from knowing/understanding being female alone isnt enough to bond over with Het females or Het females who self ID as lesbian, and that it is biologically IMPOSSIBLE for them (Het Females) to do so.