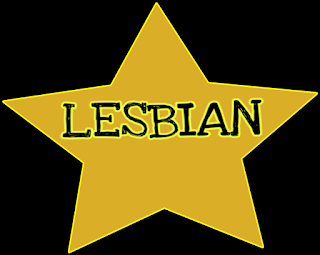 Most Dykes over the age of twenty have heard the term Gold Star Lesbian, most however have rarely ever used the term ourselves. Some general consensus on Gold Star Lesbians:
Here's the thing, Lesbians do not use fuck buddy scales to weigh who is more Lesbian. Where you see this DICKsgusting strategy employed, rest assured there is a (damaged/warped/crazy) Straight/STRAIGHTBIAN behind it! The derivatives of Gold Star Lesbian spring from two direct areas that spell out in no uncertain terms-HeteroSEXual! The first derivative being SEX and the second being MEN.

While sex figures slightly in Lesbian, it isnt the end-all and be-all of all Dykes. Our Lesbian genetics were mapped long before we born or even conceived, yet Heterosexuals continue to paint Lesbian with the broad brush stroke of girl on girl/women on women/female on female SEX.

Emotional/sexual attraction to some Lesbians encompasses ONLY Lesbian romantic attraction. How differently Lesbians process information/act according to those processes and behave/how differently Lesbian brains work when compared to Heterosexual females/males (gay and straight) never factors in, even though THAT is what differentiates Lesbians from everybody WAY MORE than who we fuck/fucks us!

Whenever Lesbians are defined by sex, defined by how many males we fucked or didnt fuck, Lesbian is absent. Gold Star Lesbian was created by bitter, angry jealous STRAIGHT women/Radical Feminists/STRAIGHTBIANS to use in the way Transgender use cis to batter anyone not trans.

Dykes do NOT have to apologize for being Dykes! Nor do we call ourselves Gold Star Lesbians since there is no reason to. Mentally damaged, fucked up warped dick thirsty STRAIGHT women/Radical Feminists trying to shame our primary attraction to other Lesbians and our desire to partner with those Lesbians (common brain processing/shared sexuality etc) is as DICKsgraceful as it is DICKsgusting!

Dykes dont need a rating system to know who we are and who we're attracted to and we certainly do not need a pre-school system to reward or shame us!

The Youth Trans Critical Professionals (who are neither critical nor professional) have REALLY stepped their foot in it with their latest (guest) post, makes their former trans poster child middle aged woman look like Mother Theresa. The group had consisted (to my knowledge at the time) one pro-trans male, a child murderer and a smattering of academic-y RadFems/Jungians/Feminists. Whether thats changed, I cant say, and while clearly the Trans Critical Pros (who are neither critical nor pro) were woefully or is it willfully homophobic? I can honestly conclude from their current guest, Youth Trans Critical Professionals (who are neither critical nor pro) now promote at worst, support at best:
Before IGNORANCE is latched onto by them like a life preserver, the info posted below was gathered within 10 minutes from a cursory look (I shudder to think what a thorough look would produce) and collected within 20 mins:

Youth Trans Critical Professionals (who are neither critical nor pro) latest guest post comes from a trans female who calls herself Todd A(lexander) Whitworth: 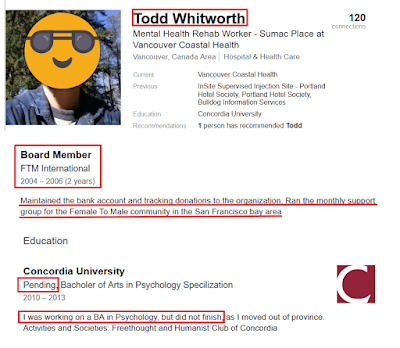 TAW who toyed on and off with transition for 20 plus years is trying to get a piece of the Transgender pie so many Trans are currently enjoying. Being that trans itself is no longer edgy or unique, she decided to:

Her tweets and FB accounts ad nauseam refrain is this:

She forgot to include racist and misogynists. I mean if you're going to make yourself special, why not be honest and go the whole hog.

She is also a penchant for Pence: 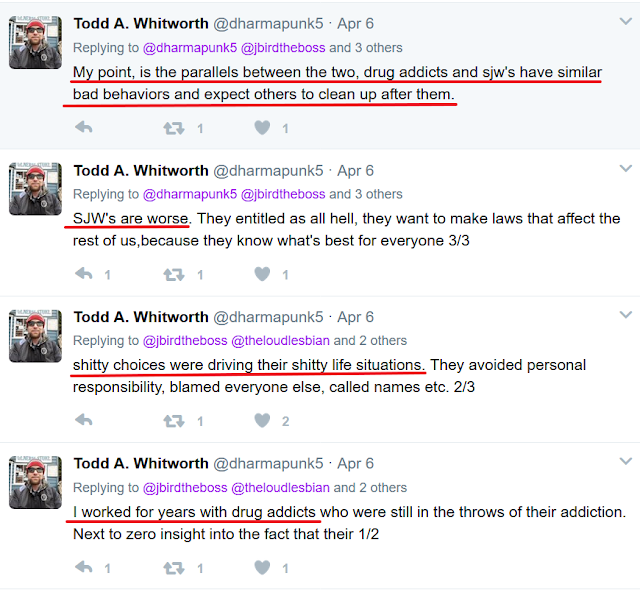 While she proclaims to be gay (her partner Scott B is a self hating Homosexual who can at least tell himself since he's with a straight women that makes him straight too!) she is completely homophobic and VERY Homo ignorant. Hmmm just the type the Trans Critical Pros (who are neither critical nor pro) love: 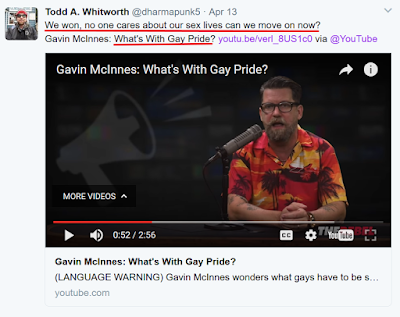 The above BTW is her idol! More on that romance later. How about women/feminism/abortion/patriarchy etc? 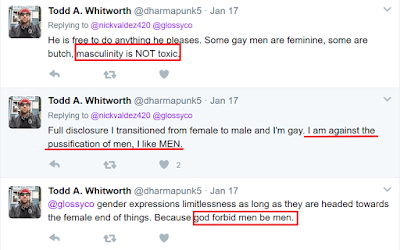 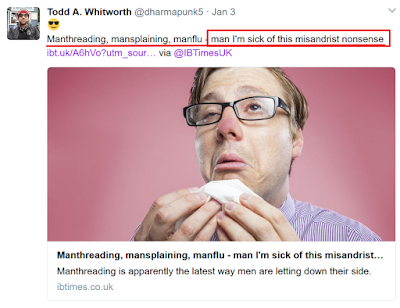 Back to her gaymance with (no, wait-not her gay male lover) but instead: 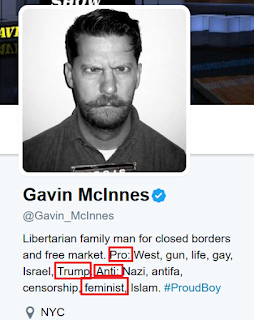 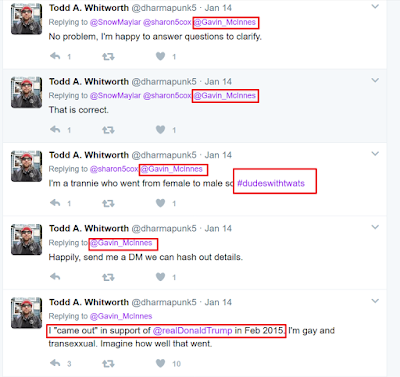 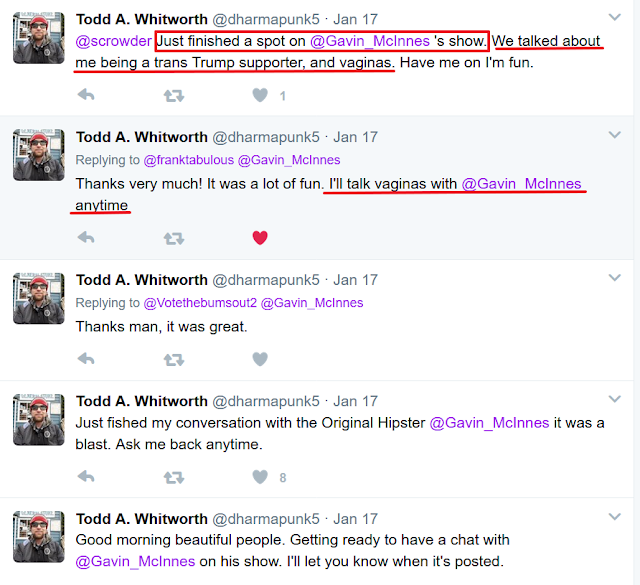 Who is Gavin McInnes?

What does TAW think of Proud Boys???

I and millions of other Bloggers have been making our points for YEARS without resorting to using self hating misogynistic racist xenophilic homophobes. I can only conclude from this guest poster and others that the Youth Trans Critical Professionals (who are neither critical nor professional) support/hold at least some of their guest's loathsome proclivities.

Youth Trans Critical Professionals-if this is their critical, lord spare the children they claim to want to help!