Since the horror of the November presidential results, aside from shock, sadness and anger some unnameable fog sifted over our daily lives. Even those happy with Trump seemed dispirited this Christmas. And despite all those I personally know, including myself and my wife, as much as we struggled to feel some sort of Christmas spirit, that spirit evaded us through old time Christmas songs, Christmas decorations and even our beautiful white Christmas tree that we with hearts full, married in front of last year. I could not shake this feeling anymore than I could name it, till last week.

While standing in line at our local grocery store it hit me, September 1st 1939, a poem by W.H. Auden and the date of the official beginning of World War II. While waiting my turn to put my groceries on the conveyor belt I thought: "I sit in one of the dives/On Fifty-second Street/Uncertain and afraid/As the clever hopes expire/Of a low dishonest decade". Thats it! Once home, I flipped through my collected Auden and read the poem in full. I read it to Anna later, both of us in tears. I felt compelled (or guided) by Auden to write something updated from September 1st 1939 to January 20th 2017, when Trump will be sworn in as US President. I dont find it a coincidence that January 20th marks the anniversary of the Wannsee Conference in 1942, where Nazi officials decided the Answer to the Jewish Question-the Final Solution. 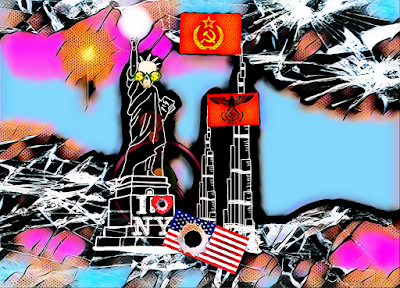 I sit huddled, muddled in my apartment
on a dreary New Years Eve 2016,
wavering between worry and fear.
Contemplating a rising angst and ire
threatening the icy December air.
Something we carelessly thought
dead and buried long ago
has now been unearthed,
Biology once again speaks
its historical truths, the numbers
cannot hide their racial and feminine dearth.

Between Google and Wikipedia
we can excavate whats what.
From Madonna until now, pop
culture and pansy liberalism has
driven the US impotent and daft.
The Papa paradigm that began in Queens
shaped a sociopathic toddler to
be our next President elect.
And not All the Kings horses and All the Kings men
can repair what occurs in childhood
damaging the brain.

Wise common sensed Santayana knew
where suicidal Sylvia's black car
of Lethe rode,
Where our Ipod History
stays always on repeat.
Where Today is all there is
and Yesterday never exists
Preventing lessons to be learned.
Where Hate goes on hate
while War holds hands with grief
and nothing ever changes, and no catastrophe is ever too great.

Trump Towers dot the calm skyline
Postiche over nature is
Collective Man's ruse.
The Earth has become a dime-store, where
each of our necks hangs in Consumerism's noose.
But happiness has no price tag.
And Love has never been for sale.
Utopia disappears in a landfill
drowning in tons of polystyrene.
Global commerce has made us no closer
it merely masks our global wail.

Standing in the grocery line
chatter assumes all will be okay
But the faces betray their words
and gloom has its way.
Make believe only works for children
we cannot birthday wish for change.
Hope evaporates with every
dyke, nigger, faggot and jew.
Yesterday, that was never gone
returns with a vengeance.
Prejudice takes a breath and lives on.

The Iron Curtain takes a bow
But this is not the Ballet Russes
This is the United States!
What Janis Joplin said is True
about real Love.
Performing for thousands on Instagram
Facebook or Youtube may increase
the friends list of every man, women and child,
But what Social Media cannot do
is replace the interconnectedness
of the real face to face.

A minute past midnight and
New Year's resolutions start their moan
I will eat less and exercise more-
I'll be a better person and start going to church.
While in a few months time our resolutions
like dust, litter the floor.
Rote soon resumes its power at home, at work
and at play. While politics change by the hour,
who can keep up with who to hate or why?
The First Amendment has been impeached-
Some will fight, but most stay silently resigned.

If freedom of speech is removed
do I still have a voice to speak?
I refuse the Trumpeter's declare
that the Individual is dead and we are
all one State. If citizenry now means silence
I'll die with raised fists squeaking my squeak.
Death is not merely the Great Equalizer-
He proves with each and every death
That living, we are All alone.
Take it as proverb or as koan
But no matter, rich or poor, without Love we All die.

With blue pilled prescriptions in hand
Eros, erect bleats.
Some where between Caligula and Nero
the Hour Glass loses her sand.
And while certainly All will not be lost,
For now, Philistines rule our playground
while Hate and Ignorance play dodgeball with our lives.
It will take decades to figure out the cost.
On your feet or on your knees,
does it really matter?
When an impertinent toddler has been give the keys?