Between researching, ruminating and writing on the vast expanse that is NOT Lesbian, I also have to call out Lesbian symbolism as well. Symbolism, that like so much else NOT Lesbian, began with Radical (lesbian) Feminism in the early 70's. In their (RadFem) pursuit/recruit of lesbian aka sisterhood through collective female heterosexual angst/anger and hatred of men in some cases, RadFems needed something to symbolize their lesbian pride. This is what they came up with: 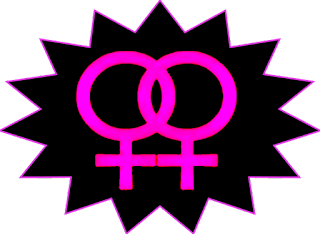 RadFems took the symbol for female and put it together with another symbol for female and voila, the symbol for LESBIAN was born! NOT! This symbol perfectly defines what RadFems and general society see as Lesbian. Any two women together and/or who kissed or where some sort of sexual relations have occurred at least once. Lesbian whether among RadFems, Feminists, Gender Critical, LibFems or the general public never exists on its/our own. Lesbian always has to be accompanied with another female (and by female I mean any "woman-identified woman"-Lesbian biology not required).

In the Sisterhood of Radical lesbian Feminism, BEING a Lesbian wasnt/isnt a requirement, and in fact BEING a Lesbian was/is often unacceptable. BEING a Lesbian, thinking with a Lesbian brain, functioning with a Lesbian body, threw a HUGE mannish wrench into RadFems groups/politics (we were/are accused of acting like men to silence us), so whenever a Lesbian spoke her mind (as we generally do), Lesbians were quickly excised from RadFem groups/political platforms. However, our biology (Lesbian) and the prime symbol associated with Lesbian continues to be used/abused by RadFems/Feminists/straight queers/STRAIGHTBIANS/pornographers/the tv/film industry and countless others.

Unfortunately the popularity of this

UNLesbian symbol trickled down into our once healthy Lesbian drinking water, poisoning generations of Lesbians to accept the hetsplained IDEA that Lesbian is any two women together, whether even they themselves call their relationship Lesbian. While according to the other side of their face-Lesbian on its own does NOT exist until we reach sexually maturity and then act on our sexual feelings.


RadFems version of Lesbian-ANY "woman-identified woman who does not fuck men. It does not mean compulsory sexual activity with women".


The general public's version of Lesbian-Any two females doing anything together that might turn a male on.

This is the first of a short series of posts on Lesbian Biology-Lesbian as Individual.