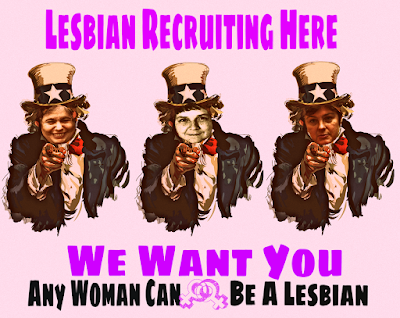 From the outset of Second Wave feminism/women's liberation, Lesbians were silenced, banished, then Lesbian once emptied of actual Lesbians was used as an idea to house bored house wives and angry women fed up with men. Lesbian then took on a widespread political significance by declaring that "any women can be a lesbian"! A group calling themselves RadicalLesbians begin their 1970's essay The Women Identified Woman by posing the question "What is a lesbian?" and answering "A lesbian is the rage of all women condensed to the point of explosion." Women, particularly younger women were angry to the point of explosion! Angry at the doormat lifestyles they perceived their (unhappy/depressed) mothers to have expected them to inherit, and angry at the sexism that seemed to stop/harass them whether they turned toward higher education, job career or even marriage/motherhood.

Radical Lesbianism promised straight women a utopia they believed they could never obtain from men or with men. A No Man's Land where Lesbian was a multi functional Swiss army's knife, used to give false courage, build a floor board, lay a carpet, gut any man with a sexist compliment or kill any would-be rapist. Radical Lesbians claimed that Lesbians
This clearly was not written by a Lesbian anymore than it was written speaking to Lesbians, it is purely heterosexual! Heterosexual women who co-opted Lesbian, then recruited other unhappy/dissatisfied heterosexual women who saw themselves as the hetsplained Lesbian heterosexual women's libbers defined.
In other words, remove sexism and sexual orientation would be removed from human biology forever! This is the ignorant simplistic and dare I say feminist ideology that still plagues Radical Feminism today, merely replace sex roles with gender roles.
Radical Lesbian/Feminists completely insult Lesbians by removing Lesbian biology, Lesbian history and assert Lesbian was/is nothing more than a tool used by men to keep women (all women being heterosexual) in line/under the thumbs of men!

Popular Radical Lesbian/Feminists mantras and man hating mottoes used to recruit/ensnare heterosexual women into political lesbianism:
Lesbians were never welcome in Radical Lesbian Feminists groups/movements, but Rad Lez Fem groups/movements sure used the IDEA of Lesbian to house their man hating precepts and recruited using heterosexual shared experiences of sexism, male violence and displeasure with their own sex role. None of which had a single thing to do whatsoever with Lesbians as individuals, Lesbian couples, Lesbian needs, Lesbian Healthcare or basic civil liberties that Lesbians lacked! None of these issues were or are adequately addressed by Radical Lesbian Feminists, then or now. Radical Lesbian Feminists prime focus has always been on men/about men, another clue we werent ever dealing with actual Lesbians, then or now. Man hating/Lesbian recruiting Rad Lez Fems, werent and arent Lesbians and those they recruit are rarely also Lesbian.

Lesbian has merely been a carapace Radical Lesbian STRAIGHT/STRAIGHTBIAN Feminists slummed in where they could mutually bitch, moan and cower, too afraid to stand up to men and too weal to challenge male systems of power, for that you have to actually BE a Lesbian, not just call yourself one!