In our second UnStraightening Lesbian piece, we focus our attention on the VERY pedo/misogynistic/sado disturbed and VERY NON lesbian Pat aka Patrick Califia. We begin the sick treacherous road into Califia with a quote from NAMBLA's pro-pedophile website:


"Boy-lovers and the lesbians who have young lovers are the only people offering a hand to help young women and men cross the difficult terrain between straight society and the gay community. They are not child molesters. The child abusers are priests, teachers, therapists, cops and parents who force their stale morality onto the young people in their custody. Instead of condemning pedophiles for their involvement with lesbian and gay youth, we should be supporting them."


~ Pat Califia, lesbian author and activist,
in The Advocate, October, 1980. 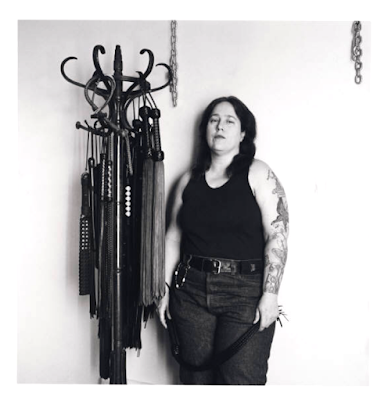 Califia was first taken up by the Lesbian press when she put out Sapphistry: The Book of Lesbian Sexuality. Again, like Susie (not so) Bright, we have a sexually disturbed/screwed up straight woman, DICKtating lesbian sex to lesbians! While this book didnt reveal how disturbed Califia was (is), it did reveal she didnt know the first thing about lesbian relationships nor the sex that occurs between lesbian lovers.

Another of her lesbian successes came in the form of the fictive shorts, Macho Sluts collection. Each short story giving testament to Califia's pure hatred for the female sex, lesbian or otherwise.

REAL Lesbians do not only NOT figure in anything Califia wrote, REAL lesbians DO NOT WANT TO BE RAPED OR FUCKED BY ANY MALE and for that matter raped by anybody! Califia's SICKO fiction is just that, SICK! It isnt feminist, it isnt lesbian and it isnt subversive, its subhuman and it reveals MORE about its writer than it EVER could about the women (lesbians) it claims to represent!

Califia goes on to minimize the number of missing and sexually abused children: (Perhaps we could arrange a sit down between Califia and John Walsh?)


"The campaign against child pornography was fueled by related moral hysteria over missing children. During the early '80s, the American media was full of melodramatic accounts of the “millions” of children who were kidnapped and then sexually abused by strangers"

Califia further enlightens us on what lesbian feminist's sexually desire and do with lesbian children/youth:


"American society has become rabidly phobic about any sexual contact between adults and minors. In this social climate, very few lesbians will admit to having cross-generational relationships or defend even the abstract idea of them. Within the lesbian community, other forces exist (spaceships/laser beams?) that prevent girl-lovers and underage lesbians from telling their own stories. We encourage incest survivors to break the silence and tell family secrets about violence and sexual abuse. But this sisterly support turns to outrage and cries for silence if a woman wants to talk about being a sexually active child or even a teenager who was not traumatized by the experience. (Honey, trust me, YOU were/are seriously traumatized) Lesbian-feminism supposedly empowers women, but we are reluctant to see young women's sexual experiences as anything but victimization.


Lesbians work constantly to undo their racism, classism, able-bodyism, looksism, coupleism. and all other forms of prejudice. We give lip service to confronting ageism, but we do not really include underage lesbian and bisexual women in our community. The simple truth is that we are afraid to. We are afraid the state will come down on us, brand us as child molesters (NOT US honey, just YOU), and put us in jail."

In conclusion, Califia never was a lesbian, not before she transitioned (identifying with her abuser/s), nor since. What is painstakingly obvious is Califia was sexually abused by family, perhaps by church (Mormon). But rather than work through those horrors, become a healthy woman who managed to survive child sexual abuse, write and maybe reach other women, Califia glamorized and glorified her abuse under Lesbianism! And worse, harmed and tortured other women in the name of Lesbianism!

Her pedestrian pornofied perversions were published in Lesbian presses, taking up money and space where REAL lesbian authors should have been published! What happened to those lesbian writers whose stories and novels got chuffed aside for Califia's pedophilic pleasure principles?


"At 45, I was terrified of changing my gender, afraid it would mean that I'd no longer be able to make a living, since my income was based on being a lesbian therapist and journalist."

How many Lesbian owned and operated bookstores closed because lesbians werent interested/could not relate to the filth and garbage published by so-called dyke presses these bookstores felt they should carry? I suspect like so-called lesbian magazines today (Curve/Diva), most were ran by warped/damaged STRAIGHTBIANS. Women who have the money/clout and straight privileges to call what they're doing lesbian, write about it, publish it and get praised as ground breaking lesbian works.

We hope LESBIAN readers of this series are starting to notice a pattern of behaviour, some common threads run through each woman featured in this series. We also want to make mention, we're not prudes, nor do we think or believe any lesbian should be, therefore we hope we drew a distinct line between playful kink and violent or pedophilic perversions.