John Money was born in New Zealand in 1921. Money later went to Victoria University, double majoring in philosophy and psychology. 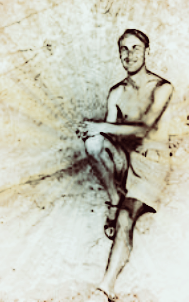 In 1947, At the age of 26, Money left for the US to pursue his doctorate which he later received in 1952 from Harvard. It was while Money was studying at Harvard that he became heavily interested in hermaphroditism and sexology. From Harvard, Money went to John's Hopkins, founding the
Office of Psychohormonal Research. It is during his early years (the 1950s) at John's Hopkins that Money, through his fixation with the intersex, particularly "fixing" infants with ambiguous genitalia, that Money helped to develop the Gender of rearing model for infants intersex or presumed intersex.
In working (altering/fixing) with intersex (children-adults) Money came to believe (theorize) that we all possess (what he called) a gender identity independent of our biological sex and IF the gender identity is socially constructed (via parents/family etc) by age two 1/2, the human, regardless of biological sex can and will function as the socialized gender ("sex of rearing could transcend external genital morphology" JM-supra note 52, at 336).

Meaning, if a baby was born male, but raised as a girl socially (think pink), the biological male would believe/function comfortably as a girl/woman, granted this mutable gender identity theory was born out of RARE intersex births ONLY.

John Money's other obsession developed after he became aware of the autogynephile/transsexual Christine Jorgensen, whose sex reassignment (in its early stage) was considered a success. Transsexuals peaked Money's interest, but like most (even today) studying transgenderism, Money never bothered with the follow up to realize Jorgensen's transition was a failure socially and medically, as he later died prematurely from multiple organ cancers.

John Money then went on a crusade:
Dr. Jones was uncomfortable performing surgeries on non intersex persons, so Money turned to the godfather of transsexualism Harry Benjamin, with Benjamin's help Money garnered John Hopkins to open the FIRST clinic in America (1965) for the medical treatment of transsexuals, named by John Money himself as the Gender Identity Clinic. Clearly Money's own warped psychosexual predilections fueled his lifelong obsession with intersex/transsexuals "I suffered from the guilt of being male...I wore the mark of man’s vile sexuality”—that is, the penis and testicles"..."I wondered if the world might really be a better place for women if not only farm animals but human males also were gelded at birth." Interestingly, despite Money's Gender Identity theory, gender identity MUST be forged by age 2 1/2 for success (according to Money), he completely ignored his theory where transsexuals were concerned. He also had no way to actually prove his Gender Identity theory, because of the ethical violations for experimenting on children. A medical mistake that occurred in 1966 in the form of a botched circumcision, would change all that for Dr. Money, Women's Lib (Radical Feminism) and Transgender as we know it today.

Because John Colapinto's book As Nature Made Him documents a thorough account of David Reimer's tragic story, for the purposes of this post I will supply simply the basics. In 1965 a set of male identical twins (Bruce and Brian) were born to Ron and Janet Reimer. Eight months after their birth they were to receive a routine circumcision, and instead the first twin operated on (Bruce) was horrible mutilated:
Bruce's penis was irreparably damaged and his young, naive, frightened parents didnt know what to do or where to turn. Ten months later, by pure accident they saw a program featuring John Money speaking about Gender Identity and his successes with both intersex and transsexuals. It was not long before the Reimers were in touch with Money, whom felt as though he hit a jackpot, not only could he prove his Gender Identity theory on having Bruce raised as a girl, BUT Bruce was an experimenters dream, he had an identical twin, Brian. It didnt take long for Money to convince Ron and Janet that Bruce could and should (for his own good) be raised as a girl. The outcome of this case would prove once and for all that it was nurture more than nature that shaped male and female behaviour, or so John Money claimed.

Brenda, as Bruce was renamed to suit his/her NEW Gender Identity and was soon surgically butchered in order to get the toddler ready for later surgeries that would carve a hole in his body to function as a penis pleaser for his/her future husband:
John Money's Gender Identity experiment on Brenda Reimer went far beyond the pages of medical journals and landed into the living rooms of the general public via TV interviews and news articles. Even Time magazine boasted that John Money PROVED brains are mutable and unsexed at birth. Women's Liberation/Radical Feminists quickly held up Money's Gender Identity experiment as proof that feminism could change the future of male/female behaviour if children were simply reached at a young enough age. Boys could be taught to be a kinder gentler sex and girls could be taught to excel in math and science, together bringing a balance, harmony and equality long lacking in humankind. Or could they?

In lieu of the length of this post, I'm presenting it in two parts, stay tuned for part two later this week.