NASP-Coercing a Transgender Agenda at a School Near You

In my last post I wrote about what seemed to be an odd choice NASP- National Association of School Psychologists had for their 2016 convention's key note speaker-transgender male-Janet Mock. In this post it will become apparent that a transgender key note speaker who has no psychology (school or otherwise) experience with the exception of his mental disorder diagnosis (Gender Identity Disorder/Gender Dysphoria-Although in his case Ego Dystonic Homosexuality is more apt) is less coincidence/poor choice and more Transgender Agenda.

The NASP 2016 convention, where LGBT population were concerned, was unanimously focused on transgenders and where LGB was the focus, something was VERY rotten in Denmark! The NASP convention held numerous program sessions convention goers could attend and which can be searched on their website. Here is the list of convention sessions under Transgender: 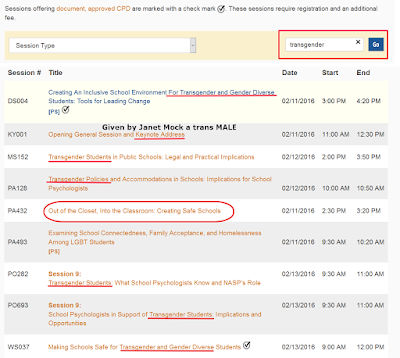 The convention held sessions SPECIFICALLY targeting transgender students/issues, and issues under the umbrella LGBTQ. Even on this list where "coming out" headlines where one would naturally presume to be gay and lesbian specific, it isnt: 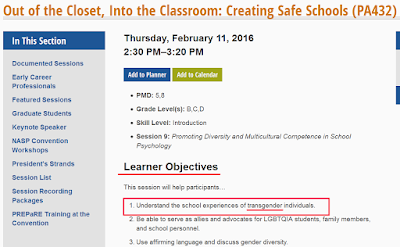 The prime objective to "coming out" is aimed at "transgender individuals" using narratives and vernacular historically specific to gay/lesbian culture. Another session attempted to link the already blurred autism spectrum disorder with transgenderism:

Lets see how many sessions were devoted to gay students/gay issues specifically: 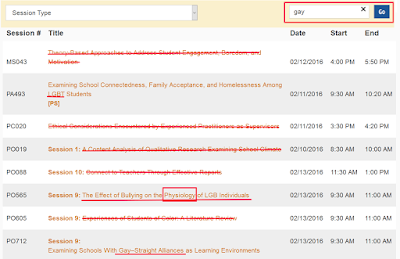 The crossed out sessions werent actually gay related, but flagged due to session presenters/descriptions that possessed the letters gay somewhere, I underline in red sessions pertaining to gay students. As you can see there were NONE specifically related to gay male students or issues faced by gay male students that differ vastly from all other students. Session 9 that dealt with LGB (sans T) students will be discussed shortly.

Next I sought out sessions specifically dealing with lesbian students/lesbian issues:

As you can see, NOTHING. No session in the hundreds of sessions at NASP's 2016 convention dealt specifically with lesbian students. Lesbians fell under the umbrella of two sessions, one dealing with homeless, the other (session 9 shared with gay males and bisexuals) I'll delve into that next.

Session 9-The Effects of Bullying on the Physiology of LGB Individuals is interesting: 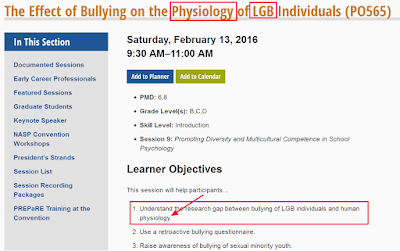 This presentation isnt about how schools can fight or counteract bullying of LGB students, it is about cortisol levels (stress) in LGB students: 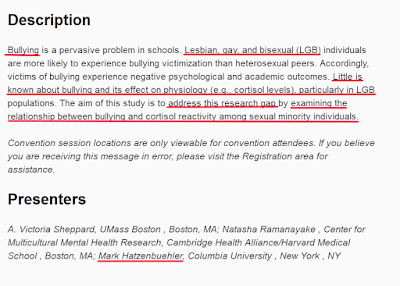 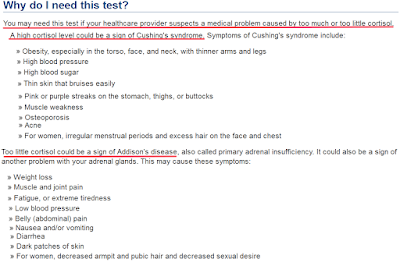 why was there a program/session aimed at school psychologists targeting LGB students and their cortisol levels? Is this the next Big Pharma jackpot school psychologists are being sold on? Gay and Lesbian students who refuse the transgender-transition-jackpot-box have high stress levels and need to be issued anti anxiety meds? And when they kill themselves from taking these drugs,  it can be passed off as gay and lesbian students have a higher suicide risk than other kids? Teenage anorexics certainly would have higher stress levels. Racial minority students. Some religious students. Over weight students. Unpopular students. Welfare students. Inner city students. Trailer park students. Sexually abused students. Foster care students and on and on. So WHY focus on LGB specifically????

From the transgender KEYnote speaker, the copious amounts of transgender handouts and psych sessions, to the complete absence of focus on gay or lesbian students irrespective of all else-NASP 2016 School Psychology Convention unequivocally had a TRANSGENDER AGENDA! NASP is clearly following APA transgender protocols, forcing school policies down the throats and up the asses of school psychologists throughout the county. Naysayers and gay and lesbian student supporters beware or reputations, licensures and jobs will be at stake.