Loretta Mary Aiken was born in NC in the mid 1890's, one of sixteen children. She is better known as Jackie MOMS Mabley. Jackie's early years were bathed in tragedy and swaddled in trauma, beginning with her father (volunteer fireman) dying in a truck explosion when she was eleven, then her mother, two years later on Christmas day, carelessly mowed down by a truck. 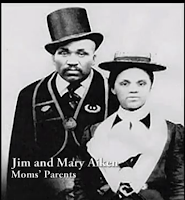 Before Jackie could even fully grieve the loss of both her parents, she was raped twice. First by an older black man, then a few years later by a white sheriff. Both rapes resulted in pregnancies, and both children were put into adoption, all by age fourteen. With pain in her heart, wisdom in her soul and talent that can only be born from such tragedy, fourteen year old Jackie left North Carolina on her own.

Jackie soon joined a traveling vaudeville show in Ohio singing, dancing and perfecting her craft in comedic skits. In the early 1920's Jackie toured alongside the vaudeville duo ButterBeans and Susie, giving her more opportunities and greater audience exposure. 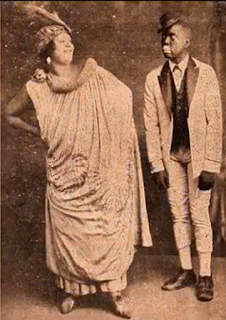 Jackie moved on and moved up (with their insistence) from ButterBeans and Susie to performing with the Chitlin Circuit, where she made full use of the wise old lady character Moms, she had developed while just a young woman with BB and Susie. 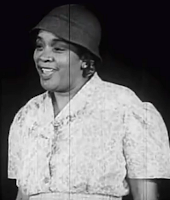 Jackie used her Moms character to get away with raw social commentary on race, that could have gotten her jailed or worse as Jackie-young lesbian black woman. Jackie didnt hide her sexuality from those she worked with, and was often treated by male performers as one of the guys. Jackie was an out black lesbian thirty years before civil rights and forty years before the Gay/Lesbian rights movement. 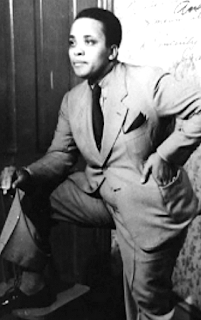 In the mid twenties, Jackie traveled to New York, performing Harlem Renaissance theaters like Connie's Inn and the Cotton Club. Jackie often performed with the likes of Louis Armstrong, Cab Calloway, Count Basie and Duke Ellington. In the early thirties, Jackie even worked with writer Zora Neale Hurston on a Broadway show Fast and Furious: A Colored Revue in 37 Scenes, including Paul Robeson's Emperor Jones in 1933. 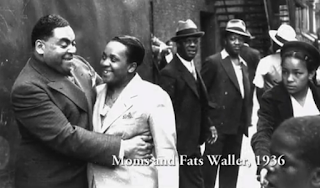 At age 39, Jackie became the first female comedian to perform at the Harlem's Apollo Theater. 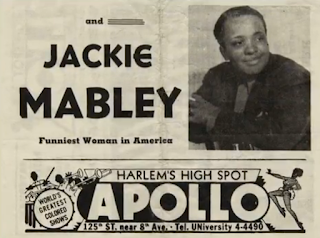 In the 1950's Jackie began recording her comedy skits on record to great success. Jackie later found mild success in television appearances on The Smothers Brothers Comedy Hour, The Ed Sullivan Show and The Bill Cosby Show. Her raunchiness, racial commentary and raw wit kept her from achieving greater television exposure at that time.

In 1974 Jackie starred in the film Amazing Grace where she suffered a heart attack while on set. Jackie received a pacemaker and three weeks later was back on the set to finish the film. Jackie said regarding having found film success so late in life "I would have liked to have gotten my chance earlier, but that's the way things were in those days...better times are coming."
From the film Amazing Grace:

Jackie MOMS Mabley WAS woman different. Jackie's traumatic youth may have dented her, but Jackie didnt let it dominate her. Unlike Nietzsche's Übermensch, what didnt kill Jackie, made her more human/e. Jackie used humour to connect her audience to the collective pain they all shared in some way or other. And by artfully forging that deep connection through her skillful use of humour, Jackie made herself stronger.

Doing Woman Different even when she became the wise old lady she had portrayed most of her adult life, in 1969 Jackie recorded the tear jerker Abraham, Martin and John and became (and is still)  the oldest person to have top 100 hit. I leave you with that: