There is a growing gap in an already wide hole between those diagnosed for transition treatment and the criteria used to determine who is slated to be transitioned. This gravid breach between criteria and symptom is already creating diagnostic holes you can fit a telephone pole through. Despite the anti gay/lesbian campaign lobbied by the dynamic duo autogynephiles/neo-liberals to ferret out/diagnose and transition gay/lesbian children (through school policies/parental scare tactics) adding to the voluminous Trans Trenders (once lesbian only), there is now a growing number of straight girls diagnosed as Gender Dysphoric as well, throwing a serious wrench in the Gender Dysphoria machine. Straight girls who are disaffected, dissatisfied, rebellious, malcontented, sexually abused, sexually adventurous, eating disordered or just plain unhappily suffering through puberty are seeking transition as their own personal jesus, then being anointed by the holy trinity (Trans Politics/Gender Therapists/Mad Medical Machine) into autogynephilic fodder as proof-in-numbers for Trans Politic propaganda grist!

The trouble with this is, the straight girls making up the recent surge in Gender Dysphoria diagnosis arent following the Gender Identity Disorder/Gender Incongruent/Gender Dysphoria script originally written in the blood of lesbian narratives: 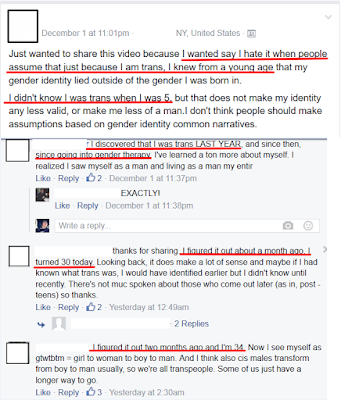 Conversations such as the one posted here were rare just a few short years ago, currently they've become commonplace in transgender social media sites across the net. Transdora's Box once opened, has spilled beyond the gay/lesbian community used and scapegoated to legitimize the sexual perversions of cross dressers.

All the nauseating contents of Transdora's Box; self doubt, self hatred, internalized homophobia, female hatred, female jealousy, internalized misogyny, pathological fear of not fitting in, pathological fears of being judged, intense discomfort with the Gender Straight Jacket, intense fear of challenging gender roles, intense fear of challenging sexism, sexual objectification of women, perceived and propagandized female limitations like all evils of this world, could not/would not and has not been contained.

But do not despair dear reader, I can see now an Elpis jutting her head just over the brim of Transdora's Box. This hope of halting the trans-machine will come at the cost of many female lives, both lesbian and straight. But as these non lesbian narratives do not fit the transgender script psychoanalytically (DSM) and medically required for transition, the diagnostics for this disorder will soon be out of date. And the likelihood of a revision in support of transitioning any hetero teen who jumps on the trans-popular-bandwagon, will solidify current transgender skeptics and make even the most pro-trans-advocate skeptical.