"The misfit is the one who is true and troubled, and filled with shining blood." Patti Smith 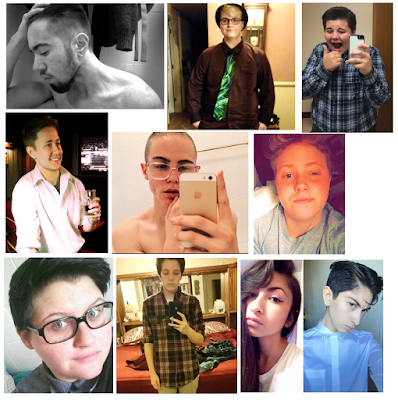 With regard to the lobotomy...."Only a handful of neurosurgeons in Europe and Asia were beginning to perform the surgery. Dr. Freeman, moreover, was a psychiatrist, not a surgeon. He believed surgical intervention into the brain to treat psychological disorders did not require the extensive surgical training that neurosurgeons spent years acquiring."

"Freeman's partner Watts, a trained surgeon, performed most of the surgeries under Freeman's direction, though by the mid-1940s, Freeman was performing lobotomies himself."

"...Freeman and a handful of colleagues around the world were convinced that lobotomies were the much-longed-for cure for deep depression, mental illness, and violent, erratic, and hyperactive behavior. But the procedure was never meant to be used on intellectually disabled individuals. The physiological and psychological side effects of the surgery varied widely, but for the most part patients suffered tremendously. The positive outcomes and effectiveness of these therapies in treating a broad range of mental illnesses and intellectual disabilities were small, though claims by practitioners painted a far rosier picture than the collective results indicated. Doctors like Walter Freeman and his colleagues publicized the few success stories and downplayed the failures-failures that ranged from the tragic loss of cognition to fatalities-which occurred with frightening frequency. Professionals claimed these failures were the patients' fault, a function of the deep flaws rooted in their compromised physical condition and damaged psychology. Nevertheless, in the summer of 1941, when the AMA warned against the use of lobotomy and called for more studies, Freeman and Watts were scheduling more lobotomies."

"Freeman and Watts were using their patients as case studies; there were no protocols, safeguards, or protections, nor were standards required or instituted by or upon the physicians as they experimented on their patients. The first lobotomy had been performed in Europe in 1935 by a Portuguese neurologist, Egas Moniz. Greatly criticized, Moniz was nevertheless convinced of the efficacy of slicing and disconnecting the frontal lobes from the rest of the brain. His first patients suffered from paranoid schizophrenia and depression; the patients seemingly improved after the surgery, giving Moniz the sort of proof he wanted to continue his studies In truth, the patients' relief was only temporary. In time, the side effects of the surgery would become more troubling and more disabling to the patient than the initial illness. Ironically and tragically, by 1949, when Moniz received the Nobel Prize in medicine, thousands of patients around the world had received the questionable treatment. Many were permanently disabled; some were dead."

"With few options, some psychiatrists and neurosurgeons looked to the lobotomy as a possible miracle cure for mentally ill, depressed and disabled patients. One patient subgroup included habitual criminals and juvenile offenders, but most were individuals whose behaviour simply defied conventional norms and conservative boundaries. Lobotomies and other psychosurgical procedures were performed on patients who suffered from not only crippling depression but also undefined violent behaviour, schizophrenia, obsessive-compulsive disorder, chronic pain, and bipolar and other mood disorders. The procedure was also used to treat perceived defective personality traits that included homosexuality, nymphomania, criminal behavior, and marijuana and drug addiction.  Freeman wold later describe potential patients as society's "misfits." Women, in particular, made up the largest group of lobotomy patients. Women who were depressed, had bipolar illness, or were sexually active outside the range of socially and culturally acceptable limits of the day-including single women exhibiting typical sexual desire-were considered candidates."

At McLeans Hospital in Belmont, Massachusetts, one of the premeir psychiatric hospitals in the nation, women represented 82% of the total number of lobotomy patients from 1938-1954. In hospitals across the country, women constituted between 60-80% of all lobotomy recipients, in spite of the fact that men comprised the majority of institutionalized patients.

I'm reminded of of the old snake oil salesmen: 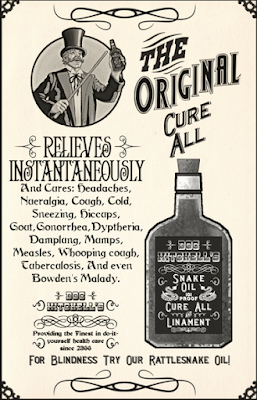 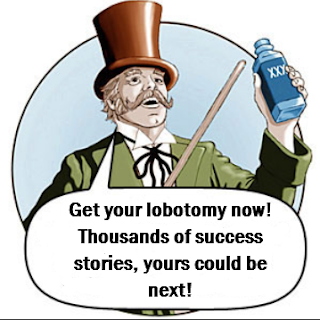 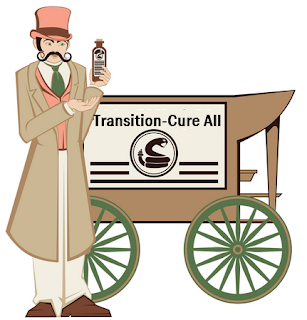