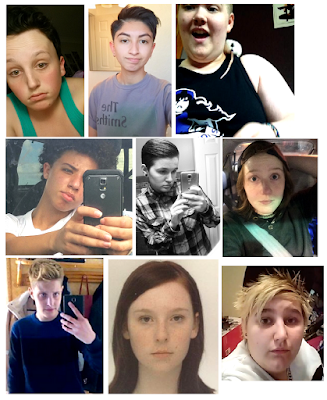 This blog received a comment last night to a past post that needed comment approval. Because its lazy assumptions and lack of critical thinking figure greatly in the tidal wave of continued Trans Trenders, I'm releasing it here:

Lets see what assumptions this blog can make based on HER comment:

My mother who died when I was 6, named me lynn marie and my father who died when I was 36 gave me his last name. I ashamed of neither, and no foe in the universe would EVER cause me hide nor change anything my parents gave me, from flesh to name. But it is precisely this bored lazy fear filled conformist youthful female woe that seeks the quick fix, the quick high, the quick buy to an edited social media reality of scarred bare chested throat bearded selfies that comprise the entire lezbophobic femalephobic woman hating Trans Trending tribe.

When fear deafens you to the voice of reason till your ears bleed, turning knowledge into your enemy and truth your foe, the quick brown fox jumps over the lazy dog.