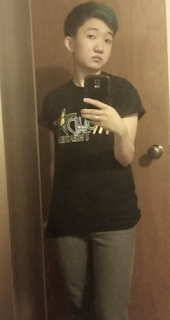 It is clear from an article Lee wrote for Our Lives earlier this year, her depression was tied directly to the jumble fuck created by Transgender Identity Politics, obscuring and confusing the view of lesbian youth. Add to that, as her obituary attests with its use of male pronouns, a family that much preferred a mock son, to a happy healthy lesbian daughter.

School resources and policies are flooding gay and lesbian teens with transgender propaganda that uses gay and lesbian narratives as its own, wrongly convincing gay and lesbian teens of being transgender! A condition that may please homophobic parents, but doubles the closet teens are struggling to get out of. Unfortunately in a time when it should be easier to be a gay or lesbian teen, transgender identity politics are strangling homosexual youth with poisonous hormones, mutilative surgeries, revisionist histories, false promises and transition-will-fix-everything-mirages! All tightening the noose, trans propaganda put around their young necks while the liberal left kicks the stool freeing their feet.