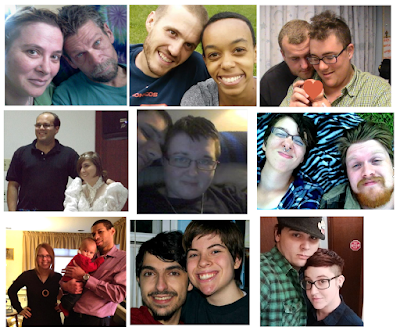 Married straight kinkster couples are the latest caboose to link with the ever growing Trans Trending Train. This is a tiny sample size from merely one trans female public FB group. Seems where hetero trans married males have failed to get their wives on board, other husbands have taken further steps and are instigating at worst/enabling at best, their wives into transition itself! The exact reasons behind this trend, I cannot say.

What I can say is, straight couples with children/straight couples-displaying their sex lives pornographically to the public for fun or profit, heavily challenge the DSM's criteria for Gender Dysphoria-the gateway to transition. Or at least one would think. Despite unequivocally not meeting correct Gender Dysphoria standards, women just like those seen here ARE being given the green light to life threatening hormones and rude crude unnecessary permanent surgeries.

This is problematic for many reasons, but for gays and lesbians, particular this one:

NEW is the heterosexual colonialism of gay/lesbian culture via transgender roadways, giving  description/legitimacy to heterosexual perversions! The complete RAPE and PILFERING of centuries of tears, fears, abuses, murders, struggles, experiences, strengths, pride, prejudice and triumphs of gays and lesbians past and present from transgender DSM sanctioned oppressors extending another of its sticky tentacles, NOW to hetero fetish kinksters!

GAY and Lesbian lives are NOT for sale! They cannot be purchased with a doctor's prescription pad. They cannot be acquired at a needles end. They cannot be crudely carved with a butcher's scalpel.  And no matter the number of liza doolittle lessons, heterosexuals will never walk, talk or BE gay or lesbian.

Ten major signs you are NOT a homosexual man/woman:
Most importantly, if you have to rob from another culture to outfit yourself, you're a fucking fraud. 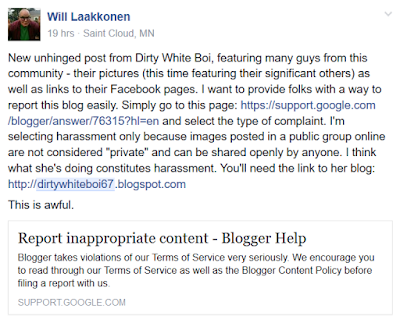 Apparently the rape, robbing and murdering of an entire minority group (gay/lesbian) isnt enough, SILENCING us from verbalising these horrors is paramount.
Posted by dirt at August 28, 2015