The Failure of Everyday Feminism: Masculine Woman-Ignorance or Incongruence?

Sara Alcid, a straight young woman who after having taken a few gender/queer theory/studies courses authored this article in Everyday Feminism which I'll be addressing, called An Actual Answer to ‘Why Is She Dating a Masculine Woman Instead of Just Dating a Guy?’

I'm assuming by the picture Sara used for her article (a woman with short hair and a women's suit jacket) she views masculinity as having something to do with hair length and suits....Hmmm....STRAIGHT away Sara's Judith Butler training is obvious-masculinity is something one performs rather than a product of biology. While I, like most lesbians know, queer has been ripped from our hands and repackaged as any/all straight behaviour that cannot be quantified as vanilla, it is still bloody insulting for STRAIGHT women to use queer (non lesbian) along side lesbian. None-the-less, the ONLY women dating someone masculine between queer women and lesbians is STRAIGHT (queer) women.

Before continuing with Sara's answers, a brief interlude into cis which Sara uses several times in her article. Wiki and other sources tells us this about the term: "Cisgender and cissexual (often abbreviated to simply cis) describe related types of gender identity where individuals' experiences of their own gender match the sex they were assigned at birth". Myself and plenty of other gays, lesbians and straights would easily be exempt from that definition based on societal rules and regulations, while clearly also not being transgendered. Are we a whole other undiscovered breed of humans? No, we in fact are not. Strictly speaking on cis in the way that it is currently being used by trans/queer and the liberal politically correct (not its true meaning and the misogyny behind its current incarnation), cis is poorly thought out and even more poorly applied. Under some misunderstood, delusional or pathological notion that any human who doesnt transition is in complete love, happiness and joy with their body and the narrow norms expected of that body.

Back to Sara's answers:

I suspect Sara is being careful here, by using gender instead of sex. Gender being any whim one may have, using a combination of constructed artificial male/female signifier's in order to bring said whim to some sort of fruition. Masculinity isnt a universe, although those possessing it seem to think they  run it. Masculinity is nothing more than an amalgam of primary and secondary male characteristics, none of which are female. Unless that is, one is so narrow (simple?) minded that they believe male and female to be defined by cultural external markers they're convinced are intrinsic. 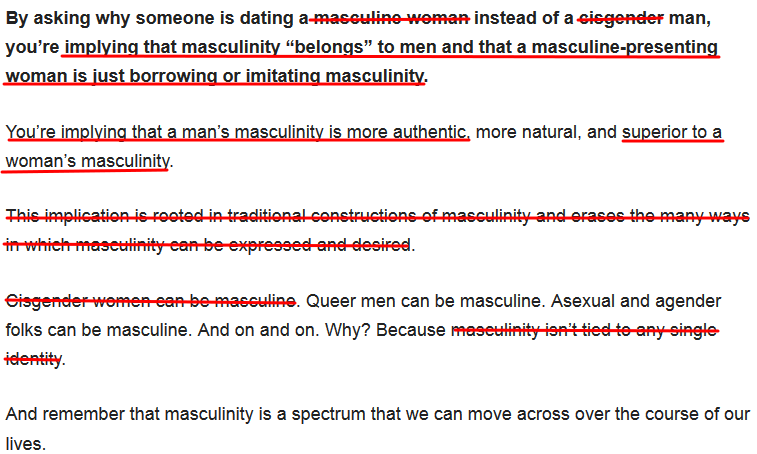 Covered thoroughly above. Moving on... 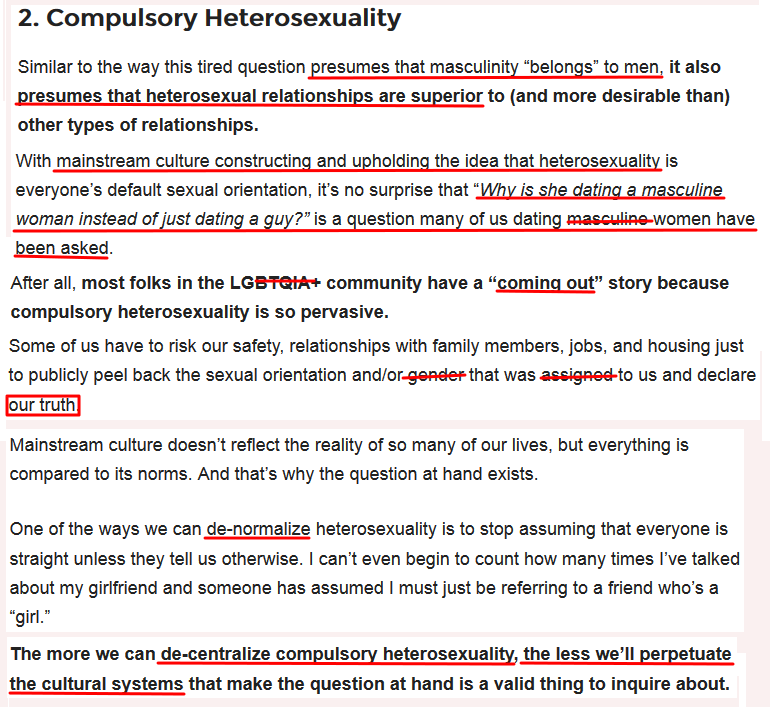 Apparently Sara has also read skimmed her ACR as Plath referred to Adrienne Cecile Rich as. Sara attempts to make a point of heterosexuality being constructed/dominant, yet cannot seem to see the signifiers surrounding male and female are equally constructed. Nor does Sara ask herself why she needs to maintain those signifiers in relation to women or rather because of HER relationships with women. Thats something lesbians who are romantically attracted to lesbians who prefer comfortable pants/shirts and shoes (those constructed signifiers Sara attaches to masculinity in order to alleviate her lezbo dysphoria ) never contemplate. 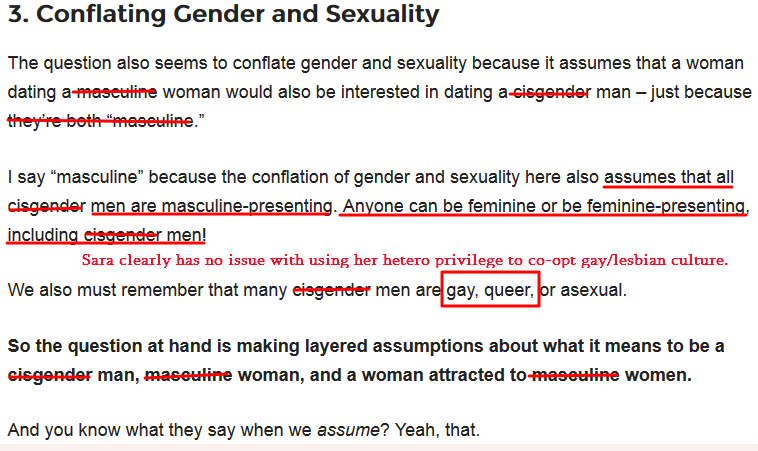 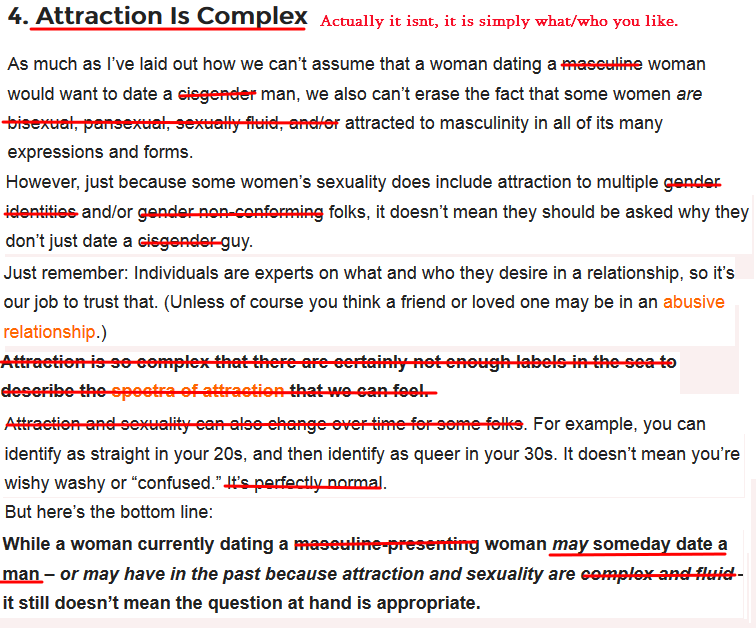 Sara's entire number four was written to excuse her from her married with children hetero near future. 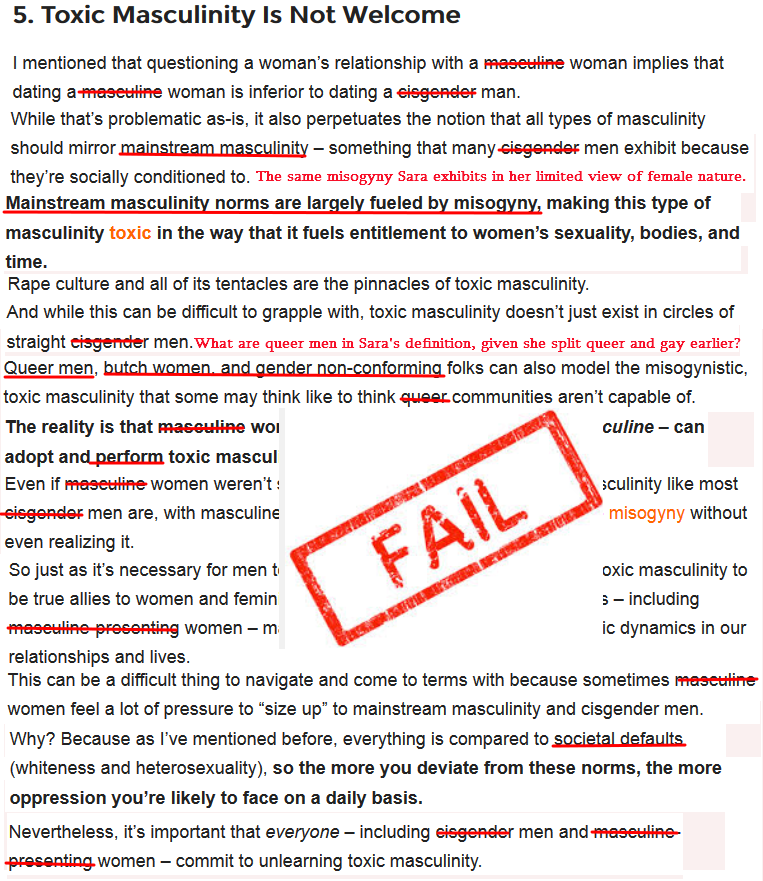 Performing masculinity good, performing toxic masculinity according to Sara bad, but nothing about the unhealthy issues surrounding illegitimate behaviour or the impossibility to perform an actual biological sex. 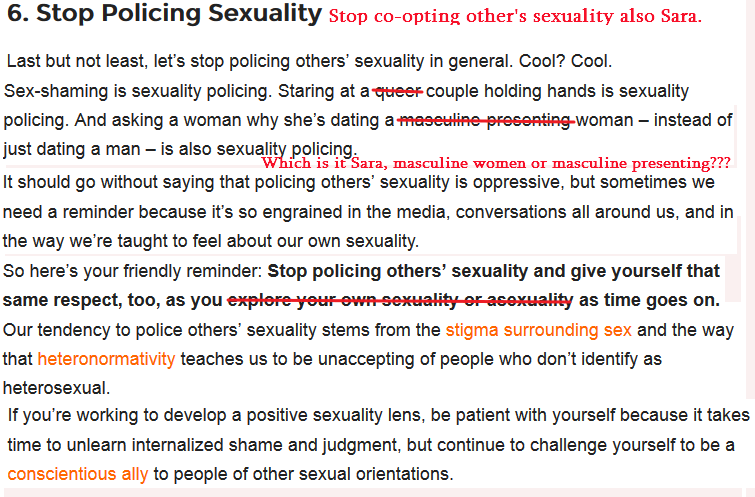 Asking questions isnt policing, even seemingly insulting questions open otherwise closed doors beginning a conversation that could lead to a greater enlightenment or even tolerance.

Sara asked in the title of her article 'Why Is She Dating a Masculine Woman Instead of Just Dating a Guy?’ and through a tangled maze of queer theory and academic speak failed in the whole course of her article to explain or answer.

So why does a lesbian/dyke date another lesbian/dyke instead of dating a male? Because she's a fucking lesbian!