In greater effort to give accurate legitimacy to our lesbian heritage, culture and lesbian norms this blog will more regularly dismantle some of the academic/scholarly buncombe, blurring/confusing/misappropriating/falsifying and committing voluminous willful perversions of lesbian nature/truth.

A little more on Jane to give readers a view of the background Jane has painted before looking directly at Jane's masterpieces themselves.

Jane isnt anymore Femme than her female partner is Butch, furthermore as a Butch solidly and vocal within the VERY minute community of Butch/Femme worldwide I can say with all authority Butches on the whole NEVER call themselves "daddy" be it as a parent OR in the bedroom! Proof being in the puddin as granny used to say, here's a few mouthfuls of proof: 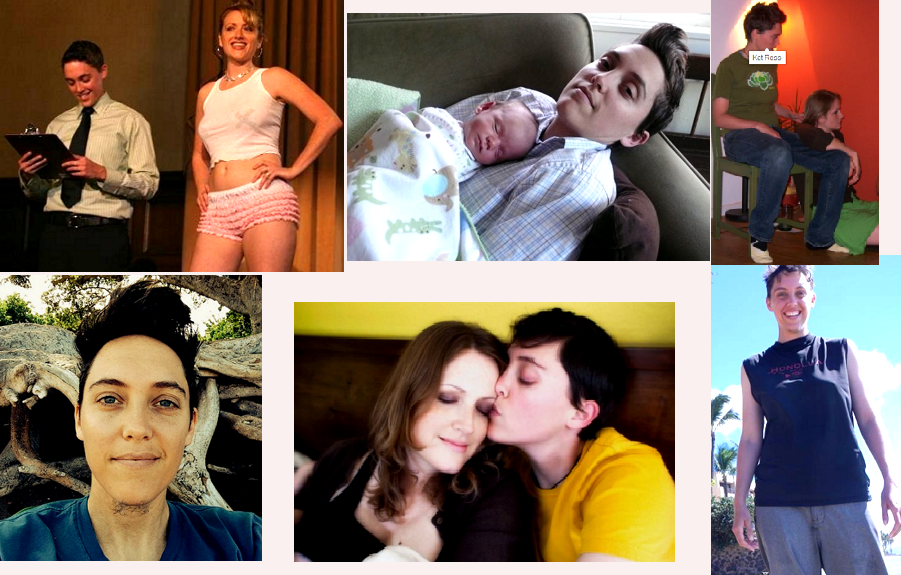 I know, I know right, I too never see Butches sporting ties, ties typically being the quintessential uniform of mid range dykes everywhere, that aside though, clearly NOT Butch. More later on Jane's instant Femme puddin!

Jane teaches that gays and lesbians are not born, but made, while trans bodies are birthed by good Femme parenting and Femme sex work, but I digress. She clearly is under (a rock) the impression she and her woman can raise a child in a genderqueer(less) vacuum.

Should we be concerned for Jane's students when a 2 1/2 has more common sense than she does???? Or should CPS be contacted???? Or both??? Place your votes! 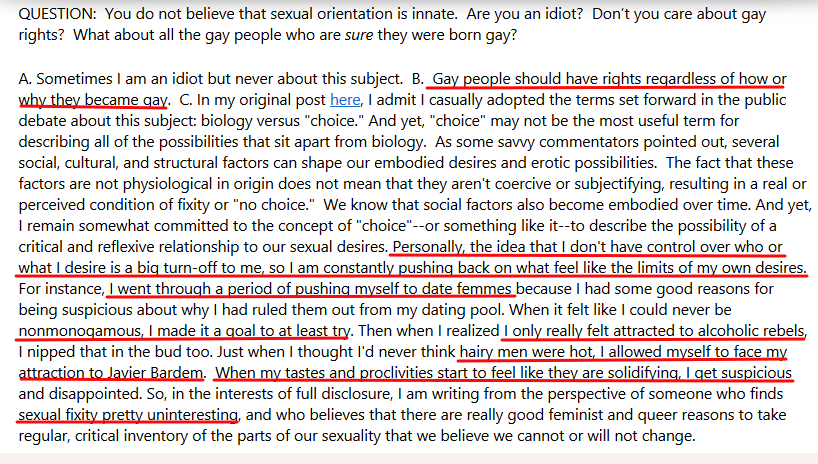 Me thinks not only should Jane take some basic biology lessons from her little boy, and while she is at it maybe for extra credit she could read Heather has Two Mommys! Jane is under either misguided information surrounding basic romantic attraction (gay or straight), has had some serious sexual issues she isnt dealing with or simply talking out of the mouth she shits with. For the life of me I cannot determine as of yet which.

Having a reasonable idea now who Jane is, lets look at one of her PUBLISHED (I know, me either) articles: 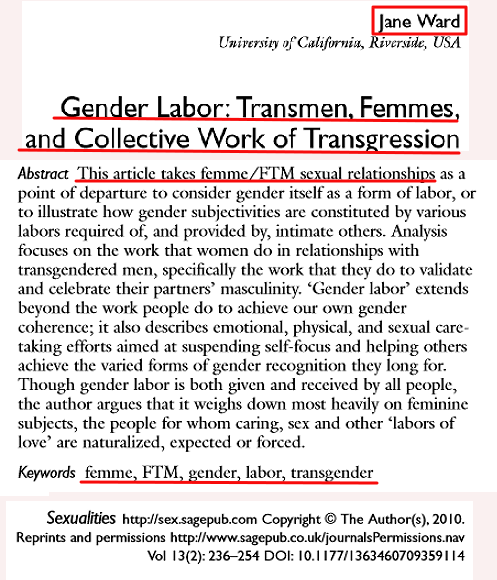 Obviously there is a glaring incongruence in both the title and abstract alone, linking trans females and Femme lesbians together. Given Femme lesbians (remember lesbians are those things Jane doesnt believe exist) are attracted to/partner with Butch lesbians and Butch lesbians rarely transition, coupled with Butches/Femmes being so few, even world wide, Jane's article is off to a rocky start before it even begins! 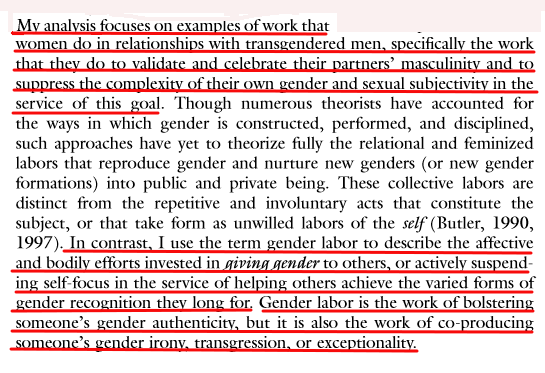 Jane (who calls herself both a Femme and a Feminist bear in mind) seems to have fallen from the pages of a 1950's copy of Lady's Home Journal in her argument that women (Femmes) who date/partner with trans females need not only to butter their bread, BUT be the bread and butter of trans female's chemically created masculinity!

I agree Dykes are, as I have regularly documented here, transitioning in great numbers, BUT how often do you see a Femme dating a dyke??? Jane dating a dyke in a tie doesnt a Butch make anymore than Jane whose sexual proclivities include men, strips her of any self proclaimed Femme identity AND any form of lesbianism!

This passage makes me curious as to how Jane performs her wifely duties for her butch whilst maintaining a full-time job and a child (whom the daddy (gag) butch is responsible for) or in her warped world of constructed post birth biology, is it only Femmes dating trans females who are strapped with Jane's labor rules??? Let me add, Jane advocates female partners of trans females to aid in the dangerous practice of breast binding, as well as injecting trans females with dangerous unstudied hormones. As IF the Femme is doing her man a favour by helping to shovel a few spades of dirt on her early grave. 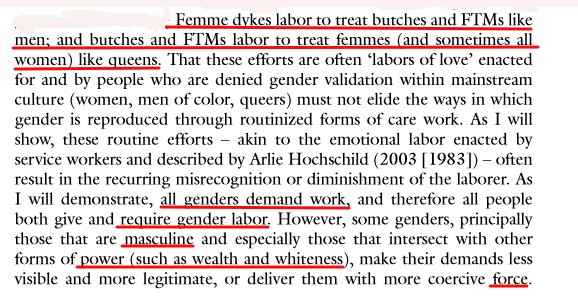 Femme DYKES must treat Butches AND trans females as men and Butches and trans females must treat Femmes like queens???? HUH???? I fail to understand how or why Jane would lump in Butch lesbians with dykes who transition? Butch lesbians have little to nothing in common with dykes before dykes transition and zero in common afterward. Jane's ass clearly is chirping again. Butch lesbians clearly arent men also, nor do we aspire to be men and furthermore name a single Femme on planet Earth (I cant speak for other planets-perhaps Jane has had extra terrestrial dealings, I myself have not) who wants a man, who wants a Butch to be a man or wants a dyke who wants to be a man????? Go on, I dare ya-name one! See told ya you couldnt! 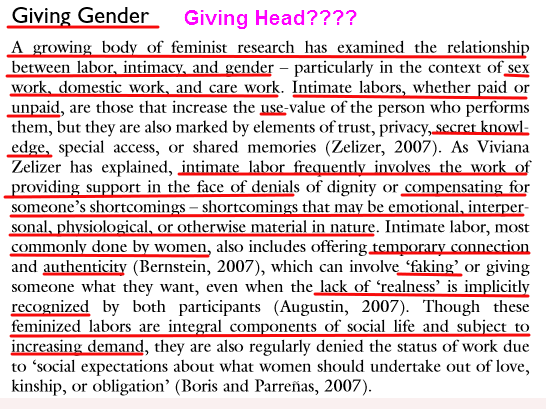 Jane's Femmes are suppose to pretend the trans female is male despite loads of shortcomings such as being female i.e. not possessing a cock and balls, even though Jane's Femmes know better. Jane's version of authenticity include Femme denial, faking, pretending and prostituting all to maintain trans delusions of reality. Sounds like a perfectly healthy relationship to me, NOT! 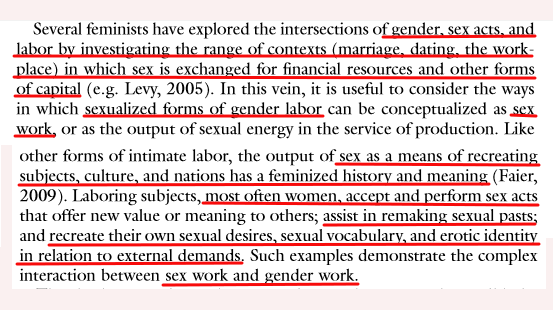 Jane likes sex work, she mentions it repeatedly in this article, far beyond what is cited here. This to me says more about Jane, than any two females in a female/trans female relationship.

Good god! Butch masculinity???? WHA??? Unless a Butch lesbian uses testosterone, Butches do not possess masculine qualities. No masculine qualities equals NO masculinity! Butch lesbians are WOMEN-females with FEMALE BODIES AND BRAINS! Butch lesbians do NOT use dangerous hormones to be Butch, we're born that way. If Butch lesbians do NOT pay exorbitant amounts of money to have their/our tits hacked off and do not use dangerous hormones why in the fuck does Jane keep linking Butches with trans females????? Is Jane as ignorant as she pretends or is Jane invested in perpetuating female masculine illusions/delusions to a larger audience for reasons she wont reveal???? 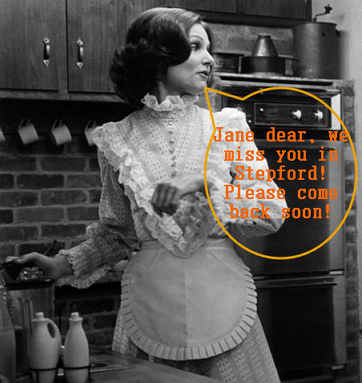 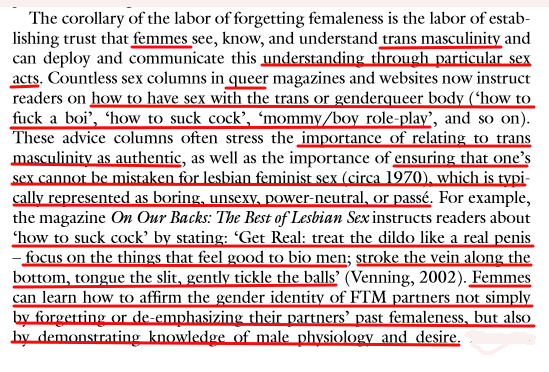 It would be unhealthy enough for a straight woman to take Jane's deluded advice, but jesus H christ, the advice Jane is imparting is aimed at Femmes who are LESBIANS! Why on earth would a lesbian date a trans female? Why would a lesbian pretend a dildo is a penis?? Why would a lesbian want to tickle plastic or any other balls???? (My Femme just said "I want a dick-free/ball-free life!") And moreover why would a trans female want a lesbian partner to give up her lesbian desires/passions and replace them with fake heterosexual ones???? That isnt love, it is sickness.

This paragraph is Jane logic in a nutshell-Femmes according to her are outside of the gender dysphoria spectrum and yet suffering from gender dysphoria themselves!!!! The day that was written a rocker was missing a certain someone!

I will give Jane this, she does acknowledge there is a trans script and in order to partner with someone playing a role, the partner must read from a script themselves. But I must reiterate, how mentally healthy can this kind of relationship be if both parties are faking it as Jane says???? And why would anyone in their right mind TEACH such a seriously unhealthy relationship model??? 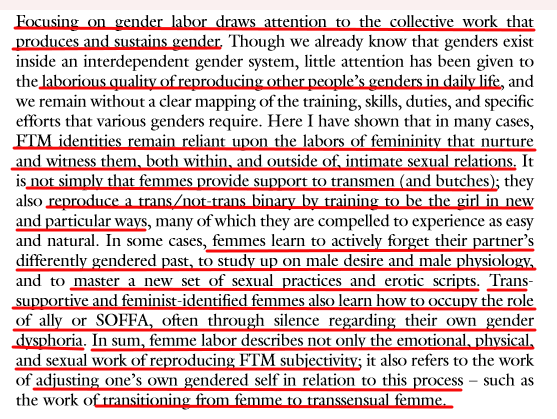 Not only is Jane's mass delusions about Femmes, Butches, Lesbians, Dykes, Heterosexuals, Trans Females, oh hell I dont have all day-mass delusions about everything insulting, her delusions are dangerous. Dangerous to our lesbian youth, dangerous to budding impressionable feminists reading or taking any of her classes and dangerous to women period. Jane is instigating Femmes/women to celebrate masculine identity over their own, taking all women back to the stone age. Jane should crawl out from underneath the rock she is hiding instead of hailing rocks at a minority population she knows nothing about but clearly desires to occupy.