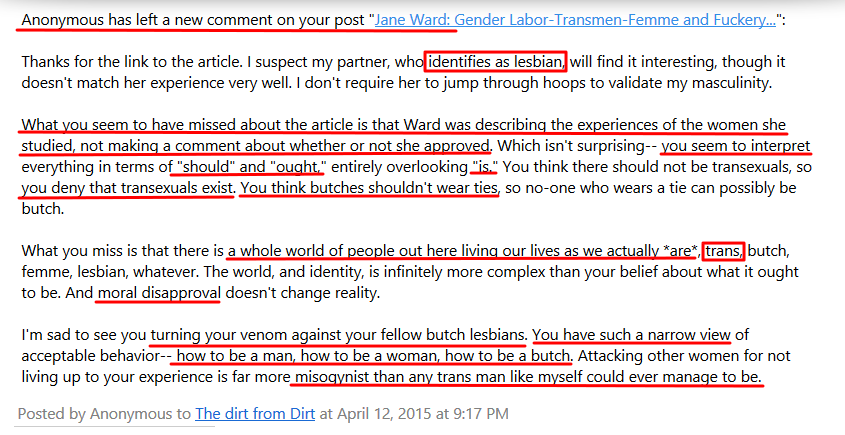 First up Anon, your partner (male or female) may IDENTIFY (your words) as the man on the moon, that in no way, shape or form means when my eyes look up this evening and find the moon, it is your (male or female) partner my gaze will meet. If one IS something, one does not say "I identify as_______" one merely states I'm a lesbian, I'm tall, I'm black, I'm happy.

Next up Anon, Jane Ward does in fact state in the very beginning, she "supported the explosion of transgender identification among dykes" including having dated several herself.

Jane's own admission as a straight woman (queer femme) who supports dykes transitioning because dyke transitioning opened a once closed door. This open door now creating an erotics of  (a) transgender alliance between straight (queer femme) women and trans females, whom straight (queer femme) women like Jane, can now fathom to fuck, so long as both parties play act at a "fake" outdated heterosexual relationship model unhealthy to both parties. Given that Anon, I feel safe in assuming everything written afterward is subjectively JANE WARD!

Lets see, whats next? Right, the should's/ought's and is's....Should/Ought are trans mantras, not mine. You are transferring Anon. I rage against the Gender Straight Jacket. I do not adhere to it with mind and body compromising and jeopardizing Life, Limb and Liberty!

Regarding Jane Ward's girlfriend and her tie, if in doubt about her tweener dyke status check out the various pictures of her. If in doubt about those I chose, google her name Kat Ross. I didnt say there was anything wrong with Kat being a dyke, I merely corrected how she is being incorrectly labeled. Since there are so few Butch lesbians, maybe 5,000ish alive world wide at this given moment, I do understand most humans are clueless as to what we actually look like. So Anon I'll forgive your ignorance on misidentifying dyke Kat as Butch. I do have many posts however on the subject, WITH solid examples if you would like a better knowledge and picture of Butch lesbians.

And last Anon, it isnt venomous to wrest Butch identity back from the sticky post queer theory hands using a blitzkrieg to at first colonize, and then in cookie cutter fashion, mass produce as its own. This sounds like Roland Barthes Myths if you will...."Myth is a second-order semiotic system. It takes an already constituted sign and turns it into a signifier"...."Myth is a metalanguage. It turns language into a means to speak about itself. However, it does this in a repressive way, concealing the construction of signs"...."Myths differ from other kinds of signifiers.  For one thing, they are never arbitrary.  They always contain some kind of analogy which motivates them.  In contrast to ideas of false consciousness, myths don’t hide anything.  Instead, myths inflect or distort particular images or signs to carry a particular meaning.  Myth doesn’t hide things, it distorts them.  It alienates the history of the sign". So while you may not like Anon, that I hold up (and AM) the historical sign, i.e. a Butch lesbian, doing so isnt "venomous" it is an act of love and pride. Pride in myself and love for all Butches, past, present, lost, and future (if..IF we are allowed to be born). Jane Ward and the likes are clearly invested in aborting us post birth.

As to any narrowness on my part, again Anon, you are transferring. There is no particular way to be a male or female unless YOU buy into the Gender Straight Jacket, the GSJ dictating transition itself. Interesting though you admit trans females like yourself are misogynistic. Hmmm....