The Dyke population is not only the LARGEST population of lesbians in the world, they are also the most visible in both TV/Film/News and the general public/lesbian events. A few of the more popular examples of dyke: 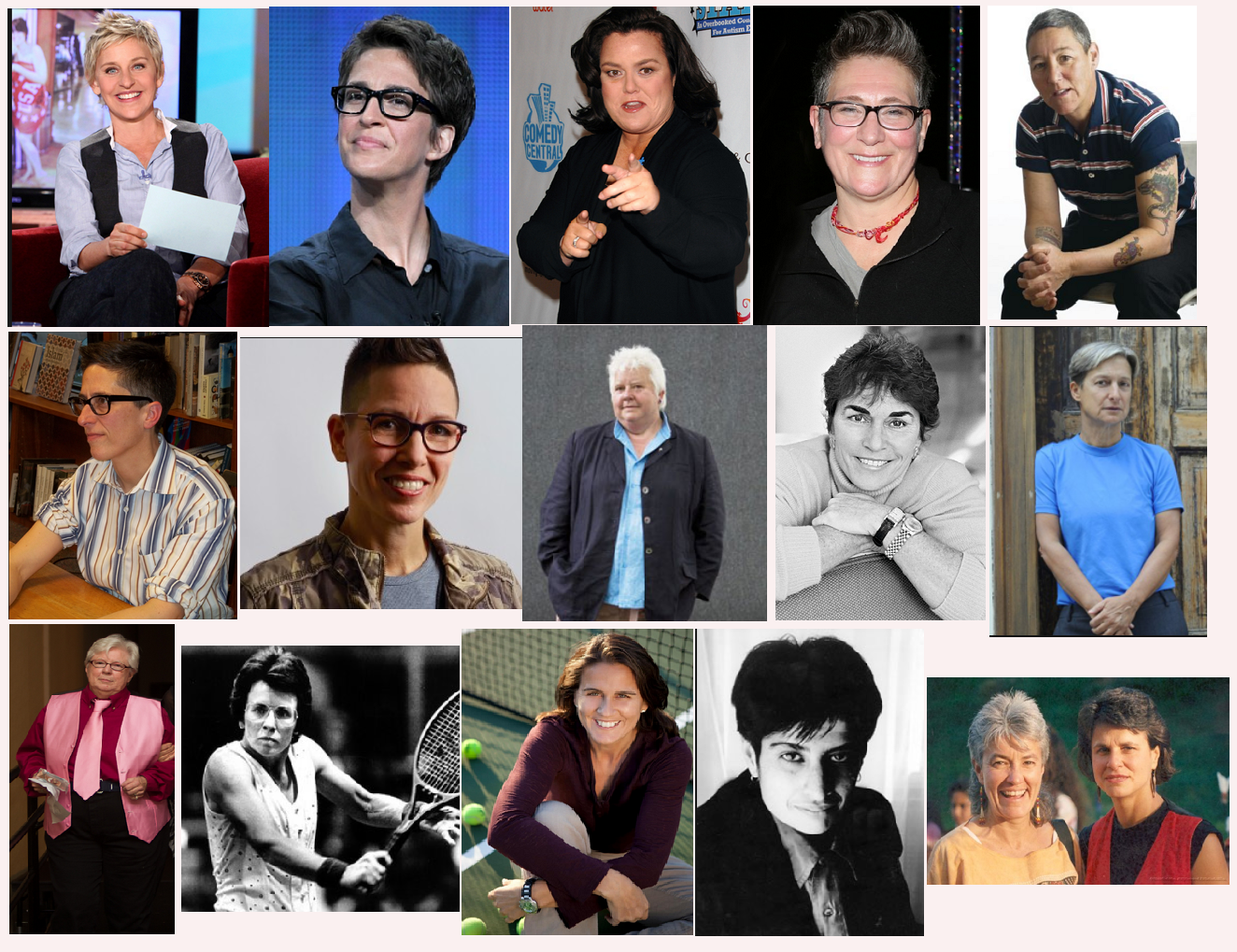 Dykes range like the dyke collage above, from smart, attractive, sporty, intelligent, passionate, prideful, talented, musical to name but a few positives gracing dyke populations everywhere. For all intents and purposes our most well known dykes and many in our home dyke communities are something to aspire to. It has long been in admiration myself for many of these dykes that has long puzzled me in seeing so very many dykes through the years desperately trying to reach for some imagined attainable Butch-hood always beyond their reach. Not satisfied with their own uniqueness, dykes have a continued history of innocently mislabeling themselves as Butch or labeling themselves as Butch with Malice Aforethought.

I can remember as a baby Butch (pre internet) with hope in my heart trying to find any information I could about Butch lesbians after I had first heard the word and felt for the first time there were other girls like me. I can also remember the disappointment each time I hunted down a butch artist or actor or writer. Disappointed because their experiences, stories and lives outside of female attraction I shared nothing in common with. I can acutely recall after running across Lee Lynch's name, a "butch author writing about butch lives and loves." I couldnt wait to read her!

Imagine my surprise (am I channeling Holly Near) and shock opening the two Lee Lynch novels I had purchased at my local Lesbian bookstore? (Yes, once upon a time not only did bookstores exist, so to did lesbian/feminist owned and operated ones.) But I digress, instead of a shiny mirror where I expected to see myself through other women like me, what I saw was a story of men and women where the men had been replaced by some unrecognizable thing called butch. The situations, actions, interactions and romances between the female characters mirrored that of straight society right down to the little ladies and darlins tossed from the lips of butches where they treated delicate femmes like China dolls.

This butch dyke world no matter what direction I looked, history/book/music/pridefest or sport, none reflected my Butch interior/exterior, life, loves or desires. Transitioning from the written word to the real only proved more troublesome. Dykes either looked straight through me, sir'd me or wanted to be "butch buddies." In the decades since I've learned that as a Butch my observations/experiences with dykes were the norm rather than the exception.

But it wasnt until the internet age that I realized just how prevalent dyke envy and their colonization of Butch identity was. I also realized how misconstrued, misunderstood and misconceived dykes were portraying Butch. The butch that dykes were acting out on the big screen of their lives resembled biological men more than they ever resembled Butch women. But worse than these gross caricatures of Butch by dykes using our name, were these B movie renditions of Butch sold to willing movie goers as Hollywood true stories!

But the REAL story is:
And FAR too many other subtle erred Butch depictions, portrayals and presumptions to list.
Chances are if you see a lesbian performing male, she isnt Butch, she's a DYKE! Dykes imitating men dont a Butch make! Say it with me...

Not being a Butch lesbian isnt an insult. Being a dyke of any variety isnt an insult. All are nuances of nature. But not being true to your own unique nuance is a crime against nature, yourself and us all. It is normal in childhood to pretend to be someone you admire, in adulthood it is dysfunctional.