Yesterday morning I awoke to a statement in my inbox from Lisa Vogel/Michfest leaders. Since the statement is in five parts I have broken down all five and will address each part individually. There is a little background information, but it will become apparent for those who arent aware of it. 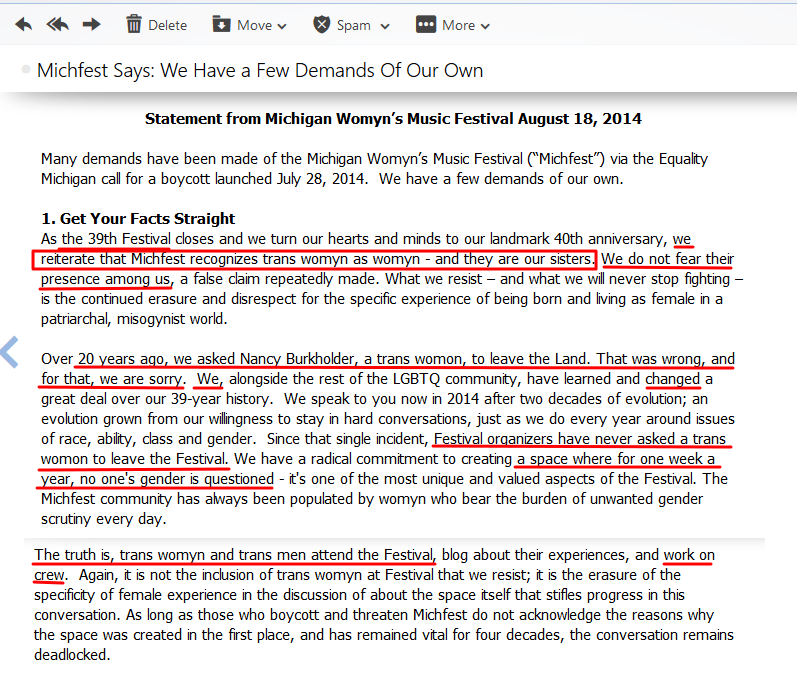 Michfest leaders claim trans males are now not only welcome at Michfest, trans males are "our sisters!" In this new we-welcome-men-policy, Michfest leaders dare to speak for ALL lesbian attendees and lesbian supporters since Michfest began in 1976! No male is MY sister! And men who fetishize woman to the point of masturbatory pathology while contorting himself to squeeze into the hyper femininity HE holds near and dear is NO female's sister!!! The same hyper femininity HE requires for HIS masturbatory drug addled highs is the very same hyper femininity behind most every female eating disorder, depression, insecurity, pathological fears, plastic surgeries, a fare share of rapes, sexualization and prostitution of female children, far too many suicides and far far far too many other pathologies preying on females everywhere and every second of every fucking day!

These are the dirty vile secrets Michfest leaders didnt mention in their kiss-trans-male-ass statement. Their statement leads lesbians to believe these men are our sisters because they once were our brothers, as in gay men. The trans males who've been to Michfeast and who will undoubtedly flock to Michfest 2015 now that they are all invited, are NOT gay men! They are males who get erections from putting on clothing deemed girls/women's, beginning usually with their mothers or sisters. Transition only fuels their sexual highs and gaining entrance (rape?) into girls or women's private spaces is the ultimate in sexual highs for them. These are the trans males Michfest leaders our saying are now our lesbian sisters! I suggest if Michfest leaders feel so strongly about this and comfortable with trans males, they should invite these trans male sisters to stay with them while in Michigan! 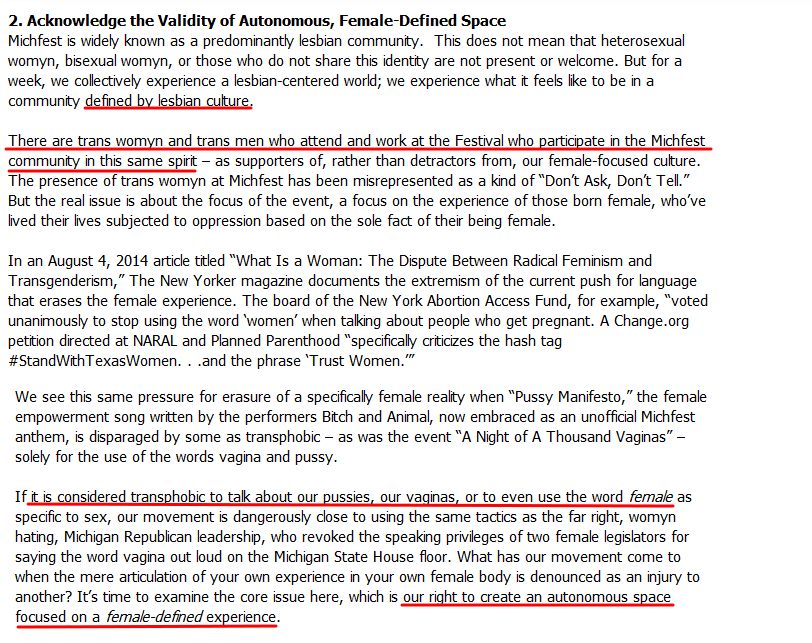 Part two of their statement gets conveniently murky. Michfest leaders state Michfest has largely been defined by lesbian culture, yet in the same breath brag about all the trans males and trans females who attend fest and even work at fest. They then jump to the problem of trans males at fest and in general, by highlighting examples of how the Trans Politic is legally making it illegal to be/experience being a biological female. They end this part of the statement by declaring the importance of creating a space, like Michfest which upholds female defined experiences! Umm WHAT?!!! Lets invite males to Michfest, lets call grown heterosexual men our sisters, and lets expect those same white privileged hetero-patriarchal men to mind their P and Qs while the women folk talk about our pussys! I wasnt aware trans males cast off their patriarchal misogynistic dominant attitudes into designated waste baskets before entering the gates.

This I found personally insulting and painful to read in the fucking extreme! Suddenly Michfest leaders have adopted the DSM's pathologically disordered lingo to describe a dyke or a Butch dyke. There is NOTHING gender non conforming in being a dyke or a Butch dyke! We're female, and we conform to our biology! Living and breathing outside the Gender Straight Jacket doesnt suddenly mean we arent 1000% female! I can only assume Michfest leaders too think dykes or Butch dykes arent real women. Not surprising given they support transition, which we know began and continues as a means to eradicate gays and lesbians, now even as children. None the less, its still painful to read, worse as a Michigander myself and a lesbian. 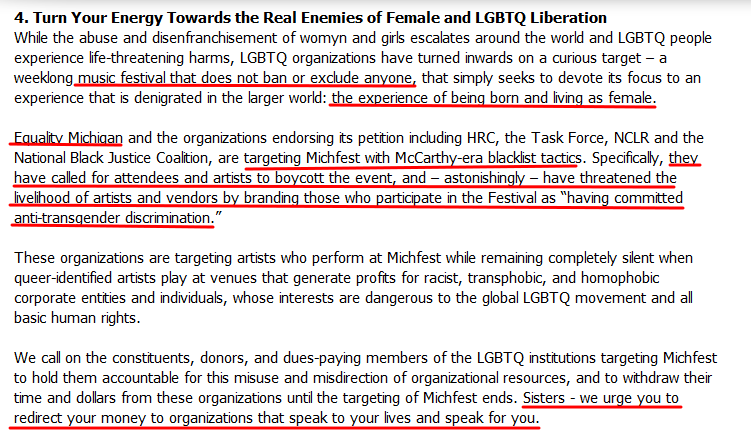 In this piece of the statement, we find out the back info which is the reason for the statement itself AND precisely what the NOW trans male inclusion is all about. Michfest uses again their murky slight of hand to say Michfest will not exclude anyone BUT they will continue to focus on shared female experiences. This is stated to appease ALL attendees and possible attendees they are hoping to gain in the coming years. A public boycott was issued against Michfest last month by Equality Michigan.   EM publicly stated to Michfest leaders that they are committed to telling "our communities, festival organizers, festival vendors, and artists" to boycott Michfest "until this policy is modernized". Now post Michfest 2014 which had a nearly all time low attendance (past years 7500 women-now a few thousand) and suddenly Michfest leaders are welcoming men with open arms and open legs! Well your legs, not theirs. Michfest leaders even go so far as to employ scare tactical pressures aimed at attendees to come to Michfest or all the artists who perform there might starve! We are to believe that if an artist doesnt perform a once a year gig at Michfest they will wind up in some gutter somewhere next to the down and outs, drug addicts and winos! What is most disgusting about this scare tactic is it is MOST patriarchal and misogynistic! Women in our every day lives are guilted all day long and this once a year Michfest experience is suppose to be the place we no longer have to feel patriarchal guilt pressures and then here are Michfest leaders doing the very same fucking thing they're telling us to come to them to momentarily suspend! 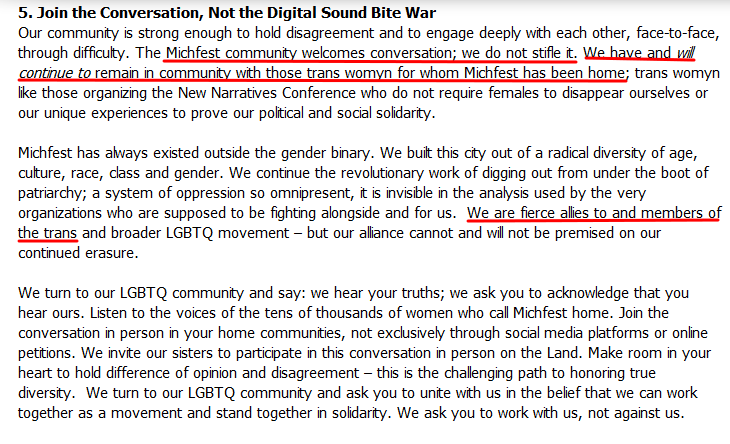 There are two blatant messages to come away with after reading this Michfest statement in its entirety: 1) Michfest no longer has a women-born-woman policy. Men are now welcome. Any women calling herself a man and any man no matter his intact body, sexual criminal history is now welcome at Michfest if he simply calls himself womon. 2) Michfest leaders sold girls/women like common whores to the almighty misogynistic patriarchal dollar. There is an unwritten third message to the trans males, you arent truly wanted or accepted, but Michfest leaders WILL take your money! Be sure guys to tips well for services rendered.

While I do not agree with the reasons EM petitioned a boycott of Michfest, I most strongly support lesbians boycott all future Michfest festivals! Michfest leaders stressed to attendees (sisters) to be mindful of where your money goes. I urge this as well. And remember next year when contemplating attending Michfest, your money supports: 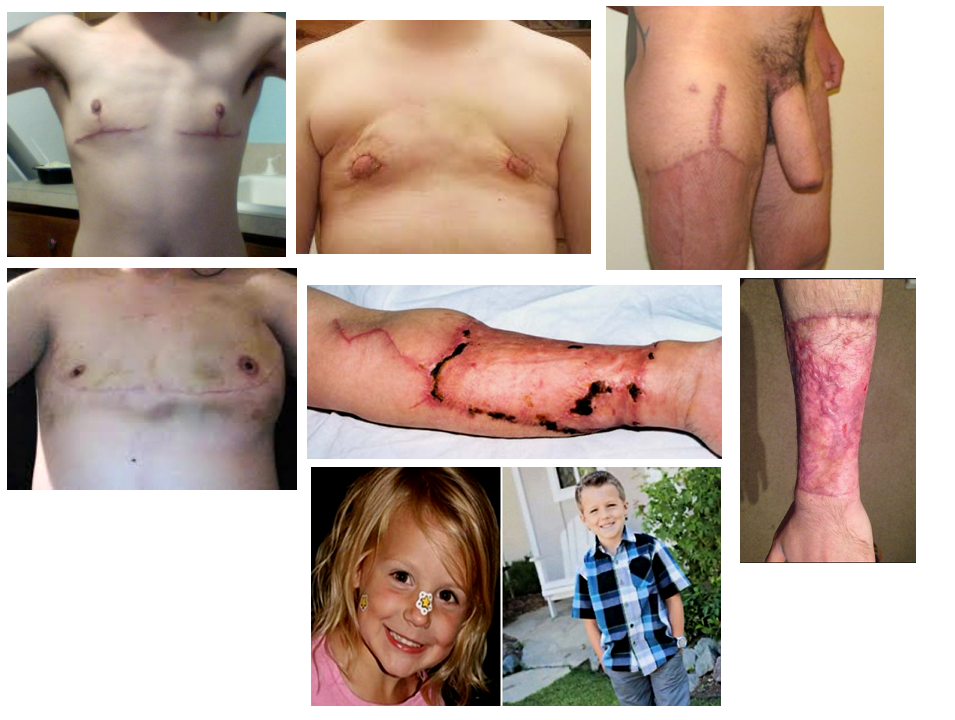 Any lesbian attending Michfest will support the brutalizing misogyny of female transition, and worse pathologizing (non gender conforming) the normal behaviour of baby dykes who are now being transitioned in childhood for a future where dykes will not only NOT be attending Michfest festivals, we will no longer exist period!

I wonder what the 19 year old Lisa Vogel would think of all this.