In the last several decades world population statistics estimate that between China and India alone approximately 200 million females are missing from the planet due to sex selective abortions. Before the technological advancement of ultra sounds made knowing the sex of a fetus possible, post birth abortions of female babies existed in varying forms of murder, slightly skewing male/female ratios. But with the advancement of the ultra sound, aborted female fetus's flourished and continue to sky rocket today, primarily in China and India but also in countries all over the world.

The simple yet not so simple reason for these horrifying statistics is misogyny-the systematic hatred of females that has proliferated under all patriarchal structures and is the prime requirement to maintain (hetero) male domination. Misogyny is also the foundation for homophobia. Homosexual nature/behaviours was/is viewed as a subversive act under patriarchy. The stereotypical gay male continues to be portrayed as effeminate/womanly and man loving and the stereotypical lesbian continues to be portrayed as mannish/aggressive and man hating. Both stereotypes threaten hetero patriarchy and both have long been punished and abused in all patriarchal societies. The hatred, punishment and criminalization of homosexuals/homosexual behaviour dates back to biblical times.

Gay and lesbians were among those confined to early mental asylums and later mental institutions receiving extreme forms of punishment and torture to alter or halt homosexual behaviour.

"At Atascadero State Hospital, doctors (I use that term loosely) were permitted under an obscure California law to commit those who practiced sodomy into the hospital. Once admitted, normal men and women were rendered mentally disabled through the torture of castration, lobotomies, forced chemical treatments and experimental treatments. The horrors experienced by hundreds are almost too hard to comprehend in America.

The most notorious was a Dr. Walter J. Freeman who perfected the ice pick lobotomy. He jammed an ice pick through a homosexual's eyes into the brain and performed a primitive lobotomy. According to records, he treated over 4,000 patients this way around America and it is estimated that nearly 30% to 40% were homosexuals. He believed deeply this was the only way to cure homosexuality".
But long before Freeman's ice pick, homosexuals were being diagnosed, decriminalized, medicalized and experimented on in effort to cure them of their same sex attractions.

"...noted German physician Karl Westphal (1833-1890), who in 1869 published an article describing the cases of an effeminate male and a masculine female with same-sex attraction. He called the condition "contrary sexual sensation" and claimed it was congenital. As such, he argued, it should come under psychiatric care rather then legal prosecution".


"Westphal's diagnosis was rendered into Italian by forensic expert Arrigo Tamassia as "inversion of the sexual instinct" (1878). The celebrated French neurologist Jean Martin Charcot (1825-1993) rendered it into French in 1882 as "inversion of the genital sense" in an article describing a variety of "sexual perversions" including inversion and fetishism".


It was in 1882 under Charcot that homosexuality and cross dressers/female fetishizers were first joined together by psychiatry and remain siamese twins in all forms of the DSM even today. It is this joining of male cross dressers/trans males with gays and lesbians in the late 1800s that cemented the gay and lesbian genocide future gay and lesbian children are facing now.

"The notion of sexual inversion continued to dominate medical thinking about homosexuality into the twentieth century as biomedical researchers employed the latest techniques to uncover its biological basis. Even before sex hormones were discovered, homosexuals were hypothesized to be neuro-endocrinological hermaphrodites. This was the preferred hypothesis of German sexologist Magnus Hirschfeld (1868-1935)". "Hirschfeld was also a pioneer in writing about transsexualism and transvestism". "Although Hirschfeld did not advocate attempts to cure homosexuality, he was impressed with the research of endocrinologist Eugen Steinach (1861-1944) on altering the sexual characteristics of rats through castration or testes implants". 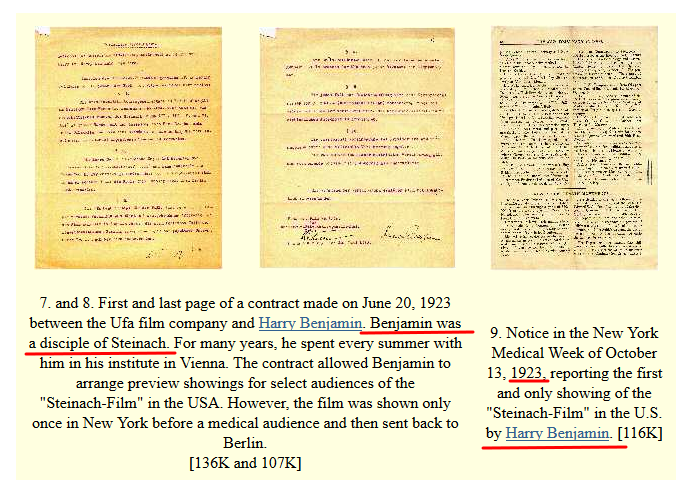 As can be read here, Harry Benjamin the father of transgenderism as we know it was a disciple of Steinach, only Benjamin decided to experiment on human rats instead. Since homosexual behaviour could not be changed as it IS innate, Benjamin and similar doKtors decided to change the body to fit the brain to fit society's strict hetero behavioural gender codes.

Hetero males who become female fetishizers do not begin fetishizing womens clothing until they are around the age of puberty and so remain safe from being transitioned in early childhood. It is the gays and lesbians who challenge gender norms in early childhood that are the targets for childhood transition.

In the USA there are an estimated 314 million people. Were gay and lesbian children transitioned since mid 20th century here are some educated guesstimates on the number of gays and lesbians aborted post birth via transition:

Ten percent is often used as a guesstimate on how much of any given percent of the population is gay/lesbian. I'm going to use twelve percent for my figures as a more accurate guesstimate to account for those in the closet. Using that 12% tells us about 37.7 million people in the USA are gay/lesbian. Half of that, 18.8 million are gay and 18.8 million are lesbian. Guesstimating that at least 2% of the 18.8 million of gay males are effeminate and 3% of the 18.8 million lesbians are Butch/strongly tomboy. That 2% (380,000 gay males) and that 3% (560,000 lesbians) are those most likely to have been targeted and transitioned. NOT because they were born in the wrong body, BUT because their behaviour transgressed hetero patriarchal gender norms! Even if we low ball the most likely parents who would transition their child to homophobes to a mere 1%, that would still be 9,440‏ gays and lesbians that would have been transitioned to cure them of homosexual behaviour.

Until gays and lesbians can be identified pre birth, efforts to abort them must occur POST birth through recent legitimization of transitioning children. If we use similar math to the statistics above only using current birth rates, that is actually using births of children who may actually be affected by Post birth transition abortion this is what the numbers will look like:

The mental/medical community has a LONG history of trying to rid the world of gays and lesbians. We have been put into the worst mental asylums simply for falling in love, we have been hated, criminalized, tortured, mutilated, shamed, ostracized and carved into the notion's of what we should be. But none of that has been enough to eradicate us on large scales, until now. The 200 million missing females from China and India took decades to accumulate, but systematic abortive efforts ensured the femicide in those countries. A mere 120 gay and lesbian kids transitioned a year doesnt sound like a huge number. But neither did the first 120 aborted female fetuses that now number over 200 MILLION and growing!

Bear in mind, these number are ONLY from the US, children are being transitioned world wide.