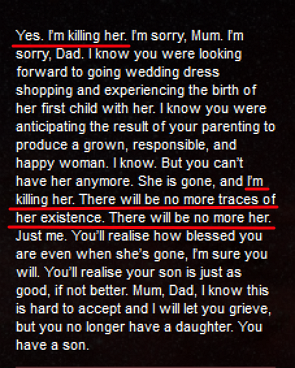 This screencap comes to us via this tumblr, a young woman's angry, miserable and sad "ftM journey".

Like EVERY female transition before and after her, her journey begins with a deep hatred of the circumscribed role/expectation of girl/woman, viewed everywhere she looks. A view she also cannot identify with. A hatred that over time is internalized to such a degree, trans females want to erase all "traces" of female from their body. And by traces, meaning any visible signs of female emphasized by males/the Male Gaze, that illustrate softness, sex or weakness. In other words, anything that isnt visibly male or manly.

As I have been writing here for years, transition is a form of murder, a living death. And the violence of transition, regardless of whether transitioning toward female or away from her, IS its own form of Violence Against Women! Woman isnt something we can violently cut ourselves into, anymore than she is something was can violently cut from ourselves.