The info bellow is from a small French study on bottom surgery. Some things to keep in mind while reading the study results:

Now onto the study:

We analysed retrospectively 56 (female) transsexuals who had a phalloplasty using a radial forearm free-flap in our department from 1986 to 2002.

The mean follow up was 110 months; 53 of the 56 patients (95%) currently have a neophallus, after a mean of six surgical procedures.

There were flap complications in 14 patients.

Three flaps were lost, with one each due to early haematoma, cellulitis and late arterial thrombosis

There were prosthesis complications in 11 of 38 patients.

Seven of 19 patients who had a urethroplasty presented with complex strictures and fistulae that led to perineal urethrostomy.

Our study shows that phalloplasty with a forearm free-flap leads to good results in term of flap survival and patient satisfaction. However, there was a high rate of complications. Patients must be clearly informed that the procedure can seldom be achieved in one stage.


The mean (range) follow up was 110 (11–204) months; one patient died at 120 months from acute myocardial infarction. The mean hospital stay was 20.2 days and the mean number of procedures per patient was 6 (2–24), which included implantation of the penile prosthesis as well as surgical management of complications (e.g. urethral strictures dilatation) under local or general anaesthesia. The complications are detailed in Table 1. We separately assessed flap complications and urethral or prosthesis complications. The flap survival rate was 95%, as two flaps were lost soon after surgery (one compressive haematoma and one cellulitis) and one was lost 7 weeks after surgery, secondary to venous thrombosis. There was also one cephalic vein thrombosis treated with heparin, antiplatelet adhesion drugs and leeches, and one arterial thrombosis which required a repeat anastomosis using the contralateral inferior epigastric artery.

Among the 19 patients who had a urethroplasty because they wished it, seven (37%) had a subsequent urinary fistula, with unsuccessful conservative treatment, that finally required a perineal urethrostomy, a mean of 72 months after phalloplasty. Eight (42%) other patients with a urinary fistula were treated conservatively, either surgically or with prolonged catheterization. The four (21%) remaining patients only had auto-dilatation of the urethra to improve their voiding condition, in the first months after the initial surgery.

Only five (9%) had obvious erogenous sensitivity when touching their phalloplasty.

Despite the high morbidity there was a high (90%) satisfaction rate in the present study. These apparently contradictory results might be explained by the strong motivation of the patients.

That is the study in a nutshell, see link for complete results.

Besides the minute number of patients in the study, I also find lacking any mention of the brutal destruction and scarring of the forearm. That aside, it is clear from this study that these women are so ashamed of their sex, so ashamed of their vagina's that they are willing to endure multiple savage surgeries with horrific results, results they are willing to be satisfied with so long as they hide their true female anatomy. 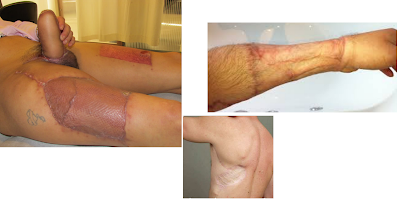 Women have LONG been expected to be satisfied with their/our horribly circumscribed, raped, battered, abused, unhappy and unfulfilled lives. The results in this study have been made from centuries of misogyny, misogyny so extreme and female self hatred so bloody internalized, the above can be self viewed as satisfying.