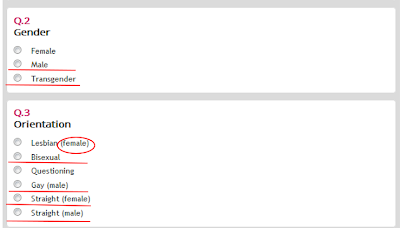 The above is a screencap of the second and third question from a LESBIAN sex survey by SheWired,
a supposed LESBIAN website. I do not know what I am more appalled with, that a site and survey claiming to be about LESBIANS would unashamedly include male/trans as possible "genders" not to mention anything other than LESBIAN as a sexual orientation on a fucking LESBIAN sex survey!!!! Then to go that extra fucking kick in the cunt and actually put (female) next to LESBIAN. The very nature of lesbianism IS FEMALE!!! A FEMALE romantically/emotionally/sexually attracted to other FEMALES who are romantically/emotionally/sexually attracted to other FEMALES!!! Or more appalled at the complete silence from lesbians not calling this clearly NON-LESBIAN site/survey out!

Has the autogynephilic threat become so great that lesbians are so fearful of insulting the almighty  frocked male that they are willingly allowing biological men to co-opt there/our so beautiful, precious identity??