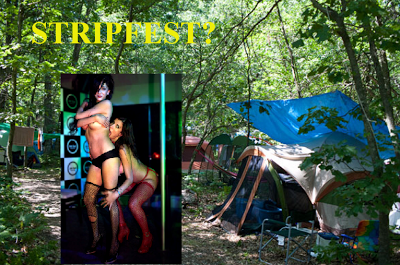 Michfest's once upon a time, woman safe, idyllic grounds has slowly, post queer movement, become less idyllic and drastically unsafe for lesbians. The queer movement, in line with the hetero patriarchal Trans Politic has invaded Michfest's lush lands, kicking open the door for the Male Gaze that Michfest once kept out. Queer women, i.e. straight women with a slice or two of kink, continue whittling away at all traces of lesbianism Michfest was built by and upon. Paving the way, like a MAN-made highway for more and more male presences on Michfest grounds.

These women have been so infused with patriarchy and so defeated by their own internalized misogyny, performing for the Male Gaze is second nature and protecting men, regardless of garb, their first! So allowing, NO-correction, demanding, demonstrating that males belong on Michfest's once safe, Male Gaze protected lesbian lands is meaningless to them. Their ears are deaf to lesbian pleas for women only spaces and no Michfest signer can enlighten them to a world where they need not seek male approval for their existence.

Michfest was created as a safe haven, a shelter from the Male Gaze. Where lesbians could walk hand in hand, bare chested if they so wished. And many did/do. To have the privilege of feeling the sun on their backs or breast without being ogled by males, without the threat of rape and without shame. This privilege is being quickly eroded at Michfest, with queer women leading the pack! Women who ignorantly welcome the Male Gaze because they have nothing else inside. And a wink or a nod or a hoot from a trans male goes a LONG way when your existence depends men. And the trans males raping Michfest grounds with their testosteroned presences are using Michfest as their very own strip club!

But it is one thing if queer straight women wanna show their tits to men, quite another when unsuspecting lesbians are faced with the Male Gaze at a WOMAN ONLY event. It takes only a single male to carry the whole misogynistic Male Gaze history with him, that gaze is in his every look, glance and step. Lesbian shirtlessness is no longer a Michfest privilege when hundreds of male eyes are upon our bare breast. It is a strip tease without our permission, when Michfest became Stripfest.