A Trans group in AZ is trying to fight a Bill (bill 1432, which is trying to criminalize trans males (primarily) from using female bathrooms and other private areas, the bill does extend to both sexes. Bill below:

Basically, if a trans male or female is clocked while in the Ladies/Mens, they can be asked to show Birth ID, and if their disorder sex does not match their real sex, they can be criminalized. Clearly this bill was designed to keep males (however they're dressed) from gaining access to women's private areas. Because once autogynephiles have their genitals butchered beyond use, rendering their masturbatory highs defunct, they count on these trans excursions for their mental trans highs.

As a Butch woman who has been physically removed from her share of lady's rooms, who has had her share of snide remarks from other women in the lady's room, has had managers called in, has had women walk in, look at me and walk back out to check the sign on the door to verify that they were in fact in the right bathroom or not come back at all. In short, the public lady's has always been a source of pain, shame and embarrassment for me. I can stand tall against any man, fearless even, but having to use a public toilet? I'm reduced to nothing. Powerless. I've had nieces as young as 6 or 7 years old stand up for me when adult women say something smart or something about their being a "man" in the ladies. My little little nieces will yell at the tops of their lungs "SHE'S A GIRL"! If out with family and I have to go to the bathroom, the adult females there will always go with or tell one of the female children to "go to the bathroom with aunt lynn". But despite all the hassle, I get it and I understand it. These experiences are partly due to the Gender Straight Jacket, partly due to Butch Invisibility, but 99.9999999999% because we as women live in a rape culture. A culture in which the threat of rape is so ever-present that women cannot afford to let even one of the bastards (males) in. This is why I accept the hassles and why laws should be put in place to keep actual males out.

pisses me off to no fucking end! The trans community trying to tell me as a Butch woman how these laws are going to hurt me? Fuck you! Butch lesbians are 1000% woman! Carrying our female bodies in ways that are outside the Gender Straight Jacket isnt "non conforming"! Its bloody NATURAL! The ONLY thing "non conforming" is the hyper femininity to which these autogynephiles strive for full masturbatory pleasure!!! So until I see this community using its numbers to stop rape rather than reinforce it, keep your fucking lips off my nature!

This AZ Trans group has hatched several plans of action in order to quash the 1432 bill, all at the expense of gays and lesbians.

They have selected five trans females who resemble men the most, to enter the public ladies room in effort of frightening any women using the bathroom at that time. Their hope is that by instilling RAPE fears into the women who might be occupying the bathroom at the time, they will force MALE lawmakers to consider that it could be their "wives and daughters" coming into contact with "transmen" in bathrooms, locker room showers etc. Given that on a busy afternoon in a public place, the bathroom might have at a minimum, 5 or 6 women. Given that on average 1 in 6 women are raped. And given in AZ which has a high American Indian population where around 1 in 3 are raped, you can bet your bottom dollar that when this little stunt is pulled, at least 1 woman in that bathroom will have been the victim of rape by a man! So not ONLY is this group using rape culture fear to make a point, it is also doing so at the expense of women who HAVE been RAPED!!! And this is no internet picture with a "trigger" warning, this is REAL life!

They fail to see how this could seriously harm a rape victim and they clearly fail to see what this stunt is really saying to the public. It says that men who look like men, women who look like men or hell emo girls in hoodies cannot be trusted in the private areas of women/girls because all of the above have the potential for raping women!!! Meaning, the Trans community is saying that Butch lesbians are likely to rape women, females on testosterone are likely to rape women and men looking like men are likely to rape women. Therefore ONLY girls and women who are bound and gagged by the Gender Straight Jacket AND MEN who adopt high femininity should be allowed in women's private area's because of course only they can be trusted to be around females without the threat of rape.

But why stop there, right? Well this group doesnt. The next screencap is from the minutes of a recent SAGA meeting... 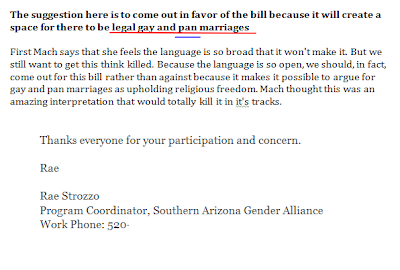 They are going to try and link gay marriage to group marriage in order to quash this bill also, with zero thought on how this linking would affect gay marriage in the long run. Every fucking gay person and his or her brother has heard for decades from the religious right that once they allow gays and lesbians to marry the next thing will be us wanting to marry animals. By linking group sex/marriage to loving gay and lesbian relationships, it brings these long held ignorant beliefs back to the surface, thereby throwing away any chance gays and lesbians have of legal marriage.

The Trans Politic has seriously reached some new lows against women, gays and lesbians. And for what? So a few guys whose dicks are so beyond use can now only get their kicks from being able to legally get into women's bathrooms, locker rooms and showers. Is your phallus REALLY worth that fucking much??

This from a Trans FB page regarding this misogynistic bill: 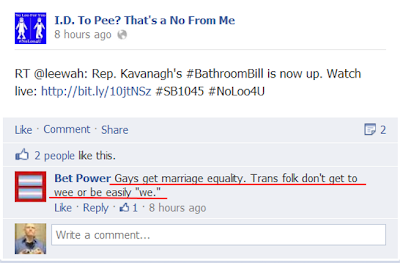 Last I checked I dont have the right to marry, nor do millions of other gays and lesbians in this country. Yet trans people have been legally skirting marriage laws by legally changing sex, a fucking LUXURY we do not fucking have! If the Trans politic were part of OUR gay and lesbian community not ONE would take advantage of their condition, not bloody one!

And if the above dont make you puke how about this: 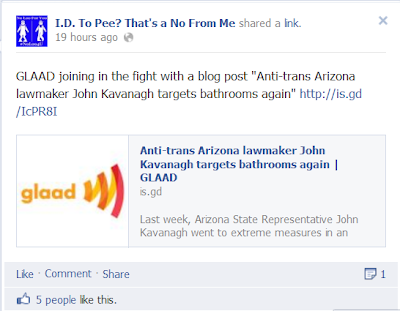 The Gay & Lesbian Alliance Against Defamation, who are suppose to be working for gay and lesbian issues with monies from many gay and lesbian pockets are now fighting trans battles. Looks like GLAAD is also against the legal rights of gays and lesbians to marry and the legal right to traumatize women/lesbians of rape by supporting this bill. If you are gay or lesbian who previously donated to GLAAD, you might wanna think twice going forward about where your hard earned money is going and what exactly is being done with your money!