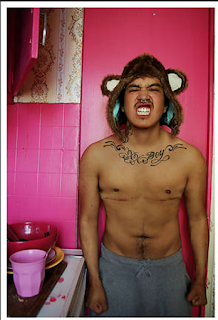 While I and others have written about the serial rapist Kael T Block (a French trans female) in the past, this was recently brought to my attention. Miss Block has a Facebook page dedicated to trans females called XX Boys, where she enjoys a 7100+ following via "likes". Miss Block's rape crimes arent exactly closet crimes, and her escaping prosecution in the US was written about in both feminist AND trans communities across the web. Yet despite her rapist notoriety her trans female FB project has 7100+ supporters including support from well know trans females such as Susan Lee aka buck angel. In other words, leaders from the transmale community are lending support to rapists who are transmen.

Regardless whether thousands of trans females are in support of a transmale rapist because of their own deep seated internalized misogyny which is at the root of their own transition. Or because these women feel their chemically created male privilege now entitles them to ignore and/or perpetuate violence against women, who can say. But what I can and will say is something is VERY wrong and VERY dangerous with this picture, made more dangerous for us given our gay and lesbian community is considered a part of this community. So while the trans community may be in full support of a rapist in their midst, I'm calling on any and every gay or lesbian human reading this to go to the XX Boys FB page and report it for the violence it represents towards (lesbian) women.

thank you for your help!