A very special young woman who has worked to go from thinking/feeling she was trans to embracing both herself as a female AND as a lesbian has emailed me this image taken from another young lesbian's Tumbr page: 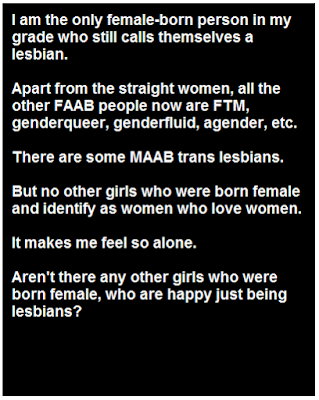 Not surprisingly this lesbian has been attacked by the queer/trans hooligans who ignorantly misread her message as "transphoic" rather than the sharp cry for lesbian pride and lesbian visibility that it is. Lesbian clearly is still dirty word and a serious threat to patriarchy.

You would be hard pressed to find a single lesbian only org. among all university in the US. Between uni's that have GlBT groups/orgs, the "L" is either silent or non existent. It is not at all uncommon for queer/trans females to attend lesbian meetings and/or dances outright ignoring LESBIAN in the "lesbian meeting" or "lesbian dances". Lesbian Studies have been completely removed from uni curricula and Women's Studies are nearly extinct in favour of Queer Studies or Gender Studies, both of which work to erase feminist gains from 2nd/3rd wave feminist and reinforce strict gender norms.

Leading lesbian figures both political and popular must begin extolling and reflecting lesbianism in a way to give rise to a lesbian visibility unseen before AND challenge queer/trans groups usurping lesbian identity and lesbian spaces. For if we do not, we will continue to lose young lesbians to a combination of misogyny and lezbophoia that takes shape in the form of transition. And for those who do not succumb to the trans disorder, these lesbians will just continue to be lost amid the queer alphabet.