Chaz Bono-Dancing with the Stars and the Promotion of Misogyny

A friend received this screen cap in her email and forwarded it to me: 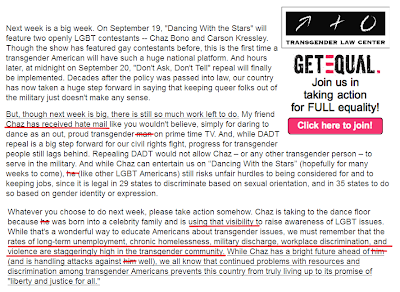 In this mass email sent by the Transgender Law Center  , they conveniently use both  Carson Kressley ( a gay celeb) and the repeal of Dont Ask/Dont Tell to bind together gay/lesbian/issues, in order to promote female self hater and long time wannabe celeb "Chaz" Bono (now in the never ending cycle of transition) to legitimate transition to the general public.

You weekly see here how YouTube alone is negatively affecting our female youths (trans trenders) who have no visible role models amid the conservative backlash against feminism by the advancement of hyper femininity/sexuality. Teens and young women have literally been left with what appears to be two options, the notion of transitioning to "male" or adapt to the masturbatory IDEA of woman, both of which in reality are unattainable. But celeb wannabe "Chaz" publicly parading herself weekly on Dancing with the Stars will send a sad sick message of trans possibility to all those girls and young women suffering, questioning and pondering where and how the hell they can ever fit into conservative hyper feminine role that is everywhere we look.

The Trans Law Center is also claiming that "Chaz" is receiving "hate mail" for her appearance on DWTS. While I do not doubt that she likely has, nowhere have we seen the Trans Law Center EVER announcing to the Trans community to refrain from making similar threats of violence and death to anyone (including myself) who dares to shed some sun on the reality known as "transition".

You can also see in the screen cap, this Trans Law Center also begrudges the progress of the repeal of DADT with regards to gays and lesbians, because the trans community has made no such progress. While that is certainly unfortunate, I have written about this particular issue as far back as a decade ago. And in that decade there has yet to be a single political movement by the trans community to serve in the military, while gays and lesbians have publicly fought and died for that right since the second World War.

The Trans Law Center goes on to whine that in 35 states they have no job protections based on "gender identity". The fact is, once in the constant transitional state, with their legal sex changed, they have MORE rights than many out gays or lesbians. If they are legally male or legally female they have the very same rights as any man or woman. Once transmen begin "passing" as male, they immediately receive male privilege both in and out of jobs, and for transwomen who do not "pass" (which is most) they continue receiving the male privilege they were accustomed to from birth.


But most importantly unnecessary medical "treatment" should NEVER be a choice making up for a lack of necessary social change. And utilizing the daughter of a celeb to do so is not only fucking sad, it is fucking abhorrent.