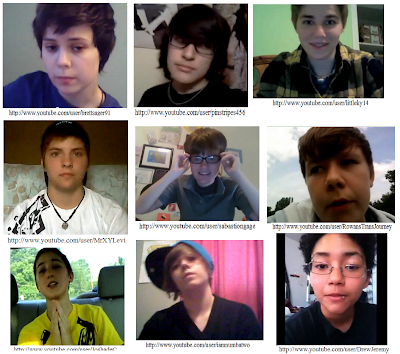 I'm going to use this space this week to also comment on the discussion post I started last week on these same posts.

I began the WIT posts because there has been a long held myth that most female transitioners were/are Butch (in gay/lesbian circles) or mannish women (per the general public). I wont go into the whys of the myth, but I will say as a Butch who has been in or around the Butch/Femme community for several decades, I knew the myth to be absolutely false. Youtube presented a way to dismantle the Butch/trans myth since there were no shortage of females using YT to glamorize their transition.

What became immediately apparent when looking at YT were the massive amounts of teenage girls and young women transitioning, none Butch btw. So what began and a simple way to illustrate who was actually transitioning, quickly turned into a weekly post illuminating a growing trans trend. A trend that hassteadily grown since I started the WIT posts, with ever more young females jumping onto the trans bandwagon weekly.

The girls chosen for each weekly post are properly represented by a pic (usually from their ftM intro video) accompanied by a link to said video. Only videos that are completely public, specifying  a desire to transition or in the early stages of transition and already using a male names/pronouns are used. Not one female has ever been made fun of by me, as I do not find female self hatred to be something one pokes fun at. It is as serious as it is tragic.

These posts have never been aimed at female transitioners, they have always been made to illustrate to lesbians and the general public just how serious an issue female transition has become post queer theory. I have said many times here before, I do not write for those floating in the ocean, but those still on the beaches who have a chance to be saved from drowning in the waters of female self hatred. If there are female transitioners who find something useful in my posts, great. But again, this is clearly a female centered space. If there are female transitioners regularly reading/commenting here, I would suspect it is because they truly do not believe themselves to be real men and are secretly searching for help and some kind of female closeness. Very few real men (if any) would have much interest in what is posted here.

So to sum up, these posts or any posts here, are not written for a trans audience. And the WIT posts are posted specifically to shed light on what has become a trans trend among young females sans any real feminism.

Email ThisBlogThis!Share to TwitterShare to FacebookShare to Pinterest
Labels: trans trenders, Trans Trending, who is transitioning