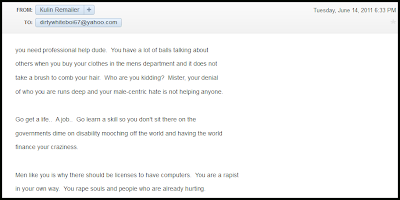 Received this as a response to my video based on my last post regrading GID. It is a good example of the typical responses I get from trans commenters, as many of you here know. But given my last post about GID and its symptoms and my next post dismantling GID's symptoms, I thought this comment fits perfectly in between.

The comment highlights the depth by which those who develop the trans disorder have ingested the spoon fed food of misogyny/gender conformity from patriarchy's plate. Actually believing short hair as being male only optioned or clothing as sexed, instead of mere outerwear based on personal style and tastes. It is also this same group, that is so hell bent on maintaining that kinda of simplistic social gender conformity that ironically professes practicing at the same time "fluidity" and "feminism". I ask you, does the above comment sound like someone who believes in "fluidity" and "feminism" or does it sound like the conservative rhetoric we've all heard spouted from the mouths of the right at gays and lesbians for far too fucking long?

Transition sprang out of homophobia, which we all know is rooted in misogyny and two thing you will NEVER find within misogyny are "fluidity" and "feminism".