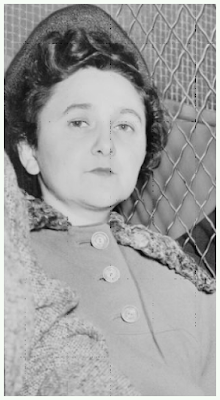 Ethel Rosenberg was murdered on this day in 1953 by the US government. I'm ashamed to say I hadnt heard if Ethel Rosenberg until I was 18 years old, through reading Sylvia Plath's novel the Bell Jar. The very first thing I read afterward, were the transcripts to the Rosenberg trial, and was absolutely disgusted and sickened by the blatant antisemitism and misogyny that tried, convicted and murdered Ethel.

I never fail to remember Ethel on this day. There is a candle burning for her spirit as I write this. If anyone is interested in learning more about Ethel's murder I suggest the documentary by her granddaughter entitled Heir to an Execution.

And in keeping with the spirit of this blog, which is to dismantle the social, medical and political reasons behind the development of the trans disorder and other issues created by the gender straight jacket, I say, think of Ethel as a warning. There have literally been hundreds of comments here by those in  transition regarding having been "diagnosed" by a "medical professional" or siting pseudo studies by the same "medical professionals" as proof of their really having been born in "wrong" bodies, proof because authority figures said so.

We're conditioned to believe authority figures have our best interests in mind, but historically and currently we have half the population being hurt by those 'best interests'. The US government unjustly murdered Ethel Rosenberg, and the male medical machine declared her alive after her first electrocution so that she could be electrocuted again, whereby the male medical machine once again declared her still alive. So yet again, another round of electricity could be circulated throughout her entire body until fire and smoke poured from her head finally ending her torture.

Authority must be questioned as much as it is followed, or as women, we fiery spirits, churning and burning within the confines of a body that drastically limits our choices, we all end up an Ethel Rosenberg.