A proud, concerned and angry mother recently sent me this post made in Cuntastic. Cuntastic claims to be a blog and zine exploring all things cunt and a journal of sexual and reproductive freedom. The mother who emailed me the link which is about the serious lack of resources for both the transfolk experiencing the childbearing year, AND the care providers (doulas, in this case) looking to support them, wanted to know my views on the subject.


First, I understand the anger of the woman who sent the link. Here you have some females (transmen) who with malice of forethought have medically and legally done everything humanly possible to not be female, having children, which only FEMALES can do. Then accessing or complaining of access to women's facilities with which to do so! As well as expecting/demanding women's facilities change or modify themselves to cater to their "special trans needs"!


Second, while I've never had the physical desire to bare a child myself, liking/enjoying children a great deal, I can understand why a female transitioner would desire to have a child and whats more, want to experience motherhood.

That said, given the necessary excessive do's and dont's regarding breastfeeding alone, due to the many containments that can harm a baby, it is infuckingsane to have been on T for any length of time and get pregnant. There are no short or long term studies on the effect T has on a developing fetus or child and it seems ftMs who have given birth arent exactly talking. But I suspect even if they were to, the info gleaned would like most info from transmen, have to be taken with a grain of salt.


Granted, there are many things that can go wrong during a pregnancy at any time of pregnancy. But doing something like T, that literally halts/harms the normal biological function of the female reproductive system cannot logically be good for a creating a baby. It is definitely a women's right to have a baby and as I said, I can understand the desire of female transitioners wanting a child, but risk harming the very thing you wish to create and love is irresponsible at the very least, selfish at the most.

Edit to add, I apologize for mistakenly adding the two now removed screencaps by mistake. I'm adding a few other screencaps and links for better clarification. 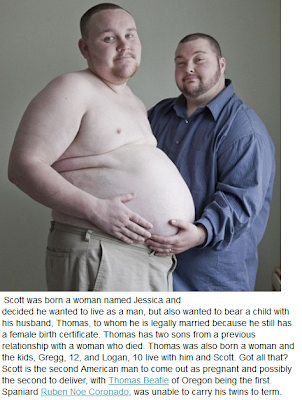