All this comes to me via email from another lesbian who has been silenced by the Trans Brigade. Some of it comes from an emotional place, a place that is obviously still somewhat hurt and angry. But it goes much further than the basic pain and anger one experiences due to a break up, which is why I bring this to you. It doesnt take much to see that beyond the end of thisa relationship between two females, there is a perfect profile of a Trans Trender.

Like all good tales, I'll start at the beginning. The lesbian in question (and I do consider her a lesbian regardless of her experience with this transman) told me this when asked how it was she as a lesbian wound up in a relationship with a transman:

It was a late afternoon and all I wanted was a cold cider (they do wonderful tap cider up north) and to meet a woman. And this person came in with friends near to the place I was and "she" catched my eyes. I was updating my FB profile on a free Mac they provided there and I remember having written: "ah a nice creature came in :)". We finally talked to each other and the punk rocker lesbo I thought I have met told me in fact with a female voice she was a "he" (this person was pre-everything when I met her: boobs and no T). we spent the night together with his friends and ended up at my hotel (without the friends ;). That is how it started.

She goes on to add:

The sexuality we had was very lesbian sexuality (if there is any). It is not someone who wants his vagina removed apparently :) So I think I thought "ok you are trans" like someone would say to republican lesbian, "ok you are republican but I still want to make love to you/f* you as you are hot". (I am democrat ;) It starts like this because people live an attraction and they don't pay so much attention to the gender queer talk. That how you switch from women to dating a transguy once.

Here is the gist of an email she wrote to me:


I write this email to you in the hope you will publish it on your blog as you are my last chance to be heard as a woman and an ex-female partner of a transguy. This email is warning for all previous and current partners of FTM or women who have questioning/doubts about a potential affair with a FTM.

English is not my mother tongue so sorry if my points are not clear or badly written.

I used to be engaged to one of the guy whose female partner is making videos on TmatesFTM. Our relationship broke-up 2 years ago. Time has passed by and I am now happy with someone else.

So when I saw that he was pushing his new girlfriend to do videos on TMatesFTM, I was naive and thought it could be also a great way to share my own experience with this transguy as commenter of the different topic oriented videos.

By sharing my own experience, I don't mean childish angry stupid comments: no! I am a middle-aged woman and a grown-up.
I mean I thought it may be great to interact with the different topics oriented videos and give another point of view than his current partner for the same transguy.
As I had the time to think about this relationship and its impacts on my life, I thought it may be useful for other women partners of FTM and I was eager to give my own experience....

But every time, I wrote meaningful and respectful comments on this TmatesFTM channel to give a different perspective, they were not published. It was a loss of time and of my energy because I had to watch the video, to write them in English and every time I thought it may start a nice/interesting discussion, they were never ever published. They accepted only low end comments like: "great video", "you did well"...

As a consequence, I came to the conclusion TMatesFTM gives a biased vision of FTM/partners relationship as TMatesFTM censors interesting comments of ex-partners.

It is new and very surprising to me as I used to watch TMatesFTM when I was with this transguy 2 years ago and at that time, I would never had suspected TmatesFTM would have been a promotion channel of “partnering with FTM”. I thought in opposite I could find support and a neutral/safe place as a partner of FTM. I thought it was a discussion community and channel for women.

I understand now the only mission of TMatesFTM is to give an unrealistic very pink very positive picture of FTM as partners. TmatesFTM is not a SOFFA place at all and certainly NOT a support channel for present and past partners of FTM. It is certainly NOT an open minded place where we can virtually meet-up and share what we think with respect for each other's point of view whatever they may be.

I am writing you to warn women who may watch this channel and may wrongly think, like I used to think 2 years ago, they have found a women only space and so to warn them: "do not believe all what you see/hear on this channel".
TMatesFTM is not a women space: it is almost a cult like initiative whose only purpose is to serve FTM not their partners.

And I truly hope you will publish my email because you are my only chance for the truth to be heard and I don’t want other women to believe their hear/see the truth of a FTM/partner relationship on TmatesFTM like I used to believe 2 years ago. If I had known at that time it was biased, I would have lost less time watching those videos and more time listening to myself and some of my closed friends 'advices and relatives.

I wrote TMatesFTM a Youtube message to understand why they were censoring me and they told me my ex-partner, this transguy, did not want my comments to be published even if they were interesting and not offensive.
So the person who has the final decision on TmatesFTM is the guy not women…
It is called patriarchy in my country and it has been eradicated 40 years ago where I live.
I would never suspected patriarchy would come back online triumphally and via female to male transitioners ie people who know what is like to be oppressed when you are female bodied....

Thank you for your consideration,


A screencap of one of her comments: 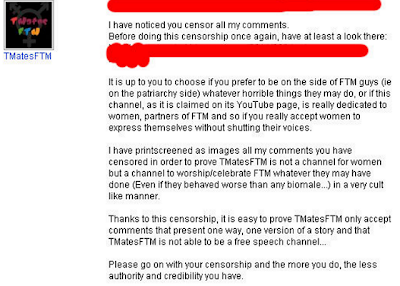 She discusses in further detail this break up in her own blog by saying:


He dumped me because I was asking him to give his position about fatherhood through a wall discussion on FB. I am a middle-aged woman so the clock was ticking and as I was to the point of moving to live close to him, I just wanted to know if he was serious about his commitments and if he was serious when he said we will have kids together.
His friends made the FB discussion the worse couple discussion of my life and he broke-up like a coward by msn and sms the same day based on his friends' advices.
And on the "right" timing: a few days before X-Mas when he was supposed to come and visit me, my friends and family for 2 weeks...
Then I learnt many things about him through some of "his friends": he cheated on me with a MTF (typically Mike), was telling different things to me and them.
And the best: he described me as mentally ill. He was so coward to face the break-up consequences (I think he did not expect I could react differently than the 20's women he had dated so far), he refused to see the pain he had inflicted me, he closed any possibility to have an adult peaceful talk/closing by using the old good "she is a female with hysteria" sentence. This "hysteria/she is too emotional/she is mentally ill" sentences are used by males for ages to silence women when those women try to make their points respected...

...We were engaged at the time of the break-up as he always pushed me for more commitment: he was the one who wanted to brag about our couple and then our engagement on FB and at the University. I imagine it was, at that time, a good validation of his malehood and it valued his ego to say he was dating an average (not a dyke) middle-aged executive woman while he was just a student and pre-everything at that time.

I spent some time one the TMates thing yesterday, and there are several things that stand out. The first is no matter the age of the TMate the maturity level is very low, and second is the same point the woman above makes, Tmates seems more about using women to create, prop up and help to maintain the "maleness" and "manhood" of those the TMates are dating than any actuall honest discussion about the myriad of issues a female faces when dating a female on a lifetime of T.


Seeing how this is getting a tad long I will break this up into two parts. Part 1 centering on how a lesbian found herself in a relationship with an ftM to disastrous effects and Part 2, the ftM in question before transition and during.