One of the the many "trans-academic" lists I'm on posted this recently: 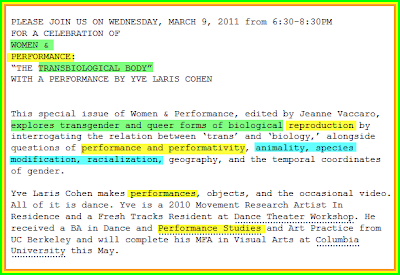 Even trans academics admit and as indicated here are now teaching that trans individuals are "performing" there chosen sex rather than actually be BORN trans. Actually according to trans academics"performing" trans(male/female) is the same as those who "perform" animality, species modification,(and) racialization. Meaning there is no difference between a person who uses drugs and cosmetic surgeries to perform being a white person to that of being black, a human to that of being a lion or a female to that of being a man. It is ALL a PERFORMANCE! The body then is used as a stage to exorcise mental illnesses and utilizes the male medical machine for props in order to bring about some realness to the character being performed.

As a lesbian, what stride, what legal hurdles has the trans community helped us to achieve??