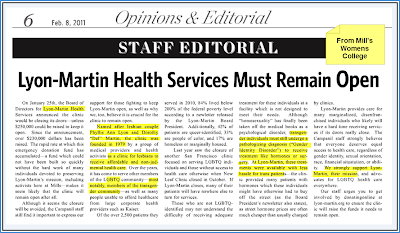 This from a recent editorial from Mills "womans" college regarding the Lyon Martin Health Services. LMHS's has been trying to raise money so that it can continue to dole out "hassle free" drugs and mutilations to those in need. Mind you this health service was originally founded to help lesbians and specifically named after the feminist lesbian couple Del Martin and Phyllis Lyon.

Del Martin and Phyllis Lyon were NOT "well known "LGBTQ activists", they were/are well known FEMINIST LESBIAN activist! Yet another radical lesbian couple who history, commitment to lesbians and lesbian feminism has been swallowed up and revisionized  by the "queer" alphabet soup and whose name is being used to commit some of the most misogynistic lezbophobic brutalities against the vulnerable.

If we do not stand up against this unremitting lesbian revisionism that has taken place since postmodernism birthed queer theory, the little we have left of a lesbian history is going to be permanently erased and replaced.