Since Twiggy first hit the run way and the cover of ladies magazines everywhere, anorexia has sky rocketed! According to wiki, Twiggy's "career quickly took off.[19] She was 5'6" tall (short for a model), weighed a mere 6½ stone (41 kg, 91 lbs) and had a thin, boyish 31-22-32 figure". By today's standards Twiggy would be a cow as her weight wouldn't dangerously put her in close proximity with death's door like today's top models. But what happens when today's anorexic models, aren't thin enough? 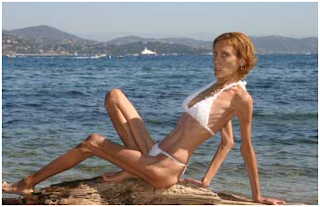 When models like the late Isabelle Caro are asked to lose 10 pounds? Why then you simply get a MAN to do the less than adequate job female models arent able to perform due to their biology. Enter Andrej Pejic, a biological male whose male biology (tall, lean muscled, naturally low body fat, no pesky periods to maintain body fat for and tiny male hips) is being utilized to model designer female clothes that female models cant starve themselves into.

What kind of message is this sending to females, particularly young females easily influence by high and pop culture? That if they trade in their womanhood for manhood they too can be superior to the inferior female creature? Is it a mere coincidence that anorexia and other eating disorders run rampant throughout ftM communities everywhere?

If we look at the big picture confronting us, this is yet another kick in the face of all women, of all races, everywhere.