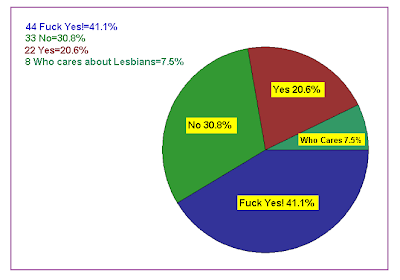 Nearly 62% of those who voted feel that the National Center for Lesbian Rights NCLR should serve strictly Lesbians, reflecting both its name and the purpose for which the org. was originally founded. I find this to be a very high number given the amount of trans readership of this blog. Which makes me think, were large samples of the lesbian communities made aware of the deceptive nature of the NCLR that number would be even higher.

I have already received a few emails and a handful of Facebook messages from lesbians who were not aware how strongly malecentric in both staff and cases that the NCLR is and going forward swore they will no longer financially support such malecentrism. The lesbians I'm speaking of were aware that the NCLR did take on cases that  were gay male and/or trans related, what they were NOT aware of was the high volume of such cases at the expense of lesbians.

I also received what reads to me like a polite passive-aggressive email from the exec. director of the NCLR which I'll share in the (part 2) NCLR post I'll try to have to you no later than Saturday.

There seems an overwhelming response from lesbians expressing that we did not and do not know how UNlesbian this org is, even though the National Center for LESBIAN Rights is USING our very lives to sell their false products/promises. I know we have for some time now been lacking in REAL Lesbian community, both in spirit and heart. We feel our identities, that special entity which creates community, have been colonized and brutalized by queer/trans groups for decades now, the same groups the NClR supports. I cant even put a number on the amount of lesbians who have expressed to me alone a desire to distance themselves from identifying as lesbian! We all know a handful of these women, maybe you're one of those women.

I was only a kid when lesbian feminism was coming into its own, when lesbians across the country and even the world were coming out in droves and finding one another. Finding each other through snail mail and lesbian chapbooks, lesbian magazines without all the fucking gloss, through bars, through sports and through love. There was no world wide web, yet lesbians were finding each other, creating communities and joining other lesbian communities in an us against them collaboration. Then gay men came along, with their all their male privilege and smooth talked us right back into that good girl civility, a civility that we were just beginning to leave behind. A civility patriarchy instilled in us before we could walk or talk, "be a good girl" we were told, we barely tasted the freedom to just be us, without feeling obligated to perform for men. When the men we felt we could trust most, gay men, told us that by being radical no one would listen, no one would take us seriously, that we should pool our efforts and along with using their male privilege our sorry and often times sub human existences would change.

Well ladies, they were right. It has changed. Fitting into polite society was/is the gay male dream, it was never ours, nor within patriarchy could it be. We tried so hard, we fought, but what we were working toward and fighting against was ultimately for men; our needs, our hopes, our dreams never figured in. Somewhere we just gave up, we let ourselves be led, we listened, we folded our hands in our laps and crossed our legs just so and we lost our identity. Like a strong independent woman, who once married didnt think much at first about picking up her husbands dirty draws off the bathroom floor, or making him dinner even though she works too, its a partnership she thinks to herself, she works to convince herself its a partnership till she just does what she does, house work, child care, laundry, chores etc. Sometimes who she was before comes flooding back to her, but her hubby is always there to remind her how lucky she is and how far she has come. This is what I despise about places like the NClR and all other "queer" organizations, lesbians are always forced or pressured or expected to be the fucking dutiful housewives who should count our fucking blessings that we have been chosen to pick up their shit stained tightie-whities from the mucky floors all the while with a smile on our chops!

I think we just need to admit that we fucked up and move forward by moving backward. There was so much promise in those early days of collective lesbianism, so many great ideas (and NO I'm not talking about separatism-bad idea-bad bad bad) so much energy, drive, shared experiences, learning new experiences together. With the internet we can reach so many more lesbians than our fore-lesbians had, we can be effective in ways they probably didnt even dream. But before we can do any of that, before we can reach for our sisters hand and take a giant step forward, we MUST take back our name.

My name is Lynn and I am a Lesbian.

Email ThisBlogThis!Share to TwitterShare to FacebookShare to Pinterest
Labels: NCLR