ncI have been meaning to write something on the NCLR for a while now. If you arent familiar the NCLR is The National Center for Lesbian Rights. Sounds great right? LESBIAN rights and a NATIONAL center devoted to the multitude of ways lesbians are discriminated against daily, from jobs, to housing to lesbian mothers who are losing their children everyday in this country alone. Well, do not let the name fool you, this organization does very little for lesbians, this org. has buried lesbian issues and drowned our lesbian presence beneath the same QUEER alphabet soup that has been drowning us for the last 20 years.

I joined the NClR's Facebook page recently to see if their FB ran anything like their website, i.e. concerned primarily with gay men and trans issues. Their FB page does regular posts about issues the org is currently dealing with or interested in. I joined a few weeks ago, and have yet to see any post that is specifically lesbian oriented! That to me says either one of two things, nothing is happening for lesbians everywhere or queer/trans/gay issues are being placed above lesbian issues therefore lesbians arent making any progress anywhere. At any rate I made a few comments on a few of their posts asking why the gay male or trans posts were being posted on an organizations page that calls itself a national center for LESBIAN rights. I received this message from a MAN no less: 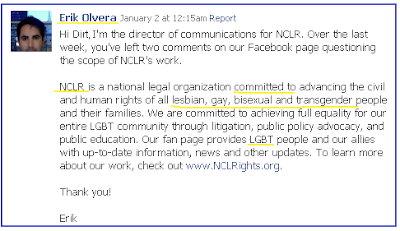 Interestingly HE lists "lesbian" first, yet if you check their past and present case load it consists of nearly every case being either gay male related or trans related with a few token dyke cases thrown in.The L very often is placed at the front of the queer alphabet soup mix yet over and over and over again "lesbian" figures last or more often recently not at all among the mix. It is a deliberate queer ploy used to give lesbians the impression that they/we figure in when in truth we figure no where. Lesbians are the biggest threat to patriarchy and its misogynistic systems, our very natures are an affront to maintaining those systems, which is why we continue getting buried or erased by "queer progress". Queer ideology in the face of patriarchy and misogyny is just more of the same, it is merely another branch on the patriarchy tree. A branch that uses instead of an ugly in your face brute force, flat out shame or blatant sexism, deceptively uses buzz words like "queer", "feminism", "homophobia", "butch", "femme", "queer rights" etc, that early on lulled lesbians into a false sense of solidarity.

A sense of solidarity that created a "we're all in this together" queer atmosphere that led lesbians to believe if they/we gave our time and money to queer causes and queer rights groups OUR causes, OUR needs, OUR rights were being looked into, supported and changed for the better. We were also led to believe that the more letters added on to the queer alphabet soup meant more folks are going to be there fighting for our causes, our needs and our rights with their time and their money and their passion in the same way we have for theirs. Instead we've woken up some twenty years later like some lesbian Rip Van Winkles to find we've made no major gains in lesbian visibility, lesbian rights or political lesbian presence. What we've also woken up to find is that we are the smallest letter of and at the bottom of, the queer alphabet soup bowl!

And before someone yells what about DADT or "gay" marriage in some states. Had even half of the gays and lesbians in the military came out since we invaded Iraq the military would have repealed DADT itself because it couldnt afford to lose that many soldiers! And personally I do not consider it progress because now gays and lesbians can freely serve in the military. The male military machine was created to enforce male centered politics and privilege with as much gusto (or more) as "defending" our country. The military has long been an area that has given lesbians a place/paying wage, but it is and remains at a high price to both women and lesbians! Becoming a cog in the male military machine isnt progress, progress would be creating or opening up womencentric/lesbiancentric jobs.

And "gay marriage" is a joke! Marriage historically and in many places still is today if not in legal practice than in ideology a patriarchal system utilized to hold women down, keep women down, keep women under the power of males, legally allow men to take ownership of their property and whatever rights they had/have. Now I don't know about any other lesbian out there but personally when I meet the lesbian I give my whole too and received hers in return, I do NOT want that tainted with anything that past, present or future was/is used against women or used to harm women! Gay marriage isnt "progress" for lesbians, progress for lesbian unions would not only recognize and celebrate the unique love between two lesbian females, it would do so while giving us the basics rights and benefits available to any other legal couple.

Getting back to the NClR, I responded to (Erik's) message asking him did the org have any plans on changing their name to reflect who they truly are representing because their name as it stands is quite deceptive, and two days later I havent heard anything back, which to me speaks volumes.

I will write more about the org itself, what it espouses and who is working for them in part (2) of this subject coming in the next day or so.

Email ThisBlogThis!Share to TwitterShare to FacebookShare to Pinterest
Labels: NCLR