The Lesbian Community and the Trouble with Trans(men) 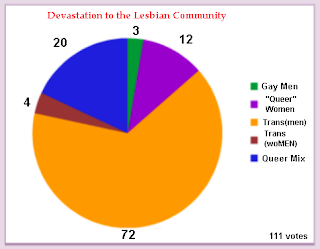 Here is a pie chart of Friday's poll with an overwhelming majority choosing transmen as the largest cause for the plundering of the Lesbian community. Lesbian have long remained strong against keeping out male transitioners and rightly so, but we were lax when it came to female transitioners with a lesbian history.

Young lesbians everywhere are suffering, lost and without a community because we failed to keep our community safe from men, any man or females calling themselves men. We have been shamed, threatened with violence and rape and screamed at for "transphobia" whenever we spoke up and declared ourselves Lesbians. Lesbian has become a dirty word, and those of us who refuse to "queer" ourselves by standing our lesbian ground, dirty with it.

We have a future to create, what would you like to see change for lesbians/the lesbian community? And what are you prepared to do to make those changes happen?

This is an open post for the female bodied.