More "Who is Transitioning" 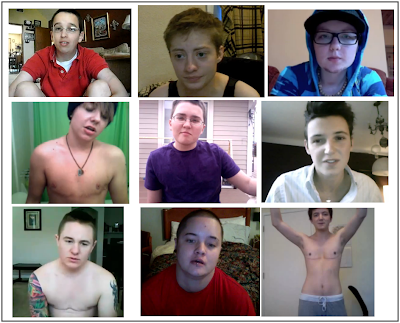 With the ever growing numbers of female youths jumping aboard the trans trend bandwagon, I'm going to start regularly posting a general look at just who is succumbing to this trans trend by putting a face on the young girls/women who are doing so. All the boys girls here are on testosterone and most have had their breast butchered off, none from the info available, appear to have had hysterectomies. Which means the longer they continue injecting large doses of synthetic testosterone, the greater their chances of developing PCOS/Cancer,  a hormonal syndrome caused from hormonal changes, in the case of transmen deliberate hormonal changes due to injecting synthetic testosterone.

Some facts about PCOC:

Characterized by multiple abnormal ovarian cysts, PCOS symptoms include high levels of insulin which stimulate the ovaries to produce large amounts of the male hormone testosterone.

Polycystic Ovarian Syndrome causes disruptions to the normal menstrual cycle - irregular menstrual periods and the absence of ovulation cause women to produce estrogen, but not progesterone. Without progesterone, which causes the endometrium (the lining of the uterus) to shed each month as a menstrual period, the endometrium may grow too much and undergo atypical cell changes. This is a pre-cancerous condition called endometrial hyperplasia. If the thickened endometrium is not treated, over a long period of time (this time period is dramatically shortened in transmen) it can develop into endometrial cancer.

Studies have shown that women who have never been pregnant have up to three times the risk of developing endometrial cancer.

Any doctor playing fast and loose with their patients health by providing (trans) females synthetic testosterone while they have not had a full hysto should have their license revoked!