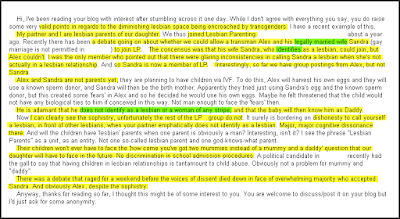 From a recent email, yet another violation of lesbian spaces by a trans/queer community member. What disturbs me more than this trans(man) using his queer (straight) wife to violate this lesbian parenting group is that when push came to shove, the lesbian parents as a majority acquiesced to the trans(male) shoving!

Trans(men) coming from a lesbian orientation clearly still see themselves as lesbians, and by the nature of lesbianism itself, women as well, despite all their protests to the contrary. I say this not to be a jackass, but because of the large number of lesbians who transition that refuse to leave the comfort of lesbian/women's spaces. Other than some total pervert, what real man do you know that prefers to spend all their time in women's spaces, women's spaces both private and public?

This certainly goes against the "standards of care" regarding transgender/sexuals, the whole point of transition IS transition! As in going across, not putting one foot in the water while the other foot stays dryly on land, thats called straddling, these women are straddlers. These are serious issues that need to be brought to the attention of the medical officials that treat this disorder,(yes I'm working on it) because clearly transition isnt working, at least with regards to the lesbians transitioning.


Now, that aside and more directly to the email, lesbians need to grow a damn backbone. There is nothing wrong with having LESBIAN ONLY spaces! Even if you are a lesbian who supports trans issues, it doesnt make you "transphobic" to demand bio lesbian only spaces, it makes you a lesbian and nothing more. How dare this trans(man) or any trans(man) utilize patriarchal tactics to abuse lesbians with in order to gain (remain) access(ed) to lesbian spaces. This trans(man) also added insult to injury by parading his "legal marriage" in front of this lesbian only group who do not have the legal couples/parental options that he has. That to me goes far beyond poor taste and well into the realm of straight male privilege, not exactly lesbian is it?


For as much as it pains me that there are females out there suffering due to being convinced that they are "born in the wrong body", I make no fucking excuses for those women who've transitioned who then utilize their new found "male privilege" to abuse/invade lesbian/women with. It isn't "transphobic" for lesbians to accept/view/treat trans(men) as men by expecting those men to stay the fuck out of lesbian (women) spaces. And its a sick fucking mockery when trans(men) use "transphobia" as a battering-ram to lesbian spaces when there are trans people out there who've actually been murdered/assaulted to due transphobia.